The simple past is a verb tense that is used to talk about things that happened or existed before now. Imagine someone asks what your brother Wolfgang did while he was in town last weekend.

Wolfgang
entered a hula hoop contest.
He
won the silver medal.
Here’s a tip: Want to make sure your
writing shines? Grammarly can check your spelling and save you from grammar and punctuation mistakes. It even proofreads your text, so your work is extra polished wherever you write.
Your writing, at its best
Grammarly helps you communicate confidently
Write with Grammarly

The simple past tense shows that you are talking about something that has already happened. Unlike the past continuous tense, which is used to talk about past events that happened over a period of time, the simple past tense emphasizes that the action is finished.

Wolfgang
admired the way the light glinted off his silver medal.

You can also use the simple past to talk about a past state of being, such as the way someone felt about something. This is often expressed with the simple past tense of the verb to be and an adjective, noun, or prepositional phrase.

Wolfgang
was proud of his hula hoop victory.
The contest
was the highlight of his week.

How to formulate the simple past

For other irregular verbs, including the verb to be, the simple past forms are more erratic:

The good news is that verbs in the simple past tense (except for the verb to be) don’t need to agree in number with their subjects.

Wolfgang
polished his medal. The other winners polished their medals too.

How to make the simple past negative

Fortunately, there is a formula for making simple past verbs negative, and it’s the same for both regular and irregular verbs (except for the verb to be). The formula is did not + [root form of verb]. You can also use the contraction didn’t instead of did not.

Wolfgang
did not brag too much about his hula hoop skills.

The third-place winner
was not as happy as Wolfgang.

The fourth-place winner wasn’t happy at all.

The onlookers were not ready to leave after the contest ended.

The contestants weren’t ready to leave either.

How to ask a question

The formula for asking a question in the simple past tense is did + [subject] + [root form of verb].

Did Wolfgang win the gold medal or the silver medal?

Where did Wolfgang go to celebrate?

Did the judges decide fairly, in your opinion?

When asking a question with the verb to be, you don’t need the auxiliary did. The formula is was/were + [subject].

Was Wolfgang in a good mood after the contest?

Were people taking lots of pictures?

Common Regular Verbs in the Past Tense

Common Irregular Verbs in the Past Tense 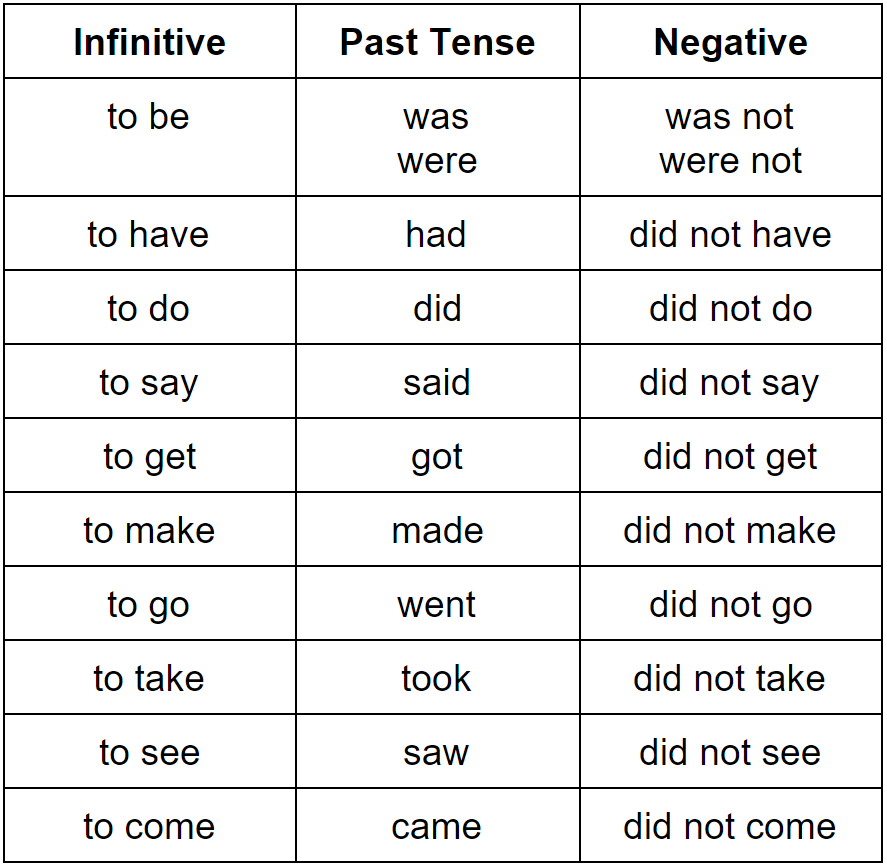 What is the simple past tense?

The simple past is a verb tense describing events that already happened.

What are some examples of simple past tense?

“I ate cereal for breakfast this morning.”

“Morganucodon was an early mammal that lived with dinosaurs.”

The simple past tense can only express actions in the past. However, you can show current ongoing actions that started in the past with the present perfect continuous tense (e.g., “I have been working there for twenty years”).