The 8 Parts of Speech: Examples and Rules 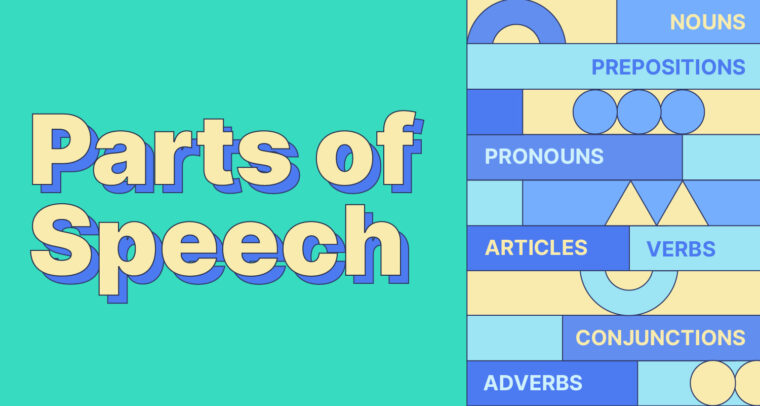 ​​Every word is a part of speech. The term “part of speech” refers to the role a word plays in a sentence. And like any workplace or TV show with an ensemble cast, these roles were designed to work together.

Read on to learn about the different parts of speech that the words we use every day fall into, and how we use them together to communicate ideas clearly.

The 8 parts of speech

A noun is a word that names person, place, concept, or object. Basically, anything that names a “thing” is a noun, whether you’re talking about a basketball court, San Francisco, Cleopatra, or self-preservation.

Pronouns are the words you substitute for specific nouns when the reader or listener knows which specific noun you’re referring to.

You might say “Jennifer was supposed to be here at eight,” then follow it with “she’s always late; next time I’ll tell her to be here a half-hour earlier.”

Instead of saying Jennifer’s name three times in a row, you substituted she and her and your sentences remained grammatically correct. Pronouns are divided into a range of categories, and we cover them all in our guide to pronouns:

Adjectives are the words that describe nouns. Think about your favorite movie. How would you describe it to a friend who’s never seen it?

You might say the movie was funny, engaging, well-written, or suspenseful. When you’re describing the movie with these words, you’re using adjectives. An adjective can go right before the noun it’s describing (I have a black dog), but it doesn’t have to. Sometimes, adjectives are at the end of a sentence (my dog is black).

Go! Be amazing! Run as fast as you can! Win the race! Congratulate every participant who put in the work and competed!

These bolded words are verbs. Verbs are words that describe specific actions, like running, winning, and being amazing.

An adverb is a word that describes an adjective, a verb, or another adverb. Take a look at these examples:

Here’s an example: I entered the room quietly. Quietly is describing how you entered (verb) the room.

Prepositions tell you the relationship between the other words in a sentence.

Here’s an example: I left my bike leaning against the garage. In this sentence, against is the preposition because it tells us where I left my bike.

Here’s another example: She put the pizza in the oven. Without the preposition in, we don’t know where the pizza is.

I like marinara sauce. I like alfredo sauce. I don’t like puttanesca sauce. Each of these three sentences expresses a clear idea. There’s nothing wrong with listing your preferences like this, but it’s not the most efficient way to do it.

In this sentence, and and but are the two conjunctions that link your ideas together.

A pear. The brick house. An exciting experience. These bolded words are known as articles.

Like nouns, articles come in two flavors: definite articles and indefinite articles. And just like the two types of nouns, the type of article you use depends on how specific you need to be about the thing you’re discussing.

A definite article describes one specific noun, like the and this. Example: Did you buy the car?

Now swap in an indefinite article: Did you buy a car?

See how the implication is gone and you’re asking a much more general question?

Figuring out parts of speech

Sometimes, it’s not easy to tell which part of speech a word is. Here are a few easy “hacks” to quickly figure out what part of speech you’re dealing with:

And if you’re ever really stumped, just look the word up. Dictionaries typically list the part of speech a word fits in its entry, and if it fits more than one part of speech, both are listed with examples.

That brings us to another common issue that can confuse writers and language learners:

When a word is two different kinds of speech

Just like y is sometimes a vowel but sometimes a consonant, there are words that are sometimes one part of speech and other times another. Here are a few examples:

And sometimes, words evolve to fit into new parts of speech. One recent example is the word “adult.” Before the 2010s, adult was primarily a noun that referred to a fully grown person. It could also be used as an adjective to refer to specific types of media, like adult contemporary music. But then, at right about the turn of the 2010s, the word adulting, a brand-new verb, appeared in the internet lexicon. As a verb, adulting is the act of doing tasks like paying bills and grocery shopping.

The parts of speech fall into two word classes: open and closed.

Closed word classes are the parts of speech that don’t regularly add new words. These parts of speech are more “set in stone” and include pronouns, conjunctions, articles, and prepositions.

Are you using the parts of speech correctly? Check your grammar and find out!

You don’t have to guess whether you’re using certain words correctly or breaking grammar rules in your writing. Just copy and paste your writing and get instant feedback on whether your sentences have misspellings, punctuation errors, or any structural mistakes.