How to Write Better Sentences 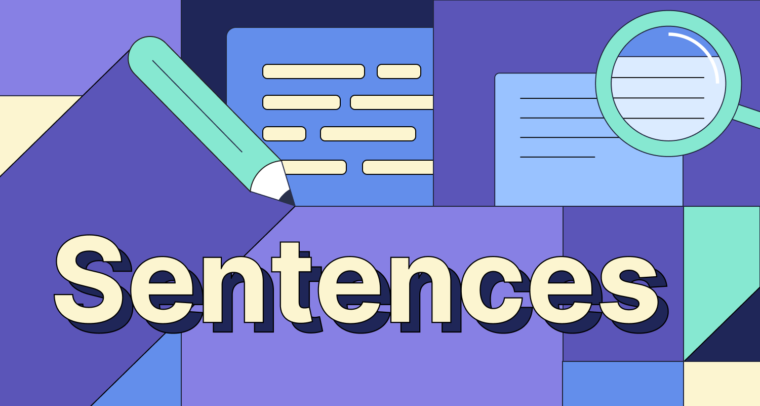 After hundreds of thousands of years of linguistic evolution, the sentence is perhaps our strongest way to share a single thought. It’s the default tool for communicating when a lone word isn’t enough.

We all have a natural intuition when it comes to forming sentences, yet so few of us know the proper techniques and stylistic choices available. In this article, we explain everything you need to know about sentences (in English, at least), including different sentence types and constructions. Then we explain how to avoid common mistakes and take your sentence writing to the next level.

Write with confidence
Grammarly helps improve the clarity of your sentences.
Write with Grammarly

What is a sentence?

At its core, a sentence is a string of words used to express a complete thought. There’s a lot of flexibility about what constitutes a sentence, but the central rule is that it must contain both a subject and a verb—and even that rule is bendable for imperative sentences, as you’ll see below.

Let’s start with the four main types of sentences:

1 Declarative (statement): This is a standard sentence that points out a fact.

2 Interrogative (question): This is a sentence asking a question.

Example: Why won’t that dog sit?

3 Exclamatory (exclamation): This is a modified declarative sentence used to add emphasis or show emotion, urgency, or high volume.

Example: I’ve tried everything, but that dog still won’t sit!

4 Imperative (command): This is a sentence telling someone or something to do an action. The subject is assumed, so you don’t need to include it.

Before we break down sentence structure, we have to discuss an element crucial to forming sentences: the clause.

A clause is a group of words that contains a subject and verb (except for some imperative clauses) and can be either independent or subordinate. An independent clause can exist as a complete sentence on its own, whereas a subordinate or “dependent” clause can not.

First is your basic sentence: a standalone independent clause with a subject and verb. Note that a simple sentence can contain two subjects or two verbs, but not two of each.

Example: King Kong and Godzilla destroyed the city because they were fighting.

A compound sentence combines two independent clauses using a coordinating conjunction like the FANBOYS (For, And, Nor, But, Or, Yet, So) or using a semicolon. It’s essentially two simple sentences joined together.

Example: King Kong didn’t want to destroy the city, but Godzilla enjoyed it.

Example: After King Kong mustered all this strength, he threw a final punch and Godzilla fell.

To help improve your sentences, here are five of the most common sentence mistakes and expert advice on how to resolve them.

Also known as “fused sentences,” run-on sentences occur when clauses are mashed together without the proper connecting words.

To fix a run-on sentence, you can simply apply the right conjunctions. If the sentence still seems awkward or too long, try breaking it up into two or more sentences.

Sentence fragments occur when a sentence is incomplete—if it lacks a subject or a verb, or if it’s a subordinating clause by itself.

To fix a sentence fragment, just identify what’s left out and add the missing part. Make sure your sentence has both a subject and a verb (unless it’s an imperative sentence), and if it’s a subordinating clause, try hooking it to a related independent clause.

In most cases, you can fix this and have subject-verb agreement just by adding or removing the plural s. The problem is that sometimes this error is hard to find. One common example of this is describing a singular subject with plural words.

Example: A mixture of blood, sweat, and tears leads to success.

The subject is mixture, which is singular, and the verb is leads, which is also singular. Don’t get fooled by “extra” words like blood, sweat, and tears—even though they are plural, they don’t make the subject plural.

You often hear people telling you it’s wrong to end a sentence with a preposition, but that’s not entirely true. In formal writing like school papers it’s frowned upon, but usually, it’s perfectly acceptable—sometimes, even preferable.

For starters, prepositions always need an object; if you end a sentence with an objectless preposition, you risk sounding unclear. For example, if you wrote, “The bird flew above,” your readers would wonder, “Above what?”

Example: Five excited puppies are almost too many to put up with.

This sentence is fine because the phrase still has an object, even though the object comes first. Phrasal verbs are also frowned upon in formal writing, so you shouldn’t put them at the end—or the beginning—of a formal sentence anyway.

Although not technically a grammatical error, passive voice is a sign of unassertive writing. In passive voice, the subject of a clause receives the action. The main verb appears as a participle plus a form of “to be.”

Example: A touchdown pass was thrown by the quarterback.

Now, consider that same sentiment written in the active voice:

How Grammarly strengthens your sentences

Mastering the principles of writing clear and grammatical sentences takes practice: the more you do it, the better you get. But what about that paper due at the end of the week? Or, that important email you have to send at the last minute?

Wherever you write, Grammarly’s suggestions make your sentences clearer and engaging, so your writing is polished and professional.