Everyone knows the problem with spell-check: your word might be spelled right, but it may be the wrong word. English is full of confusing words that sound alike but are spelled differently. It’s also full of words that share similar (but not identical) meanings that are easy to misuse. Below are some of the most commonly confused and misused words in English.

Here’s a tip: Looking for a specific pair of commonly confused words on this page? Use ctrl+F or command+F to search the page quickly. 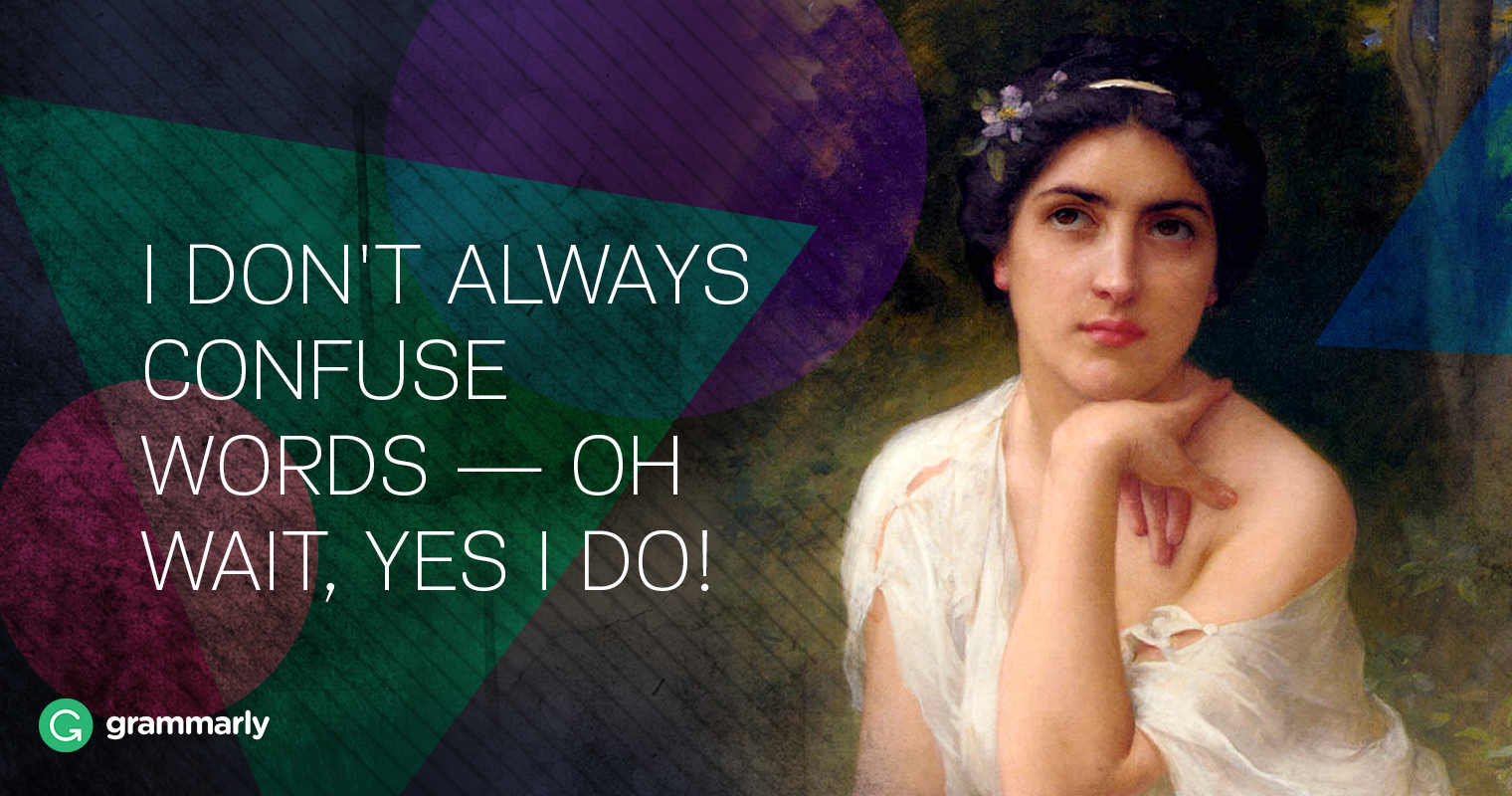 Affect/Effect Affect is usually a verb: Chester’s humming affected Posey’s ability to concentrate. Effect is usually a noun: Chester was sorry for the effect his humming had. If you find yourself stumped about which one to use in a sentence, try substituting the word “alter” or “result.” If “alter” fits (Chester’s humming altered Posey’s ability to concentrate), use affect. If “result” fits (Chester was sorry for the result his humming had), use effect.

Among/Amongst Among is the preferred and most common variant of this word in American English. Amongst is more common in British English. Neither version is wrong, but amongst may seem fussy to American readers.

Among/Between Among expresses a collective or loose relationship of several items: Chester found a letter hidden among the papers on the desk. Between expresses the relationship of one thing to another thing or to many other things: Posey spent all day carrying messages between Chester and the other students. The idea that between can be used only when talking about two things is a myth—it’s perfectly correct to use between if you are talking about multiple binary relationships.

Assure/Ensure/Insure Assure means to tell someone that something will definitely happen or is definitely true: Posey assured Chester that no one would cheat at Bingo. Ensure means to guarantee or make sure of something: Posey took steps to ensure that no one cheated at Bingo. Insure means to take out an insurance policy: Posey was glad the Bingo hall was insured against damage caused by rowdy Bingo players.

Breath/Breathe Breath is a noun; it’s the air that goes in and out of your lungs: Chester held his breath while Posey skateboarded down the stairs. Breathe is a verb; it means to exhale or inhale: After Posey’s spectacular landing, Chester had to remind himself to breathe again.

Capital/Capitol Capital has several meanings. It can refer to an uppercase letter, money, or a city where a seat of government is located: Chester visited Brasίlia, the capital of Brazil. Capitol means the building where a legislature meets: Posey visited the cafe in the basement of the capitol after watching a bill become a law.

Complement/Compliment A complement is something that completes something else. It’s often used to describe things that go well together: Chester’s lime green boots were a perfect complement to his jacket. A compliment is a nice thing to say: Posey received many compliments on her purple fedora.

E.g./I.e. These two Latin abbreviations are often mixed up, but e.g. means “for example,” while i.e. means “that is.”

Empathy/Sympathy Empathy is the ability to understand another person’s perspective or feelings. Sympathy is a feeling of sorrow for someone else’s suffering. A sympathizer is someone who agrees with a particular ideal or cause.

Flaunt/Flout Flaunt means to show off: Chester flaunted his stylish new outfit. Flout means to defy, especially in a way that shows scorn: Posey flouted the business-casual dress code by wearing a tiara and flip-flops.

Gaff/Gaffe A gaff is a type of spear or hook with a long handle: Chester completed his sailor costume with a gaff borrowed from his uncle’s fishing boat. A gaffe is a faux pas or social misstep: Posey made a gaffe when she accidentally called Chester by the wrong name.

Imply/Infer Imply means to hint at something without saying it directly: Chester implied that Posey was in trouble, but he wouldn’t tell her why. Infer means to deduce something that hasn’t been stated directly: Posey inferred that Chester was nervous about something from the way he kept looking over his shoulder.

It’s/Its It’s is a contraction of “it is”: Posey needs to pack for her trip because it’s only two days away. Its is a possessive pronoun that means “belonging to it”: Chester is obsessed with both the book and its author.

Lead/Led Lead, when it rhymes with “bed,” refers to a type of metal: Posey wore a lead apron while the dentist X-rayed her teeth. Led is the past tense of the verb to lead, which means to guide or to be first: Chester led the way.

Loose/Lose Loose is usually an adjective: Posey discovered that the cows were loose. Lose is always a verb. It means to misplace something or to be unvictorious in a game or contest: Chester was careful not to lose his ticket.

Principal/Principle Principal can be a noun or adjective. As a noun, it refers to the person in charge of a school or organization: Posey was called into the principal’s office. As an adjective, it means most important: The principal reason for this meeting is to brainstorm ideas for the theme of Chester’s birthday party. A principle (always a noun) is a firmly held belief or ideal: Posey doesn’t like surprise parties as a matter of principle.

Stationary/Stationery Stationary means unmoving: The revolving door remained stationary because Posey was pushing on it the wrong way. Stationery refers to letter writing materials and especially to high quality paper: Chester printed his résumé on his best stationery.

Than/Then Than is used for comparisons: Posey runs faster than Chester. Then is used to indicate time or sequence: Posey took off running, and then Chester came along and finished her breakfast.

Their/There/They’re Their is the possessive form of “they”: Chester and Posey took their time. There indicates a place: It took them an hour to get there. They’re is a contraction of “they are”: Are Chester and Posey coming? They’re almost here.

To/Too To is a preposition that can indicate direction: Posey walked to school. She said hello to Chester when she saw him. To is also used in the infinitive form of verbs: Chester waited until the last minute to do his homework. Too is used as an intensifier, and also means “also”: Posey waited too long to do her homework, too.

Who’s/Whose Who’s is a contraction of “who is”: Who’s calling Chester at this hour? Whose is a possessive pronoun that means “belonging to [someone]”: Chester, whose phone hadn’t stopped ringing all morning, barely ate anything for breakfast.