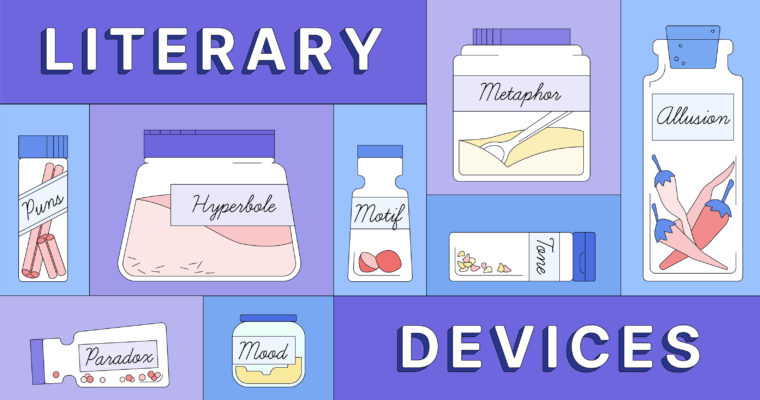 Whether you’re improving your writing skills or studying for a big English exam, literary devices are important to know. But there are dozens of them, in addition to literary elements and techniques, and things can get more confusing than a simile embedded within a metaphor!

To help you become a pro at identifying literary devices, we provide this guide to some of the most common ones. We include a one-stop glossary with literary device meanings, along with examples to illustrate how they’re used.

What are literary devices?

“Literary device” is a broad term for all the techniques, styles, and strategies an author uses to enhance their writing. With millennia of literature in hundreds of different languages, humankind has amassed quite a few of these writing devices, which continue to evolve.

Literary devices can entail general elements that come back again and again in a work of literature, as well as the specific and precise treatment of words only used once. Really, a literary device is anything that can take boring or flavorless writing and turn it into rich, engaging prose!

>>Read More: What Type of Writer Are You?

Literary elements are “big-picture” literary devices that extend throughout the entire work, such as setting, theme, mood, and allegory.

Literary techniques are the literary devices that deal with individual words and sentences, such as euphemisms and alliteration.

How to identify literary devices when you’re reading

You don’t necessarily need to understand literary devices to enjoy a good book. Certain devices like personification, onomatopoeia, and anthropomorphism are still entertaining to read, even if you don’t know them by their proper name.

To identify literary devices when reading, it’s best to familiarize yourself with as many as you can. Your first step is to know what to look for, and from there it just takes practice by reading different works and styles. With some experience, you’ll start to spot literary devices instinctively without disrupting your enjoyment or focus while reading.

How to use literary devices in your writing

To use literary devices in your own writing, you first need to recognize them “in the wild.” Read the list below so you know what you’re looking for, and then pay extra attention when you’re reading. See how literary devices are used in the hands of expert writers.

Oftentimes, novice writers will shoehorn literary devices into their writing to make them seem like better authors. The truth is, misusing literary devices stands out more than using them correctly. Wait for a moment when a literary device can occur organically instead of forcing them where they don’t belong.

>>Read More: Creative Writing 101: Everything You Need to Get Started

28 different literary devices and their meanings

Allegories are narratives that represent something else entirely, like a historical event or significant ideology, to illustrate a deeper meaning. Sometimes the stories are entirely fabricated and only loosely tied to their source, but sometimes the individual characters act as fictional stand-ins for real-life historical figures.

Alliteration is the literary technique of using a sequence of words that begin with the same letter or sound for a poetic or whimsical effect.

An allusion is an indirect reference to another figure, event, place, or work of art that exists outside the story. Allusions are made to famous subjects so that they don’t need explanation—the reader should already understand the reference.

Example: The title of Haruki Murakami’s novel 1Q84 is itself an allusion to George Orwell’s novel 1984. The Japanese word for the number nine is pronounced the same as the English letter Q.

Amplification is the technique of embellishing a simple sentence with more details to increase its significance.

Example: “A person who has good thoughts cannot ever be ugly. You can have a wonky nose and a crooked mouth and a double chin and stick-out teeth, but if you have good thoughts it will shine out of your face like sunbeams and you will always look lovely.” —Roald Dahl, The Twits

Example: In Silence of the Lambs, the antagonist Hannibal Lector tried to trick the FBI by naming the suspect Louis Friend, which the protagonist realized was an anagram for “iron sulfide,” the technical term for fool’s gold.

An analogy compares one thing to something else to help explain a similarity that might not be easy to see.

Example: In The Dragons of Eden, Carl Sagan compares the universe’s entire history with a single Earth year to better demonstrate the context of when major events occurred; i.e., the Earth formed on September 9, humans first appeared at 10:30 p.m. on December 31.

Anthropomorphism is when non-human things like animals or objects act human, exhibiting traits such as speech, thoughts, complex emotions, and sometimes even wearing clothes and standing upright.

Example: While most fairy tales feature animals that act like humans, the Beauty and the Beast films anthropomorphize household objects: talking clocks, singing teapots, and more.

Antithesis places two contrasting and polarized sentiments next to each other in order to accent both.

Example: “One small step for man, one giant leap for mankind.” —Neil Armstrong

The literary technique of chiasmus takes two parallel clauses and inverts the word order of one to create a greater meaning.

Colloquialism is using casual and informal speech, including slang, in formal writing to make dialogue seem more realistic and authentic. It often incorporates respelling words and adding apostrophes to communicate the pronunciation.

Circumlocution is when the writer deliberately uses excessive words and overcomplicated sentence structures to intentionally convolute their meaning. In other words, it means to write lengthily and confusingly on purpose.

Example: In Shrek the Third, Pinocchio uses circumlocution to avoid giving an honest answer to the Prince’s question.

An epigraph is an independent, pre-existing quotation that introduces a piece of work, typically with some thematic or symbolic relevance.

Example: “He who makes a beast of himself gets rid of the pain of being a man,” a quote by Samuel Johnson, is the epigraph that opens Hunter S. Thompson’s Fear and Loathing in Las Vegas, a novel that deals largely with substance abuse and escapism.

A euphemism is a soft and inoffensive word or phrase that replaces a harsh, unpleasant, or hurtful one for the sake of sympathy or civility.

Example: Euphemisms like “passed away” and “downsizing” are quite common in everyday speech, but a good example in literature comes from Harry Potter, where the wizarding community refers to the villain Voldemort as “He-Who-Must-Not-Be-Named” in fear of invoking him.

Foreshadowing is the technique of hinting at future events in a story using subtle parallels, usually to generate more suspense or engage the reader’s curiosity.

Example: In The Empire Strikes Back, Luke Skywalker’s vision of himself wearing Darth Vader’s mask foreshadows the later revelation that Vader is in fact Luke’s father.

Hyperbole is using exaggeration to add more power to what you’re saying, often to an unrealistic or unlikely degree.

Example: “I had to wait in the station for ten days—an eternity.” —Joseph Conrad, Heart of Darkness

Imagery refers to writing that invokes the reader’s senses with descriptive word choice to create a more vivid and realistic recreation of the scene in their mind.

Example: “The barn was very large. It was very old. It smelled of hay and it smelled of manure. It smelled of the perspiration of tired horses and the wonderful sweet breath of patient cows. It often had a sort of peaceful smell­ as though nothing bad could happen ever again in the world.” —E. B. White, Charlotte’s Web

Similar to an analogy, a metaphor is a figure of speech that compares two different things to show their similarities by insisting that they’re the same.

“All the world’s a stage,

And all the men and women merely players;

They have their exits and their entrances,

A story’s mood is the emotional response the author is targeting. A writer sets the mood not just with the plot and characters, but also with tone and the aspects they choose to describe.

A motif is a recurring element in a story that holds some symbolic or conceptual meaning. It’s closely related to theme, but motifs are specific objects or events, while themes are abstract ideas.

Example: In Shakespeare’s Macbeth, Lady Macbeth’s obsession with washing her hands is a motif that symbolizes her guilt.

Fancy literary term onomatopoeia refers to words that represent sounds, with pronunciations similar to those sounds.

Example: The word “buzz” as in “a buzzing bee” is actually pronounced like the noise a bee makes.

An oxymoron combines two contradictory words to give them a deeper and more poetic meaning.

Similar to an oxymoron, a paradox combines two contradictory ideas in a way that, although illogical, still seems to make sense.

Example: “I know only one thing, and that is I know nothing.” —Socrates in Plato’s Apology

Personification is when an author attributes human characteristics metaphorically to nonhuman things like the weather or inanimate objects. Personification is strictly figurative, whereas anthropomorphism posits that those things really do act like humans.

Example: “The heart wants what it wants—or else it does not care . . .” —Emily Dickinson

Portmanteau is the literary device of joining two words together to form a new word with a hybrid meaning.

Puns are a type of comedic wordplay that involve homophones (different words that are pronounced the same) or two separate meanings of the same word.

Satire is a style of writing that uses parody and exaggeration to criticize the faults of society or human nature.

Example: The works of Jonathan Swift (Gulliver’s Travels) and Mark Twain (The Adventures of Huckleberry Finn) are well known for being satirical. A more modern example is the TV show South Park, which often satirizes society by addressing current events.

Like metaphors, similes also compare two different things to point out their similarities. However, the difference between similes and metaphors is that similes use the words “like” or “as” to soften the connection and explicitly show it’s just a comparison.

Example: “Time has not stood still. It has washed over me, washed me away, as if I’m nothing more than a woman of sand, left by a careless child too near the water.” —Margaret Atwood, The Handmaid’s Tale

Closely related to motifs, symbolism is when objects, characters, actions, or other recurring elements in a story take on another, more profound meaning and/or represent an abstract concept.

Example: In J. R. R. Tolkien’s Lord of the Rings trilogy (and The Hobbit), it is said the ring of Sauron symbolizes evil, corruption, and greed, which everyday people, symbolized by Frodo, must strive to resist.

Example: Told in the first person, J. D. Salinger’s Catcher in the Rye uses the angsty and sardonic tone of its teenage protagonist to depict the character’s mindset, including slang and curse words.