What Is a Participle? Definition and Examples 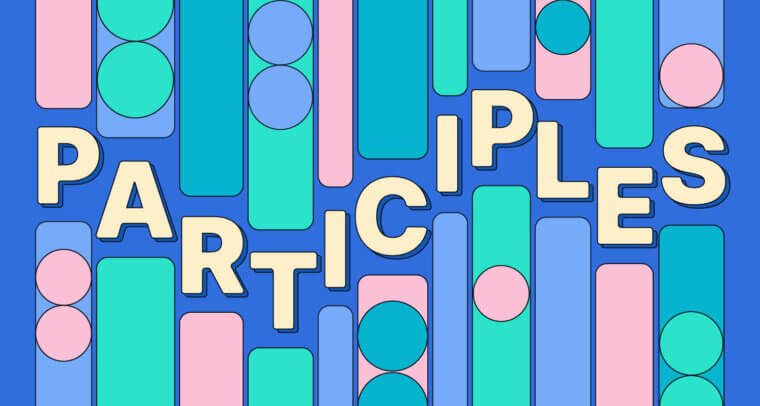 A participle is a form of a verb used as either an adjective (“the hidden treasure”) or a part of certain tenses (“we are hiding the treasure”). Participles have two different types, the present participle and past participle, and participles used as adjectives can form a longer participle phrase (“Hidden in the bushes, the treasure was hard to see”).

Participles are common in English, but that doesn’t mean they’re easy to understand. In this guide, we explain the different types of participles, how to use them properly, and how to avoid the infamous dangling participle, a common grammatical mistake.

What is a participle?

Participles are a particular form of verb that has two main purposes:

1 Turn the verb into an adjective to modify nouns.

2 Connect with auxiliary verbs to create different tenses, such as the present perfect tense.

Here’s an example of participles used as adjectives: Let’s say you’re at a zoo looking at otters. One otter is eating, and another is swimming. You could distinguish them by saying, “Look at the eating otter” or “Look at the swimming otter.” In these examples, the verbs eat and swim are not acting as verbs; they’re acting as adjectives because they modify the noun otter.

Be careful not to confuse participles with infinitives, another form of verb that can modify nouns. Infinitives usually have the word to at the beginning, whereas participles do not.

[infinitive] a drink to refresh

The second purpose of participles is to create different verb tenses, specifically the perfect tenses and continuous tenses. For example, if you are doing something now or in the near future, you use the present continuous tense, which is formed with the verb be and a present participle, or -ing form, of the verb.

I am eating lunch right now.

Let’s look at each type individually.

What is a present participle?

The present participle is used in the continuous tenses or as an adjective describing an action that is currently taking place.

The bird is singing outside my window.

The singing bird is outside my window.

For most verbs, you form the present participle by adding –ing to the end.

For verbs ending in –c, just add a -k before –ing.

For verbs ending in -ie, change the –ie into a –y before adding –ing.

For verbs ending in a silent -e, simply drop the -e and then add –ing.

Please note that this does not include words ending in a double –e. Verbs that end in –ee follow the standard rules.

For verbs ending in one vowel and one consonant, double the consonant before adding –ing.

There are exceptions to this rule, however. If a word ending in a single vowel and a single consonant has two syllables but the second syllable is not stressed, you can add –ing without changing anything.

(In UK English, if a word ends in a single vowel and an l, like cancel, you double the l before –ing, as in cancelling. In American English, you would use canceling because the second syllable is not stressed.)

How to use the present participle in the continuous tenses

[present form of be] + [present participle]

She is going to the game tonight.

[past form of be] + [present participle]

I was sleeping when my cat jumped on my head.

They will be running for mayor in the next election.

How to use the present participle in the perfect continuous tenses

I couldn’t see the film because I have been working late all week.

The plane had been flying normally before lightning struck the wing.

In September, we will have been dating for two years.

What is a past participle?

The past participle is used in the perfect tenses or as an adjective describing an action that has already been completed. It’s also a key component in using the passive voice, which we explain further down.

I have completed my paper already.

I turned in my completed paper.

For regular verbs, the past participle is the same as the simple past tense. That means you simply add –ed to the end.

Just like with the present participle, there are special rules for verbs that end in -c, -e, or a consonant and –y, as well as for words ending in one vowel and one consonant.

For verbs ending in -c, you first add a –k before –ed.

For verbs ending in a consonant and –y, replace the –y with an –i before adding –ed.

For verbs ending in one vowel and one consonant, double the consonant before adding –ed.

Just like with present participles, if a word ending in a single vowel and single consonant has two syllables but the second syllable is not stressed, you add –ed without changing anything.

Feel free to review our complete list of irregular verbs, which includes their correct past participles.

How to use the past participle in the perfect tenses

They have practiced for this moment their whole life.

By the time the cops arrived, the thief had left.

I will have gone home already when the pizza comes.

How to use the past participle in the passive voice

In the debate of active vs. passive voice, we recommend using the active voice whenever possible. However, in certain circumstances the passive voice is unavoidable. In these cases, use the conjugated form of the verb be together with the past participle.

[conjugated form of be] + [past participle]

I am known for my anonymity.

The gunslinger was followed through the desert.

What is a participial phrase?

We tried to avoid the person wearing a clown costume.

The other words in a participial phrase relate to how the action in the participle is performed. In the example above, wearing is the participle and a clown costume explains what was being worn, but the entire phrase works together to describe the person.

Likewise, participial phrases can involve prepositional phrases that describe the participle’s action, such as when or where it is performed.

Walking on the beach, we saw the clown again.

The scary clown saw us walking on the beach.

Always place a participial phrase directly next to the noun it’s modifying, or else you risk creating a grammatical mistake known as the dangling participle, explained below.

What are perfect participles?

Perfect participles are a type of participial phrase that starts with having because they use the perfect tense. They are quite useful in communicating the order in which things happen, such as showing an event or situation that existed before a second event or situation.

Having visited Rome before, I became the unofficial tour guide.

If you get confused, try breaking the sentence into two new sentences.

I have visited Rome before. I became the unofficial tour guide.

What is a dangling participle?

Driving down the highway, my dog stuck her head out the window.

In this example of a dangling participle, the participial phrase driving down the highway relates to the noun next to it, in this case the noun phrase my dog. That means this sentence is correct only if the dog was actually driving!

When starting a sentence with a participial phrase, always be careful about what noun comes after it. You may need to reword your sentence to make it correct.

While I was driving down the highway, my dog stuck her head out the window.

What is a participle?

A participle is the form of a verb that’s used as either an adjective or a part of another verb tense like the perfect or continuous tenses.

What are the different kinds of participles?

What are participial phrases?