Figurative Language Examples: How to Use These 5 Common Types 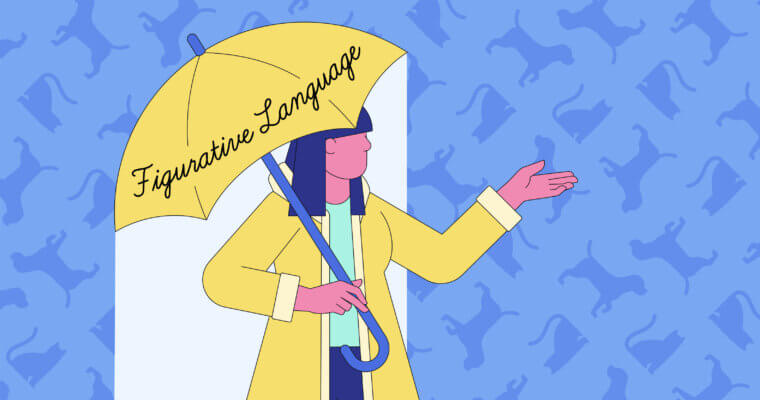 Have you ever heard someone talk about “butterflies in their stomach” when they’re nervous? There aren’t actually butterflies inside of their stomach—that would be cruel! They’re just using figurative language to describe the uneasy sensation in their body that feels as if a butterfly were moving around inside them.

Figurative language can be difficult (like moving a mountain!), so below we have a quick guide on what it is, why it’s useful, and how to use it yourself. There are many types of figurative language—we explain five of the most common types, along with examples.

What is figurative language?

Basically, figurative language is anytime you stretch the actual meaning of words for effect, whether to sound artistic, make a joke, or communicate more clearly and engagingly. Figurative language is a common technique in narrative writing, where the author strives to make emotional connections with the reader.

The opposite of figurative language is literal language, or phrasing that uses the exact meaning of the words without imagination or exaggeration. For example, if an athlete is doing well, you might say they’re “on fire” figuratively. If their clothes catch on fire (which hopefully doesn’t happen), then they’d be on fire literally.

What is the purpose of figurative language?

Literal language serves its purpose in certain contexts, such as professional communication, academic papers, or legal documents. However, in other contexts, to put it bluntly, literal writing could be boring.

On the contrary, figurative language helps make writing and speeches more engaging and amusing. The reader or listener has to think about the words a little more, as if deciphering a riddle, which means they’re actively participating.

Another use of figurative language is to help simplify complex ideas. Scientists might use it to explain the more complicated aspects of their research that a general audience might not understand.

For example, Schrödinger’s cat is a popular thought experiment to explain paradoxes in quantum mechanics; without using figurative language, you’d have to learn all about subatomic physics, quantum superposition, and tons of other hard-to-understand concepts. For people without years of scientific training, the metaphor makes it easier to learn.

A simile compares two different things, using the words “like” or “as” to draw attention to the comparison.

“The very mystery of him excited her curiosity like a door that had neither lock nor key.” —Margaret Mitchell, Gone with the Wind

“He swung a great scimitar, before which Spaniards went down like wheat to the reaper’s sickle.” —Raphael Sabatini, The Sea Hawk

A metaphor compares two different things, similar to a simile. The main difference between a simile and a metaphor is that metaphors do not use the words “like” or “as.”

Unlike similes, metaphors don’t acknowledge that they’re comparisons. A literal-minded reader might mistake them for reality, which makes them more figurative and poetic.

“The sun was a toddler insistently refusing to go to bed: It was past eight thirty and still light.” —John Green, The Fault in Our Stars

“All religions, arts and sciences are branches of the same tree.” —Albert Einstein, Out of My Later Years

Personification is giving human characteristics to nonhuman or abstract things. This could be physical attributes (“the eye of the needle”), emotional attributes (“a single lonely shoe”), or human actions (“a leaf dancing in the wind”).

“Because I could not stop for Death –

He kindly stopped for me –

The Carriage held but just Ourselves –

—Emily Dickinson, “Because I could not stop for Death”

“Life moves pretty fast. If you don’t stop and look around once in a while, you could miss it.” —John Hughes, Ferris Bueller’s Day Off

“There was no hurry, for there was nowhere to go, nothing to buy and no money to buy it with, nothing to see outside the boundaries of Maycomb County.” —Harper Lee, To Kill a Mockingbird

“I heard all things in the heaven and in the Earth. I heard many things in Hell. How then, am I mad?” —Edgar Allan Poe, The Tell-Tale Heart

An allusion is a reference to a preexisting person, work, event, or well-known piece of pop culture. Allusions generally relate to common knowledge, so no explanation is necessary.

“The camera has its own kind of consciousness; in the lens the Garden of Eden itself would become ever so slightly too perfect.” —Arthur Miller, Timebends: A Life

How to use figurative language in your own writing

With figurative language, a little goes a long way. Think of it like cooking with salt: Using a little bit can enhance the taste and add wonderful new flavors, but overdoing it can ruin your meal.

Figurative language can be distracting, so it’s best to limit its usage. If you’re using metaphors, hyperbole, or other literary devices in every sentence, you’re going to exhaust your reader. Save them for only the key moments in your story.

Aside from creating more engaging writing and helping to explain complex ideas, figurative language is also great for a laugh. Comedians and comedic writers often use it for punchlines and humorous analogies.

Hyperbole, especially an understatement, is particularly useful for cracking jokes. Think of Monty Python’s Black Knight referring to losing a limb as “but a scratch.”

Be careful when using figurative language as dialogue

Often in creative writing, it’s tempting to write figurative language as part of a character’s dialogue. While figurative language is quite common in everyday speech (i.e., “I could just die from embarrassment,” or “I’m starving!”), flowery phrases tend to stick out in conversations, and not always in a good way.

Even if a writer is particularly proud of a certain turn of phrase, putting those words in the mouth of a character can seem out of place or inauthentic. Excessive figurative language in dialogue can ruin the reader’s immersion and remind them that they’re actually reading a story. The exception is if talking extravagantly is a particular trait of your character, such as the purposefully pretentious Humbert Humbert from Vladimir Nabokov’s Lolita.

Think about how people talk in real life and use that as a guideline. If you come up with a brilliant figurative phrase that must be used, work it into the narration instead.

Sometimes figurative language can simplify a complicated idea, but other times it can complicate a simple idea. If you want to add some figurative spice to a sentence, make sure that you don’t convolute the meaning.

Remember that figurative language can be distracting, so sometimes it makes it harder for the reader to understand what you’re trying to say. Never sacrifice clarity for something that sounds nice—save figurative language for the times when you can have both.