How To Write a Joke 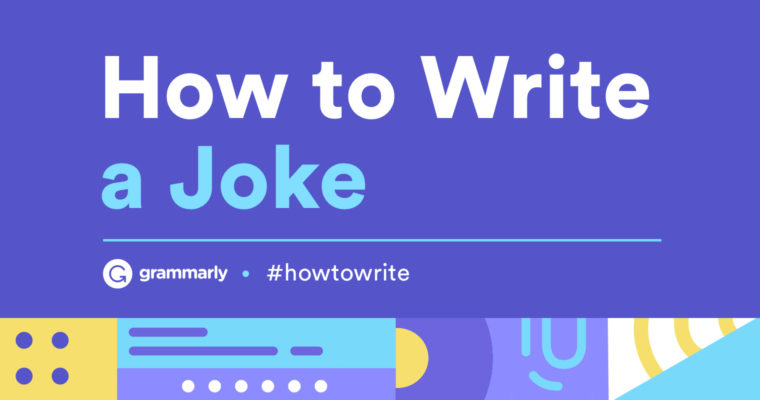 It’s said that laughter is the best medicine, but that’s false. Sure, laughter reduces stress and boosts your immune response—at least according to many fine articles available in such prestigious venues as your dentist’s waiting room—but alas, usually medicine is the best medicine.

That said, even if you never aspire to craft a joke for delivery into a microphone, being able to get one down in writing is handy.

So much of what people read each day feels like it was written by either a robot or an angry person still haunted by (and forever reenacting) the horrors of middle-school dodgeball. A well-written joke might just signal to its recipient that you are, in fact, a fellow alive person, not a bot, and trust that they, too, have proudly surmounted the bygone trauma of gym class. A few guidelines follow.

What even is a joke?

It’s hard to overstate how complex and paradoxically unfunny some of the answers to this question really are. The Wikipedia entry for the word “joke” features sections on psychology, linguistics, and folklore, and includes well over a hundred footnotes, which are somehow separate from the multiple-scrolls-deep bibliography. We started to write something about Aristotle’s Poetics here but cut it because reasons.

In its classic sense, a joke has a setup and a punchline. Take this example from Demetri Martin: “I bought a cactus. A week later it died. And I got depressed…” Setup into punchline: “…because I thought, Damn. I am less nurturing than a desert.”

There are conflicting theories as to why that’s funny, and they get pretty wonky. One is essentially that we laugh to relieve tension. Another—and this one is a real laugh riot—is that we’re laughing at others’ misfortune and our own sense of superiority. Heyo! But rather than unpack the scintillating Semantic Mechanisms of Humor, let’s focus on the process of actually, you know, writing jokes.

What’s that saying about brevity?

Now, a caveat: above we used the word guidelines, not rules, because comedy is about tweaking expectations, and the ways of doing that are multifarious—which is a real word.

As a result, while it’s usually best to keep your jokes tight, we’d be remiss to ignore the occasional comedic gold of a prolonged windup that goes nowhere. (My mom has been quietly perfecting this style for decades, and I only recently came to appreciate what an understated genius she is.)

Streamlining your material matters because, unless you have a masterful command of language, it’s hard to keep people interested while your joke takes forever to unspool. This is especially true if you’re sneaking jokes into otherwise serious business like work emails, a blog post about the formation of the solar system, or a reported essay on a local transit project.

And those last items are not random examples; your humble author has worked jokes into both—mostly at the expense of seeming like a normal person. Which brings us to…

The best person to make fun of is often yourself.

This is not to say there’s no place for dark or edgy comedy or political subtext. But it is to say that when the person writing the joke is punching down at their subject, it’s not an endearing look. (Yes, I made fun of my mom a couple of paragraphs ago. But then I called her a genius. Love you, Mom.) Still, consider this from Keegan-Michael Key:

Comedy and drama pretty-much always have to be about people behaving badly.

“If you write an uplifting scene, it’s not funny,” Key argues. But he’s talking about inventing characters from scratch for the show Key & Peele. Sometimes, the only character you have available is yourself—and making yourself the butt of a joke is often worth it.

As Amy Poehler famously said, “Vanity is the death of comedy.”

As with so many other forms of writing, jokes rarely come out perfectly on the first try. Professional joke-smiths are constantly hacking away extraneous details and searching for snappier, funnier punchlines. They also work one million hours every week, if they’re anything like SNL alum Maya Rudolph:

Sometimes, on writing nights, Rudolph would put her toddler to bed, head to work until “between 6 and 9 in the morning” and come home just as she awoke.

Another paradox of comedy: sometimes, it requires serious effort.