Simile vs. Metaphor: What’s the Difference? 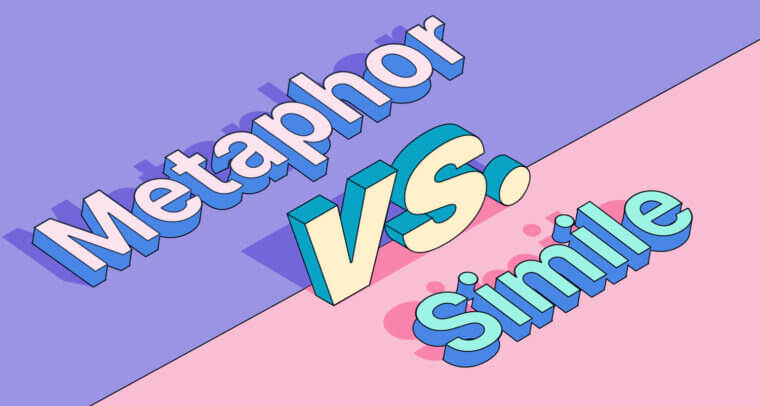 Have you ever heard someone use the word “literally” and thought, “They can’t really mean literally.” There were not literally a million people at the concert. That final exam did not literally kill them.

What they mean to say is that the concert was so crowded it felt like there were a million people packed together, or that the test was so difficult it drained their mental energy. These are perfect instances to use simile and metaphor, figures of speech that compare one thing to another.

A simile makes a comparison using the words “like” or “as.”

Example: The concert was so crowded, it felt like a million people were there.

A metaphor makes the comparison directly, substituting one thing for another.

Example: That test was a killer.

A simile is a type of metaphor, meaning all similes are metaphors, however, not all metaphors are similes. Below we’ll break down the differences between them and explain when to use one or the other.

A simile (pronounced SIM-i-lee) is figurative language that compares two things using the words “like” or “as.” It is also known as an indirect comparison.

As a writer, similes give you the power to create vivid imagery and descriptions for your reader.

as thin as a rail.

as American as apple pie.

Then you’re writing in similes. The person you’re writing about does not literally have the same width as a rail. The comparison between the character and a rail creates a better image for your reader than saying, “She’s skinny.”

How are similes structured?

Similes have a simple structure: X is like Y. The comparison uses “like,” “as,” or another connector. And that’s pretty much it.

However, it’s important to note that just because a phrase has the word “like” or “as” doesn’t automatically make it a simile. A simile is a literary device, which means it’s used in descriptive writing.

When to avoid similes

Similes are a great way to enhance your writing’s imagery, but use them too often and your reader may become confused or even bored.

Imagine reading a passage where three characters are described as “brave as a lion, busy as a bee, and cold as ice.” All three similes are descriptive on their own, but when packed together, they lose their power. Similes are like accessories—they can enhance an outfit, or they can overwhelm it.

A metaphor is a direct comparison between two things. Metaphors don’t suggest one thing is like another; they declare that one thing is another: Love is a battlefield. He is the black sheep of the family. You are my lucky star.

Metaphors are abundant in our language, and often you won’t even know you’re using them.

If someone asks, “Do I make myself clear?”

And you answer, “Crystal.”

You’ve replied using a metaphor. Their request has the same clarity as a transparent crystal.

How are metaphors structured?

The structure of a metaphor is based on four elements:

Vehicle: The word that conveys the meaning of the metaphor. In the above example, “Your answer is crystal clear,” the vehicle is “crystal.”

Metaphor is a broader category of figurative language than simile. Unlike similes, with their straightforward setup, metaphors can appear in many forms. A metaphor can be standard, implied, sustained, dead, or mixed.

A standard metaphor succinctly states one thing is another.

Example: You are my sunshine.

An implied metaphor creates an extra level of depth by creating a comparison that relies on prior knowledge.

Example: You bring warmth and light into my life.

The “you” in this sentence is being compared to the sun, a source of warmth and light, without it being directly mentioned.

A sustained metaphor carries on through multiple sentences, paragraphs, or even an entire work. These are also called extended metaphors.

A dead metaphor is a metaphor that has been used so frequently that it no longer has literary power.

Examples: The hands of the clock; the foot of the bed; the last leg of the trip.

All these phrases contain metaphors—a clock does not have anatomical hands any more than a bed has an anatomical foot. These are such common phrases, however, that we barely think of them as metaphors.

A mixed metaphor occurs when you layer two different metaphors on one another. Usually this happens by accident, especially if you’re using dead metaphors.

This example is a bit facetious. It’s clear the writer purposely mixed those metaphors for comedic effect. But the point made is clear: The phrases “early bird catches the worm” and “a rolling stone gathers no moss” make sense on their own, but they create ridiculous, nonsensical statements when combined.

What are the similarities between simile and metaphor?

What are the differences between simile and metaphor?

When you start to create more complex or elongated comparisons, it’s worth thinking through the differences between simile and metaphor. Two things to consider when deciding which one to use are strength and scale.

Strength: Because a metaphor is more direct (one thing is another thing), it’s a slightly stronger comparison. You should use metaphors to emphasize the comparison between the two things. A simile, on the other hand, is more like a suggestion. It plants the image in the reader’s head, but then the writing continues. Similes are better for descriptions you don’t want a reader to dwell on for too long.

Scale: Metaphors and similes also work on different scales. Similes are restricted to the sentence level, whereas metaphors can stretch to include an entire work. For example, there are dozens of theories about what the movie The Matrix is a metaphor for. You aren’t likely to hear that a complete work is a simile for something else. That would require a lot of “likes.”

One of the most famous examples of a simile in pop culture is from the movie Forrest Gump. Forrest, sitting on a park bench and eating a box of chocolates, tells a stranger:

“My momma always said, ‘Life was like a box of chocolates. You never know what you’re gonna get.’”

Did you spot the simile? In an earlier scene, Forrest’s mother tells him:

“Life is a box of chocolates, Forrest. You never know what you’re gonna get.”

Did you spot the metaphor? The “box of chocolates” phrase has a simile version and a metaphor version. Funnily enough, neither version is “Life is like a box of chocolates,” the quote that most people remember from the movie.

Below are more examples of similes and metaphors in literature.

Examples of simile in literature

“The café was like a battleship stripped for action.”

“Time has not stood still. It has washed over me, washed me away, as if I’m nothing more than a woman of sand, left by a careless child too near the water.” —

The Handmaid’s Tale by Margaret Atwood

“I wandered lonely as a cloud that floats on high o’er vales and hills.” —“Daffodils”

Examples of metaphor in literature

“All the world’s a stage,

And all the men and women merely players.” —As You Like It by William Shakespeare

Life for me ain’t been no crystal stair. It’s had tacks in it, And splinters, And boards torn up, And places with no carpet on the floor— Bare.” —“Mother to Son” by Langston Hughes (The entire poem is a sustained metaphor.)

“Behind him, sitting on piles of scrap and rubble, was the blue kite. My key to Baba’s heart.”

—The Kite Runner by Khaled Hosseini

A simile is a comparison between two things using the word “like” or “as” to connect them. Example: He smothers our enthusiasm like a wet blanket.

A metaphor is a comparison between two things that declares one thing is another. Example: He’s a wet blanket.

What are the key similarities between similes and metaphors?

Both similes and metaphors use comparisons between unlike things to create vivid imagery and more complex descriptions for the reader.

How do similes and metaphors differ?