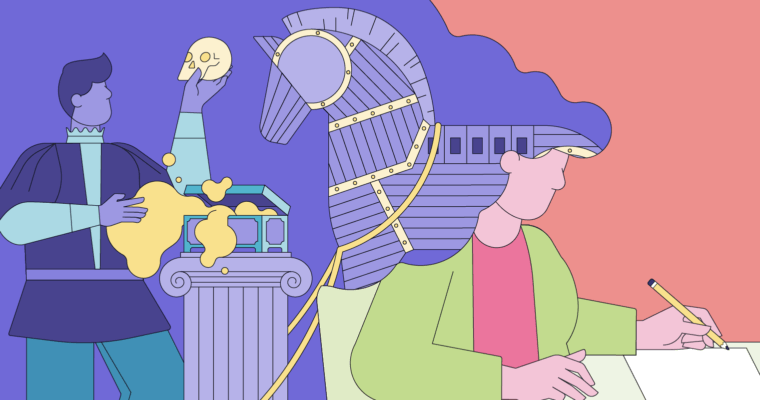 Have you ever stumbled across an online mystery, perhaps through social media or a forum, and found yourself spending the next several hours going “down the rabbit hole”?

You might have described the experience with those exact words or with something similar, like “that’s a rabbit hole I didn’t want to go down” or “I got sucked down that rabbit hole.”

Nobody thinks you literally invaded a rabbit’s burrow. The concept of “going down the rabbit hole” is an allusion to Lewis Carroll’s Alice’s Adventures in Wonderland. It’s shorthand for spending more time than you intended exploring an intriguing, strange concept. Even if you aren’t familiar with Alice’s Adventures in Wonderland, you probably know what it means to go down the rabbit hole. That’s because this is an extremely popular allusion that you’ve seen in countless movies, television shows, comics, art, and other media.

Allusion is a reference to a well-known person, character, place, or event that a writer makes to deepen the reader’s understanding of their work. Allusions aren’t reserved for writing, though—we frequently use them in our speech.

An allusion is a concise way to communicate a lot of meaning. Think of it like a writing shortcut. You could spend a paragraph or two describing why a proposed business venture is doomed to fail despite it checking all the boxes for being the best in its market, or you could describe it as “unsinkable” and instantly communicate the same sentiment.

While some allusions explicitly name the thing they’re referencing, others don’t, and this is why it’s important to choose a reference your reader will recognize. Essentially, allusion taps into your readers’ shared frame of reference, which is why an allusion might make sense to one reader demographic, but fall flat with another.

Allusion is just one of the many literary devices at your disposal, and it can be easy to confuse it with other concepts. Here’s a quick rundown of what allusion is not:

Although you’ll find plenty of instances of allusion in fiction, that’s not the only place you’ll find it. You might run into it in a piece of creative nonfiction, an essay, a blog post, a poem, or a play. You’ll also likely run into it in academic writing, but usually in the sources being discussed rather than in the author’s own words.

What is the purpose of allusion in writing?

Allusion can do a lot of things. It can give your readers context for what’s happening in your writing. For example, you might allude to the Bible (one of the most frequently alluded-to works in the Western literary canon) by referring to a hard-partying young adult as their family’s “prodigal son.” By doing this, you communicate to readers that the young adult squandered their family’s resources and has now returned to their parents, seeking support.

Allusion can also be part of characterization. For example, you might describe an irreverent teacher as having frizzy hair and wearing bright, bold clothing. By alluding to Ms. Frizzle from The Magic School Bus, you’re characterizing this teacher as engaging, energetic, and willing to get messy and make mistakes.

You can use allusion as a personification tool, too. Here are a few examples:

Those mice knew the fastest way to destroy my shirt, as if they’d made clothing and knew every seam.

I couldn’t shake the feeling that I’d get found out, even though I worked completely alone—just my laptop and me. But that screen saw right through me and I could hear exactly what it had to say: “Phony!”

You can also use allusion to position yourself as an authority in your field. By using industry-specific allusions in your writing, you communicate to your readers that you know what you’re talking about. Similarly, you can use allusion to make yourself more relatable to your readers, whether they’re colleagues, your peer group, fans of a specific literary genre, or the audience your business is targeting. For example, a footwear brand aiming to tap into millennial nostalgia might use “These shoes rule!” as a tagline.

A casual allusion is a single allusion that doesn’t significantly impact the reader’s understanding of the work.

For example, you might describe a character’s home as “the kind of place where Tim Burton would be right at home.” Readers who are familiar with Burton’s work would visualize the home as having lots of sharp, angular black and white design elements. Readers who aren’t familiar might not picture this, but they could continue reading without losing understanding of the story.

Also known as self-allusion, self-reference is an allusion to one of your own works. Author Wally Lamb does this in a few of his books, which take place in a shared fictional community.

You might work a self-reference into a story by having the protagonist interact with the protagonist of a previous story. You can also reference your own work by using a piece’s words in a new way, like using a past poem’s refrain as the opening line in a new poem.

Corrective allusion is where a writer makes a reference, but for the purpose of opposing the original reference.

While Shakespeare’s Romeo and Juliet is alluded to frequently to communicate ideas about true love and star-crossed lovers, a writer might use a corrective allusion like this:

They were a pair of star-crossed lovers, doomed to stoke chaos and destroy lives.

See how this allusion flips the typical reference to Romeo and Juliet on its head, referencing the destruction that resulted from their pairing?

A single reference is a straightforward allusion where the reader is supposed to recognize the reference and understand its meaning. With a single reference, the allusion does not extend beyond the one instance—in other words, there aren’t follow-up references that could drive the work into allegory territory.

Single references can communicate meaningful ideas, but they can also be one-off moments where you can slip a joke or a wink into your writing. For example, you might allude to Atlas, a figure from Greek mythology, in a persuasive essay about hard-working frontline workers “holding the world on their shoulders.” Or you might tease your mailing list by referencing Pokémon in a promotional email that says “A wild discount appeared!”

An example of an apparent allusion occurs in Toni Morrison’s The Bluest Eye, where she uses a section of a Dick and Jane primer as a way to comment on how and what children are taught about culture through their schoolwork.

When a work contains multiple instances of allusion to various practices or tropes from a singular cultural tradition, it’s known as a conflation or multiple reference. The Scary Movie series is an example of movies that use multiple reference to poke fun at the horror film genre.

How to use allusion in writing

As we mentioned earlier, it’s important to choose references that your readers are likely to recognize. Otherwise, the reference will go right over their heads and they’ll miss the opportunity to understand what you aimed to communicate through your allusion.

Let’s say you’re writing a blog post about tech integration in the restaurant industry. The majority of the people reading your post are likely to be restaurant owners and managers, so you can use an allusion like “86 long waits with this dynamic new booking software.” Anybody who’s worked in a restaurant knows “86” means an item isn’t on the menu anymore, so this allusion is a clever way to communicate the booking software’s value.

A reader who hasn’t worked in a kitchen may not recognize this meaning and might find themselves looking it up or using context clues to piece together its meaning. In either case, they can probably figure it out, but your allusion won’t have the effect allusions are designed to achieve.

Plot out the allusion

If you’re planning on using allusions in your writing, note them in your outline. This way you can maximize their impact by positioning them in places like headers, opening lines, and follow-ups to previous points you’ve made.

Allusion is frequently used to show, rather than tell, key images and parts of a story. After you’ve written your first draft, look for opportunities to make your writing stronger by changing descriptions to allusions. For example, you might describe a character’s wide smile as “a smile like the Cheshire Cat’s” or a secluded headquarters as “the Batcave.”

What is an allusion?

An allusion is a reference to a well-known person, character, place, or event that a writer makes to deepen the reader’s understanding of their work by creating an association between the work and the reference.

When should you use allusion in your writing?

There are lots of reasons to use allusion in your writing. These include:

What are some examples of allusion?

A few famous examples of allusion include:

Allusions that frequently appear in everyday speech include:

What are some synonyms for allusion?

Reference is the most accurate synonym for allusion. Other words that have similar meanings, but slightly different connotations, include:

Make your next writing project a slam dunk

Allusion, oxymorons, and other literary devices make your writing stronger and more engaging. But when your work contains spelling and grammatical mistakes, your well-crafted wordsmithing can get lost. Grammarly can help you make every reference crystal clear by catching any mistakes you miss and suggesting changes you can make to get your grammar, spelling, syntax, and tone just right.