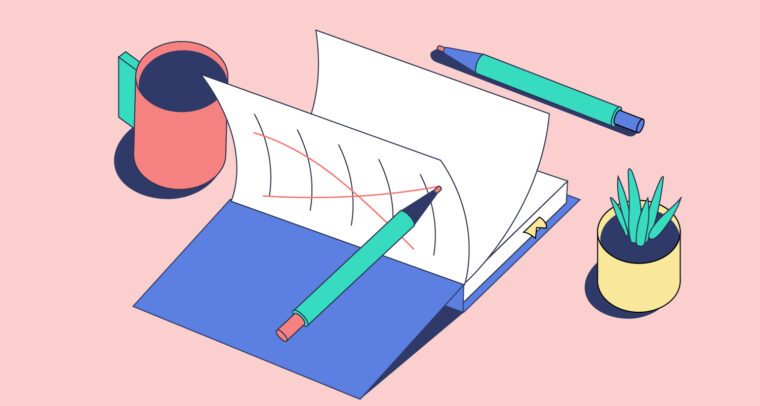 As you develop your writing skills, it’s easy to adopt a few habits along the way. Some of these habits are helpful, like having go-to jargon when composing business emails or using a stream-of-consciousness approach when writing a rough draft quickly.

But not all learned habits are helpful in all contexts. Some can derail your message or leave your reader confused and even frustrated.

To take your writing skills to the next level, read our list of seven common writing habits to stop stat—and advice on what to do instead.

1  Procrastinating (instead, use time blocks)

Procrastinating on your writing might have served you well during undergrad all-nighters, but it’s not sustainable in a professional setting.

A handout by The Writing Center at The University of North Carolina at Chapel Hill delves into all aspects of procrastination, namely how making it a habit can leave you feeling deflated and stressed about the writing process. “Procrastination and perfectionism often go hand in hand,” the handout explains. It also attributes the procrastination to fear.

Let’s say you’re dreading writing an analysis, for example. In worrying about how your leadership team will receive your report, you might avoid working on it until the last minute. But procrastinating means you have less time to fix mistakes—making your initial fears that your writing won’t be up to snuff all the more prophetic.

Instead: Dedicate time in your calendar to think about your writing project and nothing else. Do this long before the deadline. This doesn’t have to be a long block of time—it could be twenty to thirty minutes. Keep these time blocks short. This manageable approach moves your writing forward and allows for self-editing, without the pressure to write perfectly in one sitting.

Adverbs like “really,” and “very” add emphasis. It’s understandable why using them is a common habit. Especially if you sprinkle these adverbs into your everyday conversations, it’s natural for them to pop up in your formal writing, too.

However, overusing “very” and “really” is counterproductive and risks reducing the impact of your statement. Your aim in writing is to communicate clearly; descriptions like “very nice” or “really great” don’t convey that much. It can also lead to confusion: If five points on a memo are “really important,” then they all have the same value and therefore neither is more important than the other.

Instead: Play around with word choice. When you discover too many adverbs in your writing, turn to a thesaurus. Consider the noun’s true significance and choose a word that accurately describes it to keep “very” and “really”  to a minimum. Grammarly can help you by suggesting more concise, powerful language.

3 Relying on turns of phrase (instead, get descriptive)

Familiar language can feel like an easy way to explain or describe a thought. Turns of phrase like “break a leg” or “go the distance” help your reader quickly get an idea of your meaning. But they aren’t useful for keeping a reader’s attention.

Crafting too many run-on sentences is a popular habit. A stream of consciousness might feel natural as you’re writing, but readers generally appreciate the chance to catch a breath (or two).

Not only can a run-on sentence be overwhelming, but it also risks confusing your reader. Lengthy, meandering sentences invite more misunderstandings about the point you’re making.

Instead: Look at your sentences and spot areas that lend a natural pause. Don’t be afraid of punctuation: Use a comma or semicolon, or create a full stop with a period. It may feel choppy to you, but tighter constructions make it easier for readers to absorb your message.

It can feel natural to want to use exclamation points in your writing. They’re nearly ubiquitous in casual writing like texting and social media. And, they’re useful for conveying enthusiasm, importance, or alarm. After all, what better way to express how you feel than an exorbitant number of exclamation points!!?!!?

Instead: Think about the tone or attitude you want to convey. Tone is a combination of word choice, punctuation, and syntax, all of which can effectively do the work of ten exclamation points.

6 Employing too much jargon (instead, write simply)

Some jargon, when clearly explained, can be informational. However, too much jargon forces your audience to reread the text multiple times to understand its meaning. Not only does this lead to readers spending more time making sense of your writing, it results in frustration and bewilderment.

Instead: Keep your writing simple by using plain language and paraphrasing ideas into descriptions that a reader at any level can grasp.

7 Hedging (instead, write with confidence)

Hedging occurs when you insert qualifiers into a statement to avoid coming off too strong. Some examples of hedging include using words and phrases, like “I think,” “it looks like,” “somewhat,” or “this seems to . . .”

In an academic paper, there are practical applications for hedging. But in the workplace and everyday writing, it resonates as too uncertain and cautious. It can even undermine your credibility from the start.

Instead: Keep your business writing strong by removing hedging phrases and words. You can write assertively while maintaining a polite and professional tone without hedging.

Writing Tips6 Ways to Be Less Wasteful in Your Writing

Writing TipsBrainstorming: How to Generate Ideas and Improve Your Writing

Writing TipsTips for Writing a Powerful Rough Draft
Writing, grammar, and communication tips for your inbox.