What to Do When Someone Takes Credit for Your Work 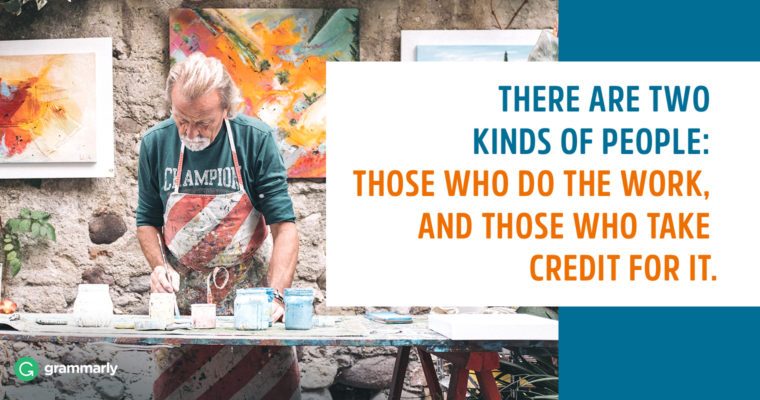 You feel great after finishing a project, but then someone else takes the credit. What should you do? If you lose your cool, you could lose your job. Don’t run the risk! Let’s look at three scenarios and some strategies that can help you turn a bad situation into a favorable one.

You collaborate with a coworker on a project. Later, you overhear your boss commend your colleague: “What a fantastic job! You must have devoted a lot of thought and effort to this task.” You expect your coworker to say they couldn’t have done it without you, but instead he just smiles and says thanks. How will you ever get ahead if your colleague steals your thunder?

Suggestion: First of all, don’t assume that your coworker intentionally deprived you of your due honor. Perhaps he’s nervous around your boss, or he thought that your boss would commend you personally. However, you don’t have to be passive just because your colleague is. Why not give yourself some credit? Approach your boss privately. Ask him for feedback about the task. You might say something like, “I was wondering if you were satisfied with how the project turned out, or if you needed me to make a few tweaks.” When he expresses surprise, modestly explain your role and your investment in the project’s success. And, lest you become a hypocrite, mention an essential contribution of your colleague too.

What if your fellow worker took credit for your work on purpose? Suppose you discovered that she lied to claim your writing as her own. You might be tempted to shout and break things, but that won’t do any good. How can you cope?

Suggestion: For published pieces, alert your colleague to her tendency to “borrow.” You might even use a report from a plagiarism detection program as evidence. If your work hasn’t been published, why not give her a chance to come clean? Not everyone agrees on the definition of plagiarism. She might feel that changing a few words makes the writing her own. However, all is not lost. In an email or in person, tactfully point out that her writing closely resembled the work that you prepared. If she admits her guilt and agrees to rewrite the piece, you can move past the incident in peace.

On the other hand, she might deny it. Consider the case of Kaavya Viswanathan. When this Harvard student faced charges of plagiarism, she claimed it was “unconscious.” Her story fell apart, literally, when her publisher found out that she copied several passages of her novel from different sources. The publisher gave her the boot and immediately pulled the book out of stores. So even if you can’t prove it this time, you can prepare yourself to respond if your coworker tries the same trick again. Take preventive measures by considering how your associate managed to get her hands on your work. Do you need to update your passwords? Lock your desk drawers? Send early drafts of important documents to your boss for review. If Stealy McGrabby tries to take credit for the work later, she will be caught red-handed.

What if the thief isn’t a colleague? What if the thief is your boss? People may steal ideas during brainstorming sessions, when ideas are bouncing all over the place. What happens when he acts as if he came up with the idea by himself?

Suggestion: In these types of situations, you shouldn’t be too offended if the idea-stealer uses your idea. He may not remember who said what, only that he was inspired! Limit the ideas you share at work if you don’t want them to be “company property.” For example, imagine you have a killer idea for an invention. Some businesses specify in the contract that anything you develop during the time you work for them belongs to the company. You might decide to keep your most creative thoughts to yourself until you have the freedom to develop it without anyone else laying claim.

Is there any other way you can deal with the situation without risking your position? In 1999, the Center for Academic Integrity concluded that honor codes that promote “honesty, trust, fairness, respect and responsibility” make a significant difference in the behavior of students. The study further revealed that engagement influences how effective an honor code is. In one test, one group of students read an honor code before taking a test. The second group signed the code attesting that they read and understood it. While the first group was less likely to cheat than students with no honor code, the second group had no instances of cheating at all! What can you do to encourage others to be honest and fair when it comes to taking the credit? Perhaps it’s as simple as making them aware that it’s the right thing to do.