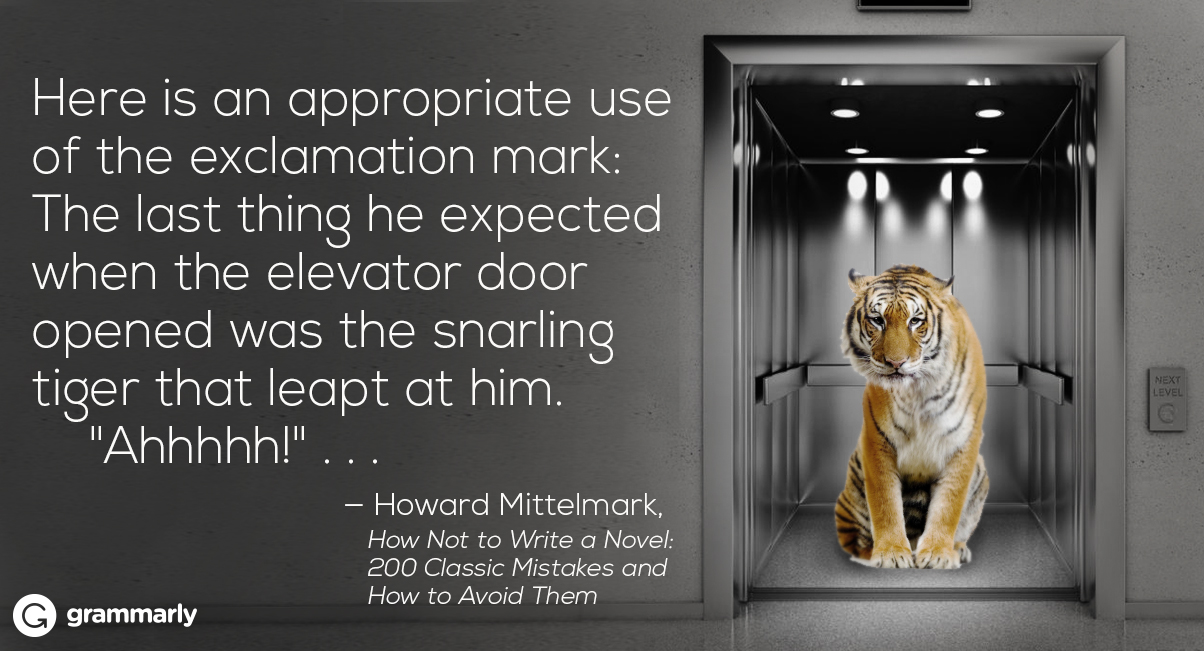 The exclamation point, also called an exclamation mark, is a punctuation mark that goes at the end of certain sentences. It’s less common than the period or question mark, but it’s very easy to use. Some might say it’s too easy to use.

What Is an Exclamation Point For?

Here’s a tip: Want to make sure your writing always looks great? Grammarly can save you from misspellings, grammatical and punctuation mistakes, and other writing issues on all your favorite websites.
I got a perfect score on the SAT! Get out of my sight!

Exclamation points are also commonly found with sentence fragments or sudden interjections. Occasionally, you might see one at the end of a sentence that is phrased as a question.

Careful! That spider is poisonous. Holy cow! How could I have forgotten to pack underwear!

“There’s a spider on my arm!” yelped Jeremy.

If the exclamation point applies to the sentence as a whole, then place it at the very end.

And then the paramedics tried to tell Jeremy it was “only a spider”!

Jeremy didn’t find out until later what kind of spider it was (a black widow!).

Put the exclamation point outside the parentheses if it applies to the whole sentence.

They settled out of court and Jeremy got a million dollars (cash)!

Using exclamation points and parentheses this way is relatively rare.

But using too many exclamation marks makes them less effective. F. Scott Fitzgerald said that using exclamation marks is like laughing at your own jokes. After a while, your readers will simply ignore them, or worse, become annoyed by them. On top of that, they’re considered to be relatively casual, so using them in business or formal academic writing is a no-no. Instead of relying on exclamation points to convey your urgency or excitement, use more vivid vocabulary. Instead of “Make sure you finish this by tomorrow morning!” try “It’s crucial that you finish this before tomorrow morning’s deadline.”

Congratulations! You just learned everything you need to know about exclamation points.