Passive Voice: When to Avoid It and When to Use It 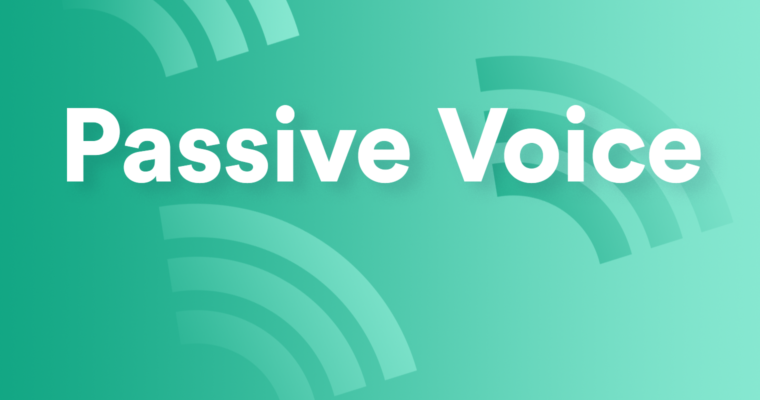 What is the passive voice?

In general, the active voice makes your writing stronger, more direct, and, you guessed it, more active. The subject is something, or it does the action of the verb in the sentence. With the passive voice, the subject is acted upon by some other performer of the verb. (In case you weren’t paying attention, the previous two sentences use the type of voice they describe.)

The difference between active and passive voice

While tense is all about time references, voice describes whether the grammatical subject of a clause performs or receives the action of the verb.

Here’s the formula for the active voice:

In a passive voice construction, the grammatical subject of the clause receives the action of the verb. So, the ball from the above sentence, which is receiving the action, becomes the subject. The formula:

The ball was kicked by Chester.

That last little bit—“by Chester”—is a prepositional phrase that tells you who the performer of the action is. But even though Chester is the one doing the kicking, he’s no longer the grammatical subject. A passive voice construction can even drop him from the sentence entirely:

The ball was kicked.

How’s that for anticlimactic?

When (and when not) to use the passive voice

If you’re writing anything with a definitive subject who’s performing an action, you’ll be better off using the active voice. And if you search your document for instances of was, is, or were and your page lights up with instances of passive voice, it may be a good idea to switch to active voice.

That said, there are times when the passive voice does a better job of presenting an idea, especially in certain formal, professional, and legal discussions. Here are three common uses of the passive voice:

1 Reports of crimes or incidents with unknown perpetrators

My car was stolen yesterday.

If you knew who stole the car, it probably wouldn’t be as big a problem. The passive voice emphasizes the stolen item and the action of theft.

The rat was placed into a T-shaped maze.

Who places the rat into the maze? Scientists, duh. But that’s less important than the experiment they’re conducting. Therefore, passive voice.

3 When you want to emphasize an action itself and the doer of the action is irrelevant or distracting:

The president was sworn in on a cold January morning.

How many people can remember off the top of their heads who swears in presidents? Clearly the occasion of swearing in the commander in chief is the thing to emphasize here.

In each of the above contexts, the action itself—or the person or thing receiving the action—is the part that matters. That means the performer of the action can appear in a prepositional phrase or be absent from the sentence altogether.

Creative ways to use the passive voice in writing

The above examples show some formal uses of the passive voice, but some writers take advantage of the shift in emphasis it provides for other reasons. Here are moments when the passive voice is a stylistic decision that suits the author’s writing goals.

There are times when you want to get away with something without making it crystal-clear who’s at fault. The classic example:

“Mistakes
were made.” —most politicians

Who made them? Is anyone taking responsibility? What’s the solution here? One political scientist dubbed this structure the “past exonerative” because it’s meant to exonerate a speaker from whatever foul they may have committed. In other words, drop the subject, get off the hook.

2 Beat around the bush

Jane Austen is a master of poking fun at her characters so euphemistically that it seems almost polite, and the passive voice is one of her favorite methods for doing that.

“[He] pressed them so cordially to dine at Barton Park every day till they were better settled at home that, though his entreaties
were carried to a point of perseverance beyond civility, they could not give offense.” —Jane Austen, Sense and Sensibility

“Though Mr. Middleton carried his entreaties to a point of perseverance beyond civility, they could not give offense.”

Though maybe she means something closer to:

“Mr. Middleton pushed his invitations beyond the point of politeness and into pushiness, but he still meant well.”

In cases like this, the passive voice allows for more polite phrasing, even if it’s also a little less clear.

3 Make your reader pay more attention to the something

This is like the president getting sworn in: the thing that gets the action of the verb is more important than the people performing the action.

“That treasure lying in its bed of coral, and the corpse of the commander floating sideways on the bridge,
were evoked by historians as an emblem of the city drowned in memories.” —Gabriel García Márquez, Love in the Time of Cholera

Here, you could invert the sentence to say “Historians evoked that treasure (and so on).” But that would take the focus away from that oh-so-intriguing treasure and the corpse. And since the historians are less important here, the author makes the choice to stress the key idea of the sentence through the passive voice.

Here’s another famous example that puts the emphasis on what happens to the subject, instead of on what the subject is doing:

“We hold these truths to be self-evident, that all men
are created equal, that they are endowed by their Creator with certain unalienable Rights, that among these are Life, Liberty and the pursuit of Happiness.” —The Declaration of Independence, 1776

“All men” (and these days, women, too) get boosted to the front of the phrase because their equality and rights are the focus. It makes sense that a statement declaring independence would focus on the people who get that independence, after all.

Writers use the passive voice. Can you?

Passive: Bob Dylan was injured in a motorcycle accident.

Passive: Elvis is rumored to be alive.

Active: Don’t allow anything to fool you!

There is nothing we can do about it.

There were a great number of dead leaves covering the ground.

Despite what any well-meaning English teachers may have told you, none of the sentences above are written in the passive voice. The sentence about the leaves, in fact, was (wrongly) presented as an example of the passive voice by none other than Strunk and White in The Elements of Style.

Here’s how to remember: using the verb to be doesn’t automatically put a verb phrase into the passive voice. You also need a past participle. That’s how to keep passive voice masqueraders from fooling you.

Passive voice is summed up here: