What Are English Proverbs? Definition and Examples 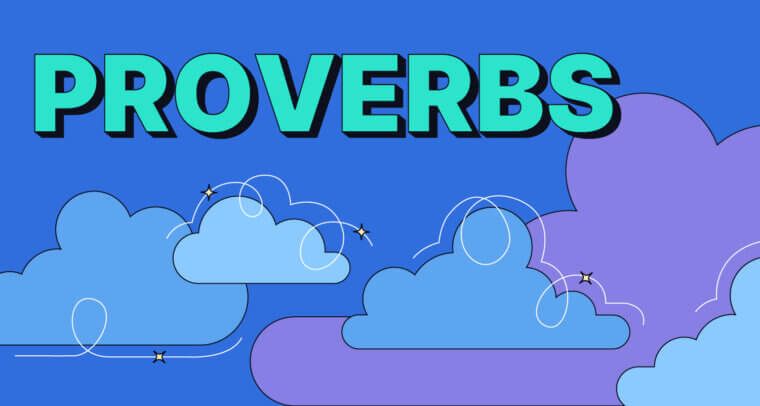 It’s Monday morning, and you’re sitting in a meeting with coworkers and your manager, who wants to get her team fired up for the week ahead.

“We need to strike while the iron is hot!” your manager insists, slamming her fist against the table and accidentally spilling her coffee. “The early bird catches the worm, after all.”

“It’s going to take some work, Rome wasn’t built in a day, but when the going gets tough, the tough get going!”

What is all this talk about irons, worms, and Rome? Surely, there’s no use for riddles this early in the workweek. In fact, these are not riddles but proverbs.

What are English proverbs?

An English proverb is a short, pithy statement that usually offers life advice, wisdom, or a truth. Proverbs are so common that native speakers of English may use them in conversation without realizing it.

Proverbs can offer a shortcut for explaining or imparting information as well. For example, rather than your manager saying, “We will only be successful if we approach the client before any other marketing firm reaches out to them,” she can simplify this explanation to “the early bird catches the worm.” Everyone in the meeting will know what she means. Proverbs communicate an understood and accepted message in a few well-worn and well-known words.

Oftentimes, proverbs are used to illustrate a point. Stylistically, they differ from regular forms of speech because they are metaphorical or symbolic in nature. Some proverbs can be reflective of a specific culture or locale, though the majority transcend regional barriers and are widely embraced and often passed down through generations.

In fact, some of the earliest recorded proverbs date back to the ancient Sumerians in 2000 BCE. According to archaeological studies, nearly 700 tablets containing more than 1,000 proverbs written by Sumerian scribes were discovered by researchers. When translated, the researchers were surprised at how easy it was to understand these snippets of Sumerian wisdom, showing how proverbs reach across cultures and time.

English proverbs should also not be mistaken for the Book of Proverbs, a book in the Old Testament.

Proverbs and idioms are similar and easily confused with one another. Both are forms of expression that are natural to groups of people and are short and pithy, and both are very challenging for English language learners to understand because they include innate meaning that isn’t always discernible just by reading the words. But they do have a few key differences. Idioms express an idea or thought and are phrases that contain a group of words that typically wouldn’t make sense together (e.g., it’s raining cats and dogs, pulling someone’s leg, by the skin of your teeth). They are also frequently used in poetry. Proverbs have a literal meaning and tend to express a truth or dispense advice such as actions speak louder than words; all’s well that end’s well; a leopard never changes its spots.

How to include English proverbs in your writing

Incorporating a proverb or two into your creative writing can be a fun or interesting way to play with words, but if you use these types of phrases too regularly, you can come across as disingenuous or clichéd. Instead, try challenging the narrative offered by the proverb.

In an essay, for example, it can be a strategic choice to start off with a proverb that is then disproved or challenged. Since the two goals of formal essay writing are objectivity and specificity, it might not seem like a good idea to introduce a proverb (which is often broad-ranging and general). But for this very reason, including a proverb that you then complicate or question can give your argument teeth or draw in the reader.

For example, in a philosophy essay, you could begin with:

“When it comes to observing art, many will agree with the truism that ‘beauty is in the eye of the beholder,’ meaning all aesthetic judgments are subjective. Recent studies have found that this may not be true, and there may in fact be standards of beauty that are accepted universally across cultures. Does this mean that beauty can be observed objectively?”

In this example, the paper’s main argument, that certain aesthetic judgments are universally observed, is perfectly set up thanks to the proverb’s inclusion. The well-known proverb is being challenged from the outset and can be explored in more depth by the supporting paragraphs.

Another way to use proverbs in writing is to consider them as prompts for a story. First, read through a list of proverbs and choose one that speaks to you. Perhaps you’re immediately drawn to a proverb like where there’s a will, there’s a way and are reminded of a time when you sacrificed everything to achieve a goal.

Since proverbs are symbolic in nature, it’s easy to read one and be reminded of a particular memory or moment in your life when you witnessed that same teaching. Writing about how a certain proverb illustrates a personal story is a great way to spark a longer narrative.

There are hundreds, if not thousands, of proverbs—many of which are short and sweet. Here’s a list of thirty-five common English proverbs and their meanings:

1 The apple doesn’t fall far from the tree.

Meaning: Children tend to resemble their parents in appearance and behavior.

2 All that glitters is not gold.

Meaning: Something that appears valuable or true may not be.

3 A picture is worth a thousand words.

Meaning: Artwork or images can convey meanings that go beyond verbal description.

Meaning: People who depend on the generosity of others must be content with what is offered to them.

5  A bird in the hand is worth two in the bush.

Meaning: What you already have in hand is better than what you might get.

6 An apple a day keeps the doctor away.

Meaning: If you eat healthily, you will be healthy.

Meaning: It is better to be precautious than to have regrets later on.

8 Blood is thicker than water.

Meaning: Relationships between family members are the strongest of all.

Meaning: When you visit a new place, leave all judgments behind and embrace the local ways of life.

10 Don’t count your chickens before they hatch.

Meaning: Don’t make plans based on events that haven’t happened.

11 Every cloud has a silver lining.

Meaning: No matter what difficult situation you’re in, there is always a positive side to be seen.

12 A journey of a thousand miles begins with a single step.

Meaning: It is necessary to take the first step to achieve a long-term goal.

13 Necessity is the mother of invention.

Meaning: When you really need something, you find a way to make it happen.

Meaning: Someone’s wrongful conduct is not justification for acting in the same way.

15 The pen is mightier than the sword.

16  Birds of a feather flock together.

Meaning: People tend to stick together with other like-minded people.

Meaning: Don’t procrastinate or delay taking action, as we have no control over the passage of time.

19 Too many cooks spoil the broth.

Meaning: Too many people working on the same project can lead to an inferior result.

Meaning: If there are rumors or signs that something is true, it usually is.

Meaning: If something works well already, don’t bother trying to change it.

What is a proverb?

As a basic definition, a proverb is a traditional saying or phrase that expresses a perceived truth. Proverbs often give practical advice and are based on the shared human experience.

An English proverb is one that is used primarily by native English speakers. However, proverbs may be found in many languages.

How are proverbs and idioms different?

Proverbs and idioms are similar in that they impart wisdom or meaning to a group of people. Idioms contain a group of words whose meaning is established by usage but isn’t apparent as a phrase, such as under the weather, spill the beans, and once in a blue moon. Proverbs are short phrases with a literal meaning that taps into a shared truth or imparts advice, such as a chain is only as strong as its weakest link, absence makes the heart grow fonder, and don’t bite off more than you can chew.

When should you use English proverbs?

English proverbs can be used for many reasons, such as to offer advice, reinforce morals, impart knowledge, relieve interpersonal tensions, aid in understanding, or to console someone. Proverbs are used best when illustrating a specific point, giving greater potency to what is being said.