Adjectives and Adverbs–What’s the Difference? 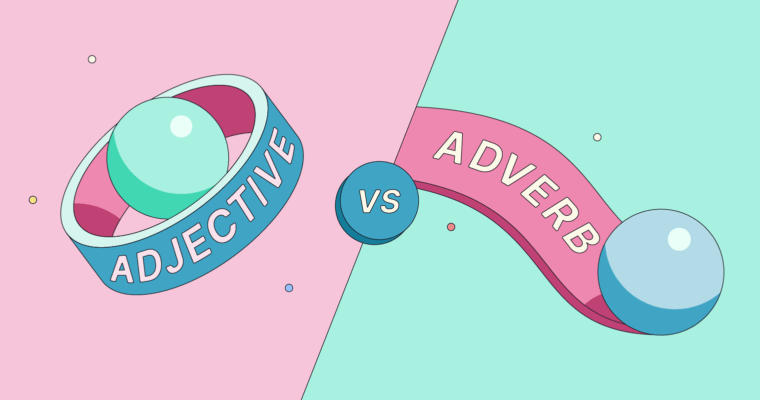 An adjective is a word that describes nouns, such as large or beautiful, and an adverb is a word that describes verbs, adjectives, and other adverbs, such as silently or really. That’s the basic difference between adjectives and adverbs, but there’s more to it than that: How can you tell them apart, how do you change them into each other, and which do you use with linking verbs?

Below, we answer the question: What’s the difference between an adjective and an adverb? We’ll discuss how and when to use each and share plenty of adjective and adverb examples.

What’s the difference between an adjective and an adverb?

Adjectives describe only nouns, including pronouns. So if you have a noun like dog, you can give more details about it by adding adjectives.

Sometimes multiple words work together to describe a noun. This is called an adjective phrase, and you can treat these groups of words the same as individual adjectives.

Additionally, special adverbs like really or very can also describe other adverbs. When adverbs are used like this, they usually describe the degree of intensity or frequency.

Sometimes you can use a shortcut to tell the difference between adjectives and adverbs. If you see a word with –ly at the end, it’s usually an adverb.

Be careful, though, because this isn’t always true. For example, words like curly, elderly, friendly, and lovely are all adjectives that end in –ly. However, most words ending in –ly are adverbs, and remembering this can help you distinguish between adjectives and adverbs that have the same root word.

When it comes to adjectives vs. adverbs, a lot of confusion comes from linking verbs. If you’re unfamiliar with linking verbs, they’re a type of verb that does not show an action but instead shares more details about the subject.

The most common verb, be, is a linking verb. So when we say, “She is the mayor,” the noun mayor describes the subject, which is the pronoun she. Other common linking verbs are become and seem as well as sensory verbs like look, feel, and smell.

Let’s look at two examples, one with the adjective bad and the other with its adverb counterpart, badly.

In this example, we use the adjective bad, so it describes the subject, the noun lizard. Here, the lizard has a bad odor, so don’t stick your nose too close to it!

In this example, we use the adverb badly, so it describes the action, the verb smell. Here, the lizard has trouble smelling; maybe it has a cold and its nose is stuffed up.

How to turn adjectives into adverbs

Because adjectives and adverbs are so closely related, some root words can be used for both. That makes it easy to turn some adjectives into adverbs and vice versa.

For many adjectives, all you have to do is add -ly to the end to make an adverb.

If the adjective ends in a –y, drop the –y and add –ily to make an adverb.

If the adjective ends in -tle or -ble, replace the –e with a –y to make an adverb.

If the adjective ends in –ic, add -ally to make an adverb.

However, keep in mind that not all adjectives follow these rules.

For starters, some words can be both adjectives and adverbs without changing anything. We discuss those in the next section.

Adjectives that end in –ly, like silly, ugly, or friendly, don’t have acceptable adverb counterparts. You’d have to use a synonym or phrase the sentence a different way.

Moreover, the common adjective good has an irregular adverb counterpart: well. This can lead to some accidental mistakes, so always be aware of which type of word you’re describing.

There’s another source of potential adjective vs. adverb confusion: Some words stay the same whether they’re used as an adjective or an adverb. It can be difficult to figure out how the words below are used, so pay special attention to the word they describe to determine whether they’re adjectives or adverbs.

What are adjectives and adverbs?

Why are adjectives and adverbs easily confused?

How are adjectives and adverbs different?

The main difference between adjectives and adverbs is the types of words they describe: Adjectives describe nouns and adverbs describe verbs, adjectives, and other adverbs. Moreover, most (but not all) adverbs end in –ly, although there are a few adjectives that also end in –ly.