What Is Subject-Verb Agreement? 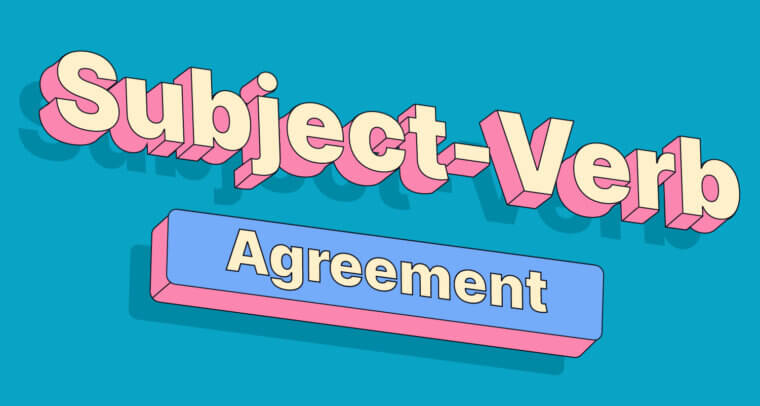 Subject-verb agreement is the grammatical rule that the verb or verbs in a sentence must match the number, person, and gender of the subject; in English, the verb needs to match just the number and sometimes the person. For example, the singular subject it and the plural subject they use different versions of the same verb: “it goes . . . ” and “they go . . . ”

What is subject-verb agreement?

Subject-verb agreement, also called “subject-verb concord,” refers to matching the subject and verb of a sentence in tense, aspect, and mood (abbreviated as TAM), which translates to number, person, and gender.

Basically, most subjects except third-person singular use the standard form of a verb in the present tense.

The dogs roll in the mud.

I need to catch my breath.

However, if the subject is third-person singular, you must use the singular form of the verb when speaking in the present tense. Most of the time, this means adding an -s to the end of the verb.

The dog rolls in the mud.

She needs to catch her breath.

My snake hisses to say “I love you.”

She only matches with creeps in online dating.

If the verb ends in a consonant + y, remove the y and add –ies to match the third-person singular.

Atlas carries the world on his shoulders.

The new drone flies higher than the old one.

However, with words that end in a vowel + y, follow the normal format and add only –s to make the third-person singular.

My roommate stays in his bedroom from morning to night.

With the exception of the verb be, these guidelines apply to irregular verbs as well as regular verbs.

Our father eats with the ferocity of a tiger.

So why does the verb be have so many exceptions? The most common verb in English, be doesn’t just represent a general state of existence; it’s also an auxiliary verb necessary for the continuous tenses.

In English, be is the only verb that changes based on the person. If you’re using the verb be, alone or as part of a continuous tense, the subject-verb agreement rules require that you match both the number and the person. Here’s a quick reminder of how to conjugate be in the singular and plural of each person:

Considering how frequently be is used in English, it’s best to memorize this chart so you can apply the proper subject-verb agreement instinctively.

You are always welcome in our home.

I am running a marathon tomorrow.

It is raining even though it is sunny.

If the subject-verb agreement rules seem complicated, there is some good news: the simple past and simple future don’t change based on the number or person of the subject. Both singular and plural subjects use the same form for those tenses.

They will be here tomorrow.

He will be here tomorrow.

The only exception is, again, the verb be, which changes between was and were based on the subject in the simple past tense.

I was young once.

We were young once.

On the other hand, the perfect tenses change their auxiliary verb depending on the number of the subject. Singular subjects use has, and plural subjects use have.

They have not seen the movie yet, so no spoilers.

She has not seen the movie yet, so no spoilers.

That covers the basics for subject-verb agreement in English. Still, there are some particularly difficult areas and more precise rules for special situations, which we explain below.

1 When using the negative form in the present tense, only the verb do needs to match the subject.

She likes reading before bed.

2 Likewise, in questions that involve the word do, only do needs to match the subject.

Do you know where the train station is?

Does anyone know where the train station is?

3 If the subject consists of multiple nouns joined by the conjunction and, treat the subject as plural and use the plural form of the verb.

Lucas and Maxine are in love!

Only Lucas is in love.

However, some common phrases that form a single unit can act as singular.

This bed and breakfast is delightful!

4 If the subject consists of multiple singular nouns joined by or, treat the subject as singular.

Penne or rigatoni works fine for the recipe.

However, if the subject consists of multiple plural nouns joined by or, treat the subject as plural.

If there’s a combination of singular and plural nouns joined by or, the verb follows the number of the final one listed.

The teacher or the students have to inform the principal.

The students or the teacher has to inform the principal.

5 If there is more than one active verb, as with compound predicates, all the verbs must agree with the subject.

After work, I go shopping, pick up the kids, cook dinner, and then relax for the night.

Love makes the world go around.

7 Collective nouns can be either singular or plural, depending on whether they act together or separately.

[Together, singular] The team goes to practice at 4:00.

[Separately, plural] The team go to their own homes after practice.

8 Verbs used in alternative forms, such as gerunds, infinitives, or participles, do not need to follow subject-verb agreement. However, the main verbs of the sentence still do.

9 Unless you’re using an appositive or other descriptive phrase, do not put a comma between subjects and verbs.

The holiday is becoming a total disaster.

The holiday, which I was looking forward to, is becoming a total disaster.

10 The words each and every count as singular when they’re used as the subject, even if they’re followed by multiple nouns.

Each window and door needs to be sealed.

Every doctor, nurse, and technician gets free training here.

11 Likewise, these words always act as singular subjects, even when they describe more than one thing:

Either blue or green works for the wallpaper color.

12 If additional phrases come between the subject and the verb, the verb must still agree with the subject. These sentences can be tricky, so be careful.

A group consisting of Professor Lidenbrock, the Icelandic guide Hans Bjelke, and the professor’s nephew Axel departs for the volcano.

Be particularly careful of subjects that use the phrase “one of . . . ” The word one is singular, even when followed by plural nouns.

One of the world’s leading scientists still has trouble speaking in public.

They pay the electric bill online.

The electric bill is paid by them online.

There is a new map in the DLC.

There are new maps in the DLC.

15 Similarly, words that indicate a portion, including percentages, use the number of the noun they describe. This noun is typically the object of the phrase “of . . . ”

All of the book is ruined!

All of the books are ruined!

Some of the film is funny.

Some of the films are funny.

Fifty percent of the house is made of wood.

Fifty percent of the houses are made of wood.

16 When referring to distances, periods of time, or amounts of money—taken as a whole—use the singular form of the verb.

Twenty dollars is too much for IMAX!

17 Be careful of nouns that exist only in the plural form; they sometimes act as singular.

The news has been depressing lately.

Politics is getting too combative.

However, some of these nouns act as plural.

The scissors do not work.

If a plural noun is preceded by the word pair, treat the subject as singular because pair is singular.

The pair of scissors does not work.

What is subject-verb agreement?

How does subject-verb agreement work?

What are examples of subject-verb agreement?