Common Clichés and How to Avoid Them in Your Writing 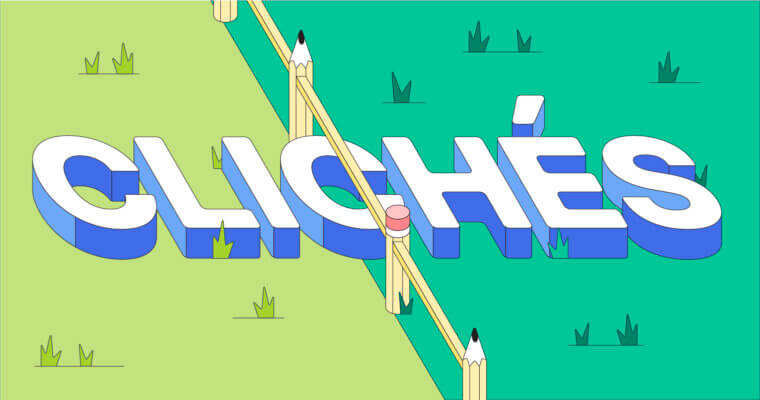 There are many distinctive features of masterly writing, and clichés aren’t among them.

Clichés are stock phrases that you read so commonly they’re almost meaningless, like “clear as a bell” or “the fact of the matter.” Such phrases bore attentive readers and can suggest laziness or even a lack of originality. So it’s wise to avoid clichés in your writing—either by striking them outright or reworking your ideas to make them more your own.

Because clichés abound (they wouldn’t be clichés if they were rare, after all), you may feel so used to seeing some that you barely notice them. Spotting and remedying clichés in your writing takes practice and care, so we offer some tips below.

Use stronger vocabulary
Grammarly helps you refine your word choice

First, what exactly is a cliché?

Clichés come in several forms. Many are tired sayings and metaphors that evoke zilch. There are lifeless similes like the aforementioned “clear as a bell” or the similarly bland “clear as day,” which scarcely conjures sunshine.

And the fact of the matter is some are needlessly bloated phrases you could easily trim down. For instance, that last sentence could become more direct by simply starting with “the fact is,” or better yet, skipping the bit about facts altogether.

Other examples of clichés include shopworn proverbs like “when it rains, it pours” and mental shrugs like “whatever happens happens.”

So what are some strategies for finishing a draft that doesn’t sleepwalk through a procession of trite clichés?

Get them out of your system

Don’t let a well-founded aversion to clichés stop you from getting your initial ideas down, however imperfectly. If you find yourself relying on clichés while assembling your first draft, it’s fine—make a note to replace or remove them later. As author Anne Lamott famously put it:

“Almost all good writing begins with terrible first efforts. You need to start somewhere. Start by getting something—anything—down on paper.”

Note that’s precisely what happened with the words you’re reading now. An early draft was packed to the gills with awful clichés like, well, “packed to the gills.” We mostly improved such phrases using one trusty tool: the delete key. Read on.

You can often just cut them

A lot of clichés amount to stale filler. They don’t have to be replaced, only removed, because a short draft is almost always preferable to one that takes twice as long to say the same thing.

In other cases, clichés can detract from your meaning. “I have too much on my plate as it is” amounts to a roundabout way of telling your editor, “I can’t take another assignment right now.” Here, lose the cliché and say what you mean.

Remember: Sometimes, when you’re looking to simplify your writing, the dictionary can help you find the right words more than the thesaurus.

>>Read More: 6 Ways to Be Less Wasteful in Your Writing

Try replacing them with something fresh

You don’t always have to reinvent the wheel (argh, sorry). But occasionally, it’s fun to tinker with clichés and try to craft something unique and memorable.

For example, suppose you’re congratulating a fellow writer who just got two story ideas approved. “You lucky dog!” might not conjure much of an image, but “You’re as lucky as a dog in a bin full of beef jerky” certainly does.

Not every cliché has to go

In his acclaimed novel Slaughterhouse-Five, Kurt Vonnegut used cliché to powerful effect, repeating the phrase “So it goes” as a way of facing death.

Indeed, in certain contexts, clichés are fine—but, be deliberate and sparing with them.

If you choose to incorporate clichés into your writing, be careful not to combine them, warned George Orwell in his landmark essay “Politics and the English Language”:

“Incompatible metaphors are frequently mixed, a sure sign that the writer is not interested in what he is saying.”

In other, highly inelegant words, when you’re tackling clichés in your writing, you don’t want a whole different kettle of fish to fry.