Possessive Nouns: How to Use Them, With Examples 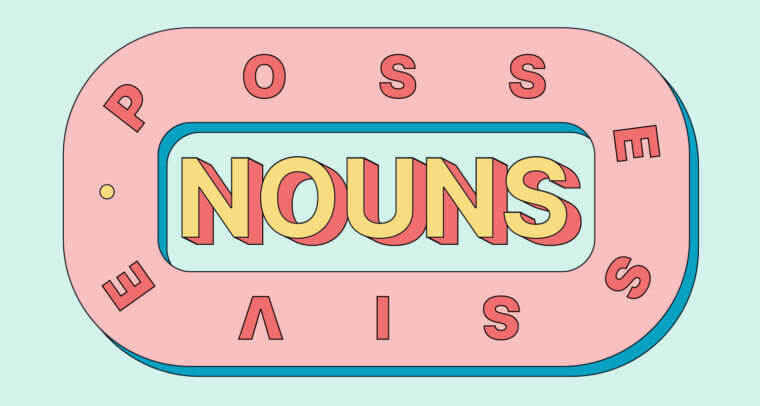 What is possessive form?

Let’s look at some examples in an actual sentence.

There are two possessives in this sentence. The possessive adjective his, which reflects Aiguo, shows ownership of the hat. The possessive noun Tony’s, which is identified by the ’s at the end, shows that the car belongs to Tony.

What is a possessive adjective?

In this guide we focus specifically on possessive nouns, so we won’t talk much about these possessive adjectives. We thought it’d be helpful to include them here just for comparison.

What is a possessive noun?

Possessive nouns are nouns that show ownership or a direct connection. Typically, singular possessive nouns use an apostrophe ( ’ ) and the letter s at the end of the word to take the possessive form. Almost any noun can become possessive, even abstract nouns.

Pay close attention to that apostrophe: in English, we also add s to the end of words to make them plural. So the apostrophe can determine whether a noun is possessive or plural, as in the case with boys versus boy’s. In these examples, boys means more than one boy (plural), but boy’s means one boy has ownership over something (singular possessive).

You can also show ownership or connection without possessive nouns by using the preposition of:

In this case, the owner (Kali) is the object of a prepositional phrase with of, and the thing that is owned (the desk) comes first. When using this construction, you do not need an apostrophe or the letter s.

Nouns that end in s, especially proper nouns, can cause a lot of confusion. However, it’s OK to add an ’s after an s, as long as the noun is singular (the boss’s chair).

Plural nouns are more difficult to make possessive because they already have an s at the end. As you can see by the plural possessive examples below, the proper construction is to add only an apostrophe to the end.

Possessive pronouns refer to the noun form of pronouns that show possession. Like regular pronouns, they are used in place of other nouns to avoid repetition.

mine computer
computer of mine

1 How to form possessives with two or more nouns

What if something is owned by more than one person? There are two ways to handle possessives with multiple nouns, known as compound possessives. The correct method depends on whether the nouns relate to the same thing or whether they each relate to different things.

If multiple nouns own or connect to the same object, only the last one in the series is possessive.

If multiple nouns each own different versions of the same thing, make each separate noun possessive.

Notice how, in these examples, the objects of the possessive are also plural (rooms and policies) because there’s more than one.

2 How to form possessives with hyphenated and compound nouns

Hyphenated and compound nouns can seem tricky, but they’re actually pretty simple. If they’re singular, just add an apostrophe and an s to the final word.

If the nouns are plural with a regular s at the end, add only an apostrophe to the final word.

However, if the word is plural without an s at the end, add both an apostrophe and an s to the final word.

3 How to add emphasis with the adjective own

Use the adjective own before the object of the possessive to add a special emphasis. This comes in handy if you want to draw attention to the connection or ownership to better communicate your meaning.

What is a possessive noun?

A possessive noun is a noun form used to show ownership or a direct connection. It’s commonly recognized by the apostrophe and letter s at the end, as in Charlotte’s web or the tree’s branches.

What are the different kinds of possessive nouns?

When should you use possessive nouns?

Possessive nouns are used to show ownership or a direct connection, usually coming directly in front of the object of ownership. Alternatively, you can show ownership with the preposition of, as in the bone of the dog.