How to Eliminate Dangling Modifiers from Your Writing 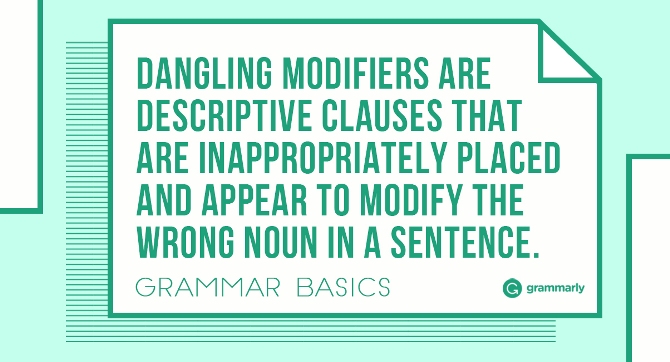 What is a dangling modifier? Don’t worry; it’s not as gruesome as it sounds. It’s a grammatical error where the modifying word or phrase is attached to the wrong subject or where the subject is missing in a sentence. It’s fairly common and plagues even the best of writers.

There are two common reasons for dangling modifiers.  The first is due to the modifying word or phrase being placed too far from the word or group of words it’s meant to modify. The second happens when the sentence doesn’t include a logical subject to modify. In both situations, dangling modifiers make the meaning of a sentence unclear — confusing the reader.

“Taylor was upset with Fred when he returned her damaged car with an air of nonchalance.”

Who had an air of nonchalance? From this sentence, it appears the car did.  Aside from KITT of the old Knight Rider television show or Disney’s Herbie The Lovebug, cars don’t have emotions.  “With nonchalance” dangles because it is too far away from the subject the writer intends to modify, which is, in this case, Fred.

“Walking into the room, the smell was overpowering.”

This sentence makes it sound like the smell walked into the room, a physical impossibility. In this case, there is no subject for the participial phrase, “walking into the room,” to modify. Hence, it dangles. Most cases of dangling modifiers can be fixed by identifying the subject you want to modify, making sure it’s present, and placing the modifier immediately before or after it in the sentence: “Walking into the room, they encountered an overpowering smell.”

Identify and Include a Logical Subject

Put the Modifier Close to the Word or Phrase It Modifies

Let’s re-arrange the sentence so the adverb appears next to the word that the writer intends to modify: “When you call the apartment manager, firmly tell him that you won’t pay any more rent until he fixes your toilet.”

Observe the following sentence: “To improve his score, the test was taken again.” It isn’t clear who wanted better test scores. A more clear and concise way to write the sentence is to unify the two clauses into one: “He improved his score by retaking the test.” Or, “He retook the test to improve his score.” Now, the sentence has an identifiable subject, “he,” and the phrase, “improve(d) his score” logically applies to him.

While dangling modifiers often result in sentences that cause a giggle, they also muddle a person’s writing and make the writer’s meaning unclear. Fortunately, correcting them is a simple matter, and the result is writing that’s more concise and easier to read.

How about you? Do you notice your own dangling modifier errors, and how do you deal with them?