Direct Objects in English (with Examples) 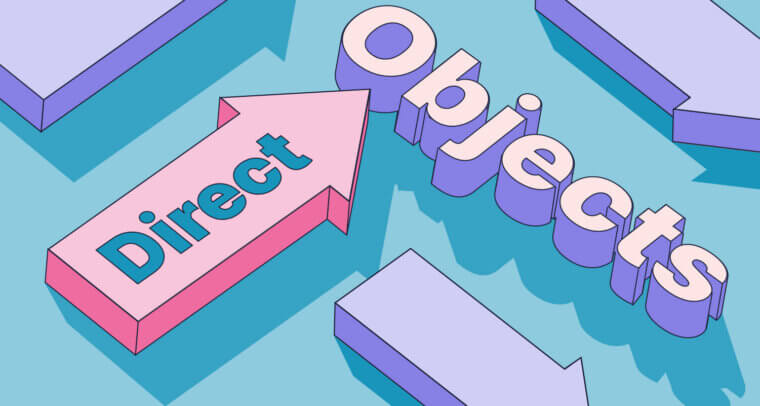 In English grammar, a direct object is a word or phrase that receives the action of the verb. In the sentence The students eat cake, the direct object is cake; the word eat is the verb and cake is what’s being eaten.

But first, let’s dive deeper into the essential question:

What is a direct object?

Direct objects usually answer the questions “what?” or “whom?” Let’s take another look at the direct object example above.

Ask yourself, “What did the students eat?” The answer is the direct object, which in this case is  “cake.” Let’s try a new direct object example:

The family hugged their dog.

What’s the direct object? Ask yourself, “Whom did the family hug?” The answer, of course, is “dog.”

Not all verbs use a direct object. Some verbs, like laugh and sit, can’t use direct objects because it doesn’t make sense—you can’t laugh something or sit someone; that’s gibberish.

We all laugh at Anania Williams.

However, it is correct to say, “We enjoy Anania Williams.” In this case, the verb enjoy is transitive, so we can make Anania Williams a direct object, no preposition needed.

Sometimes a verb can be both transitive and intransitive, depending on the usage. If a verb has more than one meaning, some uses could be transitive while others are intransitive.

We drove to the mall. (intransitive)

My sister drove us to the mall. (transitive)

She played drums in a heavy metal band.

She played what? She played drums. Here, “play” is transitive.

The band played what? Because there’s no answer, it means here “play” is intransitive.

Direct objects aren’t always just one word; sometimes they are entire phrases or even clauses. These phrases always act collectively as nouns, so aside from standard noun phrases, they’re often relative clauses (clauses that begin with a relative pronoun like “what”) or gerund phrases (noun phrases that start with gerunds).

The foul ball hit a car parked outside.

Don’t forget what your mother said.

English professors love naming every tiny word in a sentence.

You can sometimes use the infinitive form of verbs as a direct object, but be careful you don’t confuse the to in an infinitive with the to in a prepositional phrase.

Everyone wants to eat later.

With direct objects, always use the object pronoun. If you’re unfamiliar with the differences, you can review subject and object pronouns here, but there’s a quick chart as a reminder below.

My brother loaned me five dollars.

They are an expert at procrastination.

In this example, “an expert” may seem like a direct object, but it’s really a complement, as it explains more about the subject, in this case, “they.” The verb are, a conjugation of be, is a linking verb, not a transitive verb.

Let’s look at some direct object examples from literature and pop culture, so you can see how they work. The direct objects are underlined.

“If you cannot do great things, do small things in a great way.”

“‘Let me check my calendar’ is the adult version of ‘let me ask my mom.’”

beauty, but not everyone sees it.”

“A bank is a place that will lend you

money if you can prove that you don’t need it.”

our today so that our children can have a better tomorrow.”

to be somebody, but now I realize [that] I should have been more specific.”

“In three words I can sum up

everything I’ve learned about life: It goes on.”

This article was originally written in 2015 by Ann Edwards. It’s been updated to include new information.