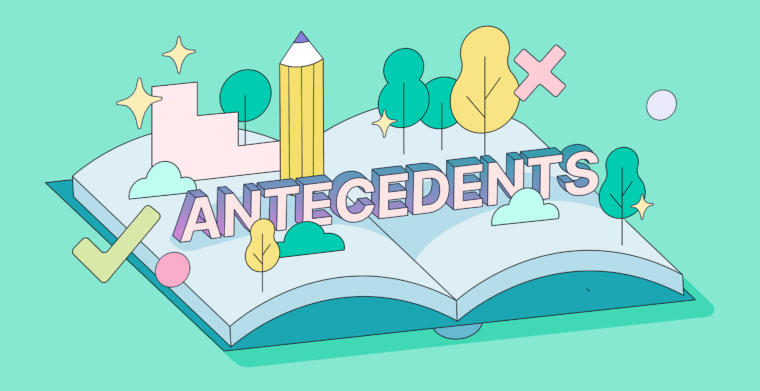 In English grammar, an antecedent is a person, place, thing, or clause represented by a pronoun. It is also known as a referent.

Antecedents are used to clarify what or who a pronoun is referring to in a sentence, and without one, a sentence may be incomplete or meaningless. For example, in the phrase “He needs to go outside,” he could be a dog or a person who’s been stuck in the house all day.

“The dog’s been barking for hours—he needs to go outside.” In this sentence, the antecedent, the dog, makes it clear who he is.

In this piece, we’ll go over why antecedents are important in English grammar, how to use them, and when not to use them, as well as give you some examples.

What is an antecedent?

In grammar, an antecedent is a noun or a noun phrase that gives meaning to a pronoun that, most of the time, comes after the antecedent and replaces it.

We say most of the time because, even though the prefix ante- means before or in front of in Latin, there are cases when the antecedent comes after the pronoun.

The antecedent, Jasmine, comes after the pronoun but still clarifies who her is referring to. These are, technically, known as postcedents—the prefix post- means after or behind.

Antecedents and their corresponding pronouns can be found in the same or separate sentences.

The antecedent, Barry, gives meaning to the pronoun, he, in the second sentence.

Pronouns are not the only thing that can replace an antecedent in a sentence. Certain nouns or noun phrases can also take the place of an antecedent.

The noun phrase favorite student refers to the antecedent, Adam.

There are also times when it might be necessary to have two antecedents in a sentence.

How do you pronounce antecedent?

The word antecedent is pronounced an-tuh-see-dnt in both American and British English.

What are the rules for using antecedents?

Both the antecedent, Susan, and the pronoun she are singular.

Because we’re referring to multiple children, the pronoun, in this case, they, must be plural as well.

This can get tricky when dealing with compound subjects, or two nouns linked by a conjunction (such as and or or). Oftentimes, the conjunction used in a sentence determines whether the pronoun should be singular or plural.

The antecedents Morgan and Sarah are connected by the conjunction and, which means the pronoun has to be plural since it’s referring to both people.

In this case, the conjunction or is linking two singular nouns, meaning that only one person, not both, will be in charge of time management, so a singular pronoun should be used.

Sometimes it’s necessary to use they, which can be singular or plural, to refer to a singular antecedent. For example, use they when you don’t know the gender of the person you’re referring to or if that person identifies as non-binary and uses they/them pronouns.

In this example, the antecedent includes both a singular and plural noun. The pronoun should agree with the part of the antecedent that it’s closest to—in this case, her sisters, which is plural.

Some subjects may sound plural but are singular in meaning, in which case you would use a singular pronoun.

Although dominoes sounds like a plural noun, it’s referring to the singular sport, so the pronoun, in this case the possessive pronoun case its, must be singular.

One other thing to keep in mind is that an antecedent and its pronoun may be separated by a clause or phrase that’s a different number, but it should not change the agreement between the two.

In the above sentence, the subject set and the pronoun its are both singular even though they’re separated by the plural noun VHS tapes.

When should you use antecedents?

As discussed earlier, antecedents should be used to make it clear who or what a pronoun is referring to. Although the antecedent typically comes before the pronoun, there are cases in which it might come after.

But antecedents and pronouns can also be used to liven up one’s writing and avoid repetition. Read the following two sentences and pick which one sounds better.

The second sentence eliminates the repetition of Neil by replacing it with the pronouns he and his. It’s important to remember that those pronouns have meaning only because of the antecedent, Neil.

When don’t you need an antecedent?

The only time antecedents do not need to be used is when the context makes it clear who a pronoun is referring to.

For example, if you were writing a short story about a man trapped on a desert island by himself, there would be little to no need to use an antecedent because it’s clear that any use of he or him is referring to that man since he’s the only one on the island.

However, if you wanted to introduce another character, perhaps from the trapped man’s past, you would need an antecedent to clarify whether you were talking about the man on the island or the other character.

In the same vein, antecedents don’t need to be repeated before or after every pronoun as long as it’s clear who or what the pronoun is referring to. If two male characters are engaged in dialogue about a specific female character, the writer could use the pronouns she, her, or hers for several paragraphs because it’s clear they’re referring to the aforementioned character.

If another female character is mentioned at any time during the same scene, an antecedent must be used to clarify which character any subsequent pronouns are referring to.

Here are five different examples of how to use antecedents in a sentence.

What is an antecedent?

An antecedent is a noun or a noun phrase that gives meaning to pronouns. It is called an antecedent (the prefix ante– comes from the Latin word before or in front of) because it usually comes before the pronoun. But there are times when the antecedent comes after the pronoun, in which case it’s technically a postcedent.

How does an antecedent work?

An antecedent is placed near a pronoun to make it clear who or what the pronoun is referring to. The phrase “He needs to go outside” has little meaning because it’s unclear if he refers to a dog or to a person who’s been stuck in the house all day. An antecedent must be used to clarify who he is, and it would be either a dog or a person’s name.

When should you use antecedents?

You should use antecedents to clarify who or what a pronoun is referring to. You should also use them to avoid repeating the name of a person or place multiple times in a sentence.