What Is Tone in Writing? 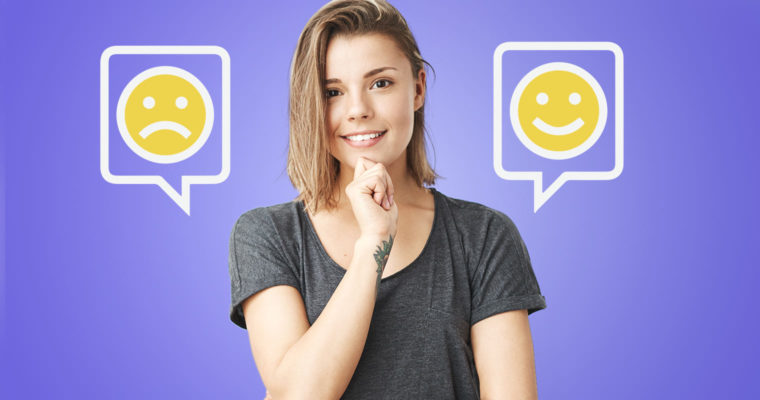 “Tone, to me, is like the Harry Potter house-elf of craft,” says author and sensitivity reader Dennis Norris II. “If I remember the language of something I’ve read, I am remembering the tone. It’s just there, and you’re benefiting from it. If the work was memorable, the tone played a role in it.”

Whether you’re writing a book, a tweet, or an email, emotion and tone help define the message. To help you master it, we’ve put together this guide to tone, emotion, and writing:

What is tone in writing?

Tone in writing is the attitude your words employ. Just like tone of voice, tone in writing gives much more context beyond the words used. It can reveal intention or conceal it. As memoirist and writing coach Adair Lara says, “Tone is what the dog hears.”

If, for example, your boss sent you a Slack message that said, “Do you have a minute to talk?” you might think, “Oh no, what’s wrong?” If she rephrased it as, “Got time to chat real quick?” you might be less alarmed. There isn’t a negative force lurking in the background. That contrast is because of tone.

And while the emotional response you take away from a message may not necessarily be the intention of the sender, it still exists, and people will seek it out when reading. “If the reader doesn’t respond the way you want them to,” says Lara, “you don’t have a reader.”

What informs tone in writing?

Tone, like language itself, works because people agree on the meaning behind words. Cultural norms often dictate how those are perceived. And it takes knowledge of those norms and expectations, as well as the context of the conversation, to be able to convey the intended emotions. The stakes are often elevated to match the importance of the message, so more attention is warranted. Norris II is well-versed in this phenomenon.

“When I’m doing a sensitivity read, I typically examine every single aspect of the work—the language, the content, the plot, the psychology of the characters, the [political and personal] context,” they say. “Inequity doesn’t exist in a vacuum, and neither does humanity. I have to mine the work incredibly closely if I’m going to help the author complete a piece that doesn’t further marginalize folks who are often not portrayed, or not lovingly portrayed, on the page.”

Even if you aren’t writing a book about complex topics like race, gender, and class, tone-based misinterpretation can still happen in everyday exchanges. If you’re texting someone you just met and are interested in romantically, the difference between “For sure!” and “OK” can be painfully apparent. That has to do with the cultural expectations placed on words within the context of texting.

“Perhaps because we have become accustomed to exclamation points and emojis, when they are missing, the text can seem angry or cold,” notes Dr. Tchiki Davis, founder of the Berkeley Well Being Institute. In fact, that gap between the desired emotional reaction and perception is very common. And many readers will read text as slightly more negative than the writer intended.

Types of tones in writing

Tone is as diverse as our emotions. It can convey the positive, negative, neutral, and everything in between.

Let’s say you were invited to someone’s party. Here are a few examples of tones that can be employed in a response:

Appreciative: Thanks for inviting me!

Joyful: Yes! My heart is leaping with joy!

Informal: Yeah, see ya at the party

Formal: This is to inform you that I’m going to join you at the party.

Confused: I have no clue.

Skeptical: Have you really thought this through?

How does tone impact a reader’s emotional response?

This complex relationship starts in your amygdala, which is where your brain processes emotions. It’s theorized that it interacts with the visual cortex and the orbitofrontal cortex (a.k.a. where your decision-making comes from) to produce the relationship between emotion and the written word. So you see the words on the page, interpret their meaning, add a layer of emotional context, and that engenders words with emotional meaning.

Except the amygdala isn’t always as involved in language comprehension. It varies in strength from person to person. And not every word carries the same emotional weight. So in that way, there is an element of the unknown.

Still, there’s room for a scientific approach to mastering tone. According to Plutchik’s wheel of emotions, feelings can generally be calculated based on the combination of basic emotions. So to create a feeling of love, there must be both joy and trust. Or to make envy, you’d combine sadness and anger. (Think of it as the alchemist’s guide to emotion.) When combined with the NRC Word-Emotion Association Lexicon, which sorts words into corresponding emotional reactions, feelings can be reverse-engineered, word by word.

How to intentionally create tone in your writing

Once you’ve figured out your desired tone, here are a few things you should keep in mind while writing:

Word (or emoji) choice: In general, it’s best to strive for positivity. If a word or emoji feels wrong, consider rephrasing, removing it, or using a thesaurus to find the word that best fits your intention.

Personal pronouns: Pay attention to the main subject in a sentence. For example, “you” puts the onus on the reader, while “I” or a lack of personal pronouns is less likely to make the reader feel called out. It’s not a bad thing to use “you,” and there are situations where it makes sense. Just make sure it’s the right call for the situation. Pronouns are also important when it comes to addressing people. Failing to use the correct pronoun (he/she/them) can create a tone of disrespect.

Punctuation: Lack of punctuation is more casual, which can make it tricky to pull off in professional settings. Punctuation isn’t always critical to tone, but keep in mind that it can have an impact.

Consistency: One tone-deaf sentence has the power to destroy all of your hard work. It’s especially important to look for consistency when you have strong feelings about the topic.

Honesty: It’s important to tell the truth—not just about what you say, but also in how you say it. If you aren’t true to yourself, the tone may become contrived or off-message. It’s like hearing your sweater vest-wearing aunt Linda use the phrase “it’s lit.”

Empathy: Once you have your sentence or message written, read it aloud and try to imagine your reader’s reaction, or run it by a friend or colleague. External factors, like the recipient’s personal or job circumstances, will certainly have an impact—you can’t control that. But you can dictate how thoughtful you are about what you write. And that kind of empathy is powerful. 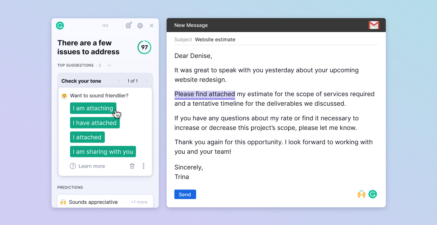 How Grammarly can help

Sometimes you intend for your writing to convey a certain tone, but your word choice might not match. Grammarly’s tone detector analyzes your writing for tone and flags when it might not come across as intended. What’s more, our tone suggestions provide options for how to better reflect your intended tone in your writing. For example, if you’re aiming to write a neutral response to a difficult work exchange and your writing might include some unintentionally harsh language, our suggestions will redirect you to soften your wording so that you don’t offend your reader.