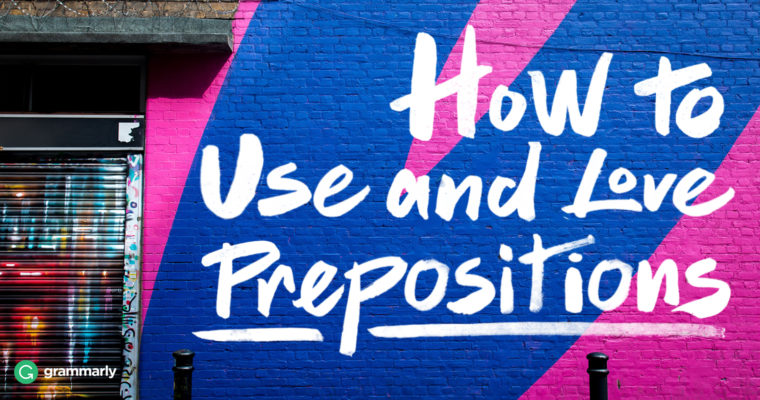 Confused about prepositions?
Grammarly provides suggestions, wherever you write.
Write with Grammarly

What Is a Preposition?

Thank goodness for prepositions. Imagine not knowing where the danger lay….

Prepositions tell us where or when something is in relation to something else. When monsters are approaching, it’s good to have these special words to tell us where those monsters are. Are they behind us or in front of us? Will they be arriving in three seconds or at midnight?

Prepositions often tell us where one noun is in relation to another (e.g., The coffee is on the table beside you). But they can also indicate more abstract ideas, such as purpose or contrast (e.g., We went for a walk despite the rain).

Here’s a tip: Want to make sure your writing always looks great? Grammarly can save you from misspellings, grammatical and punctuation mistakes, and other writing issues.

Prepositions indicate direction, time, location, and spatial relationships, as well as other abstract types of relationships.

Direction: Look to the left and you’ll see our destination.

Time: We’ve been working since this morning.

Location: We saw a movie at the theater.

Space: The dog hid under the table.

Unfortunately, there’s no reliable formula for determining which preposition to use with a particular combination of words. The best way to learn which prepositions go with which words is to read as much high-quality writing as you can and pay attention to which combinations sound right. Here are a few examples of the most common prepositions used in sentences.

I should rewrite the introduction of my essay.
Sam left his jacket in the car.
Did you send that letter to your mother?
We’re cooking for ten guests tonight.
Dan ate lunch with his boss.

You can also use tools like Google Ngrams to see which prepositions most commonly occur with particular words—but remember, this tool can’t explain the difference in meaning between different prepositional phrases like “pay for” (to purchase) and “pay off” (to bribe). For that, you may want to refer to a list of prepositions that includes the meanings of common combinations.

Ending a Sentence With a Preposition

That said, it is sometimes more elegant to move a preposition to an earlier spot in a sentence, especially in very serious and formal writing. But if you do move the preposition, remember to delete it from the end.

One of the most common preposition mistakes is adding an unnecessary at to the end of a question.

Where is your brother at ?

Although this is common in some English dialects, it’s considered an error in writing. You can fix the problem by simply deleting the at.

Where is your brother?

For many people, the reality of an entry into a new area of employment is cause for a host of anxieties.

Getting rid of the prepositions forces you to tighten up the sentence. The result is shorter, more direct, and easier to understand:

Alex hit the baseball up over the fence.

Get rid of the up. You don’t need it:

Alex hit the baseball over the fence.
Your writing, at its best.
Get Grammarly for free
Works on all your favorite websites