Is it “Preferably” or “Preferrably?” 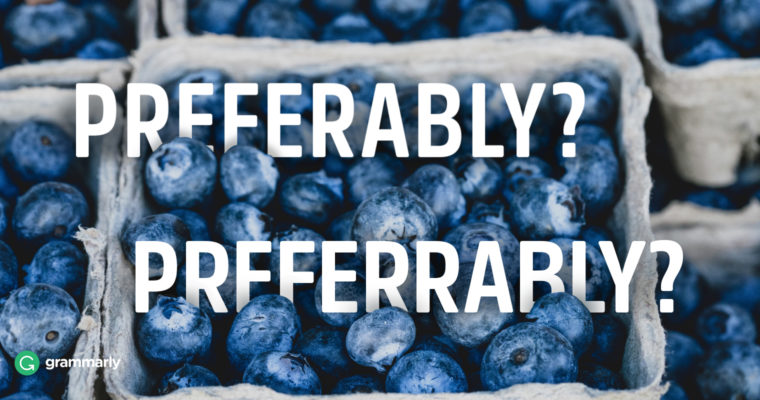 ​​There’s only one way you can spell the adverb preferably. You can’t add another f, r, or l—there’s really no need to do it.

Let’s be honest here—mistakes happen to the best of us. We’d have a hard time finding a writer who, at some point, didn’t miswrite “the” as “hte” or “teh.” In haste, it might also be possible to mistake “to” for “too,” or “their” for “they’re.” And that’s perfectly fine, as long as you go over your work, notice your mistakes, and fix them. To do that, you need to know the correct way of spelling words. That might mean getting some outside help in the form of a dictionary or spelling checker, but with a little patience and attention you can make your work look flawless. We’re not always aware that we’re making a mistake, however, and some mistakes tend to be more widespread than others. This is the case with preferrably, perhaps the single most common misspelling of the word preferably.

How to use the word preferably

They have fine-tuned their defence, determining Cedric Soares was an upgrade on Vierinha on the right and ruling Jose Fonte was preferable to Ricardo Carvalho, 38, in the centre.

And so for them it’s more preferable to go out and listen to something that they can dance to.

If you want to have your say next time, join a party—preferably one whose aims you believe in—and buy yourself an upgrade to Democracy Plus class.

So a self-aware product person—preferably one with a hunger to learn the other facets of marketing—is the right hire.

Why the double r, then?

Now that we’re positively sure that preferably is the correct spelling and that there’s no need to double any of the consonants or vowels, let’s try to figure out why doubling the “r” is such a popular mistake.

The root word of preferable, preferably, preference and a couple of other words is prefer. It has its roots in the Middle English word preferren, and it can be traced all the way to the Latin praeferre, which means “to put before.” That’s how we use it today, as a verb that usually means to like something more than other things:

However, over half of those who research online prefer to make their actual purchases in a brick-and-mortar store, according to a report from Pragma Consulting cited by Forbes.

But then again, using the same verb, you could get this:

He has repeatedly said he won’t play for another European club, preferring instead to see out his years at Barcelona before finishing his career back in Argentina, but the change in circumstances could persuade him to think otherwise.

So there are some words based on prefer that feature the double r, and they may be a cause of the confusion over preferrably. However, there’s a good reason that the r in preferred is doubled—when you add the suffixes -ed or -ing to words multisyllabic words and the stress is on the last syllable, the final letter of the word is doubled. In prefer, the stress is on the last syllable—pre-FER, which is why we add another r for preferred and preferring. Still, there’s no such rule about the suffixes -able and -ably, so we don’t have to double the r.