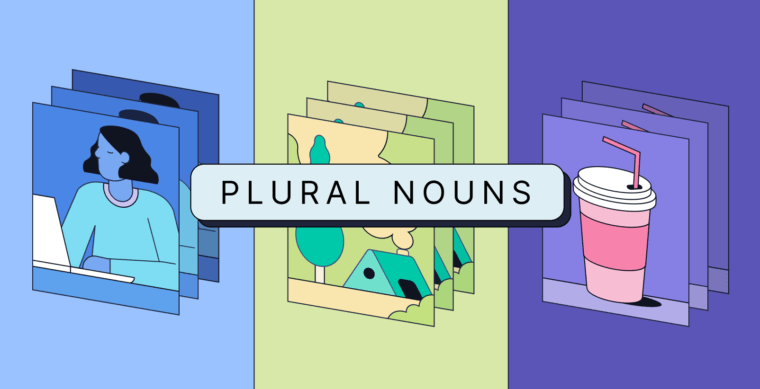 A plural noun is a noun that refers to more than one person, place, thing, or idea. Most singular nouns are made plural by adding a suffix, usually –s or –es. For example, the singular noun dog takes the plural form dogs, as in three dogs. However, there are irregular plural nouns that take unique forms.

Most singular nouns are made plural by simply putting an –s at the end. There are many different rules regarding pluralization depending on what letter a noun ends in. Irregular nouns do not follow plural noun rules, so they must be memorized or looked up in the dictionary.

What are plural nouns?

A noun is plural when it represents two or more people, places, things, or ideas. You can identify most plural nouns because they end in –s or –es, although there are plenty of exceptions. In particular, irregular plural nouns each have their own special plural forms, such as child and its plural form, children.

English distinguishes grammatical nouns as either singular or plural. Singular nouns represent one of something.

Plural nouns, on the other hand, represent two or more of something.

You can tell the difference between most singular and plural nouns by how the word ends, except for irregular nouns.

Possessive nouns are nouns that show ownership, usually with an –’s at the end. So if you had a friend named Marja and Marja owned a bike, you would write:

How do plural nouns work?

To make a regular noun plural, you add –s or –es to the end, depending on the word’s ending. Sometimes, letters of the original word get changed to make the plural form, such as half and its plural form, halves. We explain which words get which suffixes in the next section.

Most nouns can be turned into plural nouns, including collective nouns that represent groups.

However, mass nouns, also known as uncountable nouns or non-count nouns, like sand, don’t have plural forms, even when they represent multiple things.

There are many plural noun rules, and because we use nouns so frequently when writing, it’s important to know all of them! The correct spelling of plurals usually depends on what letter the singular noun ends in.

1 To make regular nouns plural, add –s to the end.

3 In some cases, singular nouns ending in –s or –z require that you double the –s or –z prior to adding the –es for pluralization.

4 If the noun ends with –f or –fe, the f or –fe are often changed to –ve before adding the –s to form the plural version.

5 If a singular noun ends in –y and the letter before the –y is a consonant, change the ending to –ies to make the noun plural.

6 If the singular noun ends in –y and the letter before the –y is a vowel, simply add an –s to make it plural.

7 If the singular noun ends in –o, add –es to make it plural.

With the unique word volcano, you can apply the standard pluralization for words that end in –o or not. It’s your choice! Both of the following are correct:

8 If the singular noun ends in –us, the plural ending is frequently –i.

9 If the singular noun ends in –is, the plural ending is –es.

10 If the singular noun ends in –on, the plural ending is –a.

11 Some nouns don’t change at all when they’re pluralized.

You need to see these nouns in context to identify them as singular or plural. Consider the following sentence:

Mark caught one fish, but I caught three fish.

However, when it comes to fish, things can get a little complicated.

Irregular nouns follow no specific rules, so it’s best to memorize these or look up the proper pluralization in the dictionary.

What is a plural noun?

A plural noun is the form of a noun used to show there is more than one person, place, thing, or idea. Most nouns simply add –s or –es to the end to become plural.

What is an example of a plural noun?

What is the difference between singular and plural nouns?