Finish this sentence: Everything is going to be. . .

If you’re like most people, the first word you thought of was okay—or was it OK? Is there a difference? Is OK simply a shortened version of okay? Is it informal? If you want to make sure your answer is the correct one, you will have to get the answers to those questions.

Is there a difference between okay and OK?

No. The meaning and usage are the same. The extremely versatile okay and OK can express agreement, change the topic, check for understanding, and verify that things are all right. 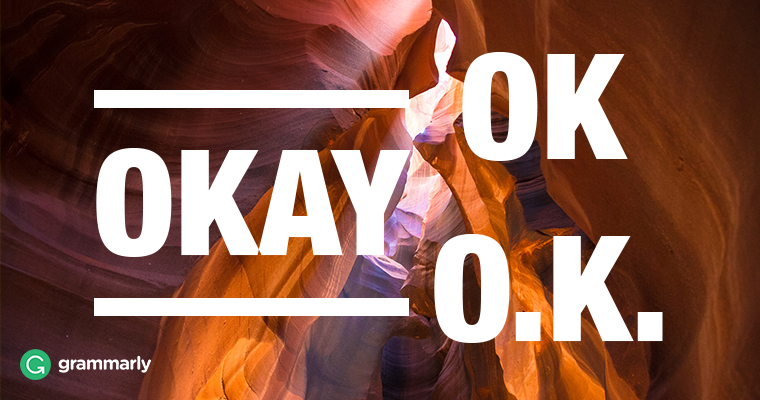 Is OK just an truncated form of okay?

Quite the opposite. It’s actually okay that derives from OK. The exact genesis of OK is unclear, but one popular theory contends that in the nineteenth century, people began spelling “all correct” phonetically (“oll korrect” or “orl korrect”) as a bit of a laugh. Later, they shortened it to the initials OK. Around the same time, President Martin Van Buren, nicknamed “Old Kinderhook” because he was from Kinderhook, New York, was running for reelection. What a great coincidence! “Vote for OK” became his campaign slogan. Even though Old Kinderhook lost the election in 1840, OK remained popular and spread abroad. According to the Oxford English Dictionary, the okay spelling emerged after a few decades.

Is it always okay to use OK?

Some style guides favor one over the other. Others are silent on the topic. For example, the Chicago Manual of Style (CMOS) does not specify which term it prefers. However, within its own text it uses OK. In response to a question posed on their website, CMOS states that okay “is an equal variant (also standard).” In contrast, the Associated Press Stylebook requires OK, even in words like OK’ing (apostrophe and all).

Is one form more formal than the other?

No, the terms are the same. You might decide that both are too informal if you are preparing a professional document. If that’s the case, opt for a more formal synonym. Remember, OK can be a noun, verb, adverb, or adjective. Take a look at some examples:

“Maybe ‘Okay’ will be our ‘always’…” ―John Green, The Fault in Our Stars

Okay and OK are two acceptable spellings of the same word. In formal writing, follow the requirements of your style guide.

You have the answers to the questions. There’s no difference between OK and okay. The older term, OK, (possibly) derived from an abbreviation for an intentional misspelling of “all correct.” The terms are both standard English. For extremely formal writing, always consult the relevant style guide. If you don’t have one, you may decide to use a synonym. OK! What are you waiting for? You have a sentence to complete!