Learn About Homonyms, With Examples 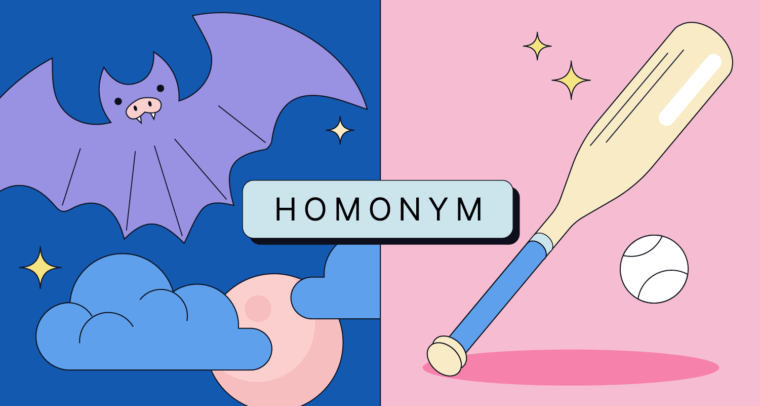 The English language loves to recycle its words. A bat is both a flying mammal and a smooth wooden club used to hit baseballs. Park can mean “a grassy expanse” or “a way to position a car.” And rock is both a mineral and a music genre. All of these words are homonyms, words with the same spelling or pronunciation but with different meanings. While homonyms occasionally cause confusion, they can also make writing more rhythmic or playful. With homonyms, you can write the sentence:

I could barely bear to watch the bear bare its teeth.

. . . and it will make perfect grammatical sense.

What is a homonym?

The definition of a homonym is “one of two or more words spelled and pronounced alike but different in meaning.” Just to confuse things a little more, homonyms can be broken down into two categories: homophones and homographs.

The name comes from the Greek homōnymon (the neuter of homōnymos), which means “having the same name.” The Greek prefix homo- means “same,” while the suffix –nym means “name.” Understanding these roots also gives us insight into the subcategories homophone (homo means “same”; phone means “voice or sound”), and homograph (graph from grapho, which means “write”). More on those differences next.

What are the differences between homonyms, homophones, and homographs?

Homonyms, homophones, and homographs, oh my! The three terms are closely related but don’t mean the same thing (are you beginning to see a pattern here?).

Homonym is the umbrella term for words with any combination of the same spelling or sound but with different meanings. Whether a word is a homophone, homograph, or both, it is always a homonym. That one’s easy.

These are words that sound the same but have different meanings. For example, the most common homophones taught in school are: there/their/they’re and to/too/two. These sets of words have the same pronunciation but different meanings and uses. Other examples of homophones are: rows/rose, one/won, and build/billed.

Homographs are words that are spelled the same but have different meanings.

Some words have the same spelling and pronunciation, like the word bear. Bear as a verb means “to carry,” while bear as a noun means “a furry, lumbering mammal.” Words like this can be considered both homophones and homographs—at which point, it’s probably easier to just call them homonyms.

How to use homonyms in writing

Be clear about context: Homonyms rely on context to make sense. It’s unlikely that a reader will be unclear about the meaning of the word spring if you’ve just described the pleasant temperature and the first few flowers starting to bloom. But if the scene is about jumping on a trampoline during this delightful shoulder season, then the use of spring might need some clarification. Use context to clarify confusing words for your reader.

Use homonyms playfully: Writers can harness the fun of homonyms to create wordplay and puns. Alice’s Adventures in Wonderland, by Lewis Carroll, is full of purposely misunderstood homonyms. In fact, homonyms make up the majority of the story’s humor. Homonyms also make great double entendres, which is the deliberate use of a word with multiple meanings.

Don’t forget the apostrophe: Many commonly used contractions are homonyms. They’re, you’re, and it’s are homonyms of their, your, and its. If you understand the rules of apostrophes, then you don’t have to worry about using the wrong word. A similar thing happens with possessive words, which become homonyms with their plurals. For example, cats means “multiple felines,” while cat’s means “something that belongs to a single cat.”

Homonyms can be confusing, especially when you’re just getting started writing. If you’re unsure about which word fits, you can always check with Grammarly!

Mercutio: Nay, gentle Romeo, we must have you dance.

Romeo: Not I, believe me. You have dancing shoes. With nimble soles; I have a soul of lead. So stakes me to the ground I cannot move . . .

I always told you, Gwendolen, my name was Ernest, didn’t I? Well, it is Ernest after all. I mean it naturally is Ernest.

On the contrary, Aunt Augusta, I’ve now realized for the first time in my life the vital Importance of Being Earnest [. . . ]

—The Importance of Being Earnest, Oscar Wilde

“I beg your pardon,” said Alice very humbly: “you had got to the fifth bend, I think?”

“I had not!” cried the Mouse, sharply and very angrily.

“A knot!” said Alice, always ready to make herself useful, and looking anxiously about her. “Oh, do let me help to undo it!”

Inside, the blinds were drawn, but the furniture was real.

Ask for me tomorrow, and you will find me a grave man.

What is a homonym?

A homonym is a word in a set of words that are spelled or sound the same but have different meanings.

What’s the difference between homonyms, homographs, and homophones?

What are some examples of homonyms?