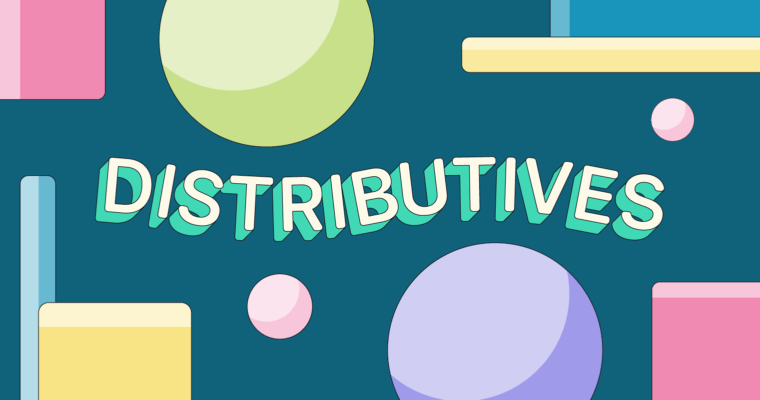 Distributives are words used to discuss the parts of a group in relation to the whole group. For example, if you’re discussing a class of students, you could use distributives like each, all, or half to talk about each student, all students, or half the students. The most common English distributives are all, both, each, either, every, half, and neither.

Distributives each have their own unique set of rules, which can get confusing. So below, we explain how to use each, with plenty of distributive examples so you can see how they work. But first, let’s take a deeper look at the question: What are distributives?

Distributives are a group of words in English grammar that discuss the divisions of a group. For example, if you want to talk about the specific members of a group rather than the entire group, you can use distributives like each or every to show that you’re talking about the individuals.

Distributives can be pronouns or determiners. Determiners are words that go before nouns to clarify what the noun is referring to. While the same word is sometimes used for both, the usage rules and sentence structure change depending on whether they’re used as a pronoun or determiner.

Distributive determiners modify nouns, including compound nouns and proper nouns. However, there are some special rules for when you can use them with singular nouns or plural nouns, which we explain below.

The nine commonly agreed upon distributives are:

How to use English distributives

Distributives play an essential role not just in writing but in all communication. If you’re not sure how to use them, review the rules below so you can speak with confidence!

Both, neither, and either

The distributives both, neither, and either are used to refer to pairs. They can be used only for groups of two—no more, no less.

For starters, all three can be used on their own as a pronoun.

Separately, both refers to the whole pair—the entire group of two. As a determiner it comes before a noun and can be used with:

Because both refers to more than one thing, it can be used only with plural nouns.

Both movies are sold out.

Both the movies are sold out.

Both these movies are sold out.

Both our movies are sold out.

As a pronoun, it can be used with the preposition of. This construction requires the article the, a plural demonstrative, or a possessive noun.

Both of the movies are sold out.

Both of those movies are sold out.

Both of our movies are sold out.

If the noun it modifies is a pronoun, the preposition of is required without additional words.

Both of us are too tired to walk.

Because either and neither represent only one part of a pair, they’re used only with singular nouns.

I’m fine with either option.

However, you can use them with the preposition of to refer to both items in the pair. In this case you use a plural noun preceded by the article the, a plural demonstrative, or a possessive noun.

I’m fine with either of these options.

Both, either, and neither are all correlative conjunctions, words that connect other words or phrases in a sentence. With this usage, they work with a partner word: both/and, either/or, and neither/nor.

Any, each, and every

There’s a new episode each week.

Every doctor must take the Hippocratic Oath.

Do you have any money?

You can combine any or each (but not every) with the preposition of to use it with the plural noun of the group it describes. If so, you also need the article the, a plural demonstrative, or a possessive noun.

Any of these posters would look good in our bedroom.

Each of the restaurants has its own charm.

Feel free to play any of my games.

Once again, if you’re using a distributive with a pronoun, you need the preposition of.

All and none both refer to a whole group: all refers to the total number of parts, while none refers to no parts in relation to the whole.

Both all and none can be used as pronouns. You can specify the group they’re referring to with a plural noun and the preposition of, together with the article the, a plural demonstrative, or a possessive noun.

None of those numbers are on my lottery ticket.

I bought all of the chips at the bodega.

All of Julie’s songs are about the same ex-boyfriend.

We welcome all people here.

She has so much energy all the time.

All Sancho’s shirts are blue.

What do we do with all this trash?

The distributive half has the same meaning as the fraction, which is to say fifty percent.

As a determiner, half can be combined with singular nouns, plural nouns, and mass nouns, but you must also use an article (such as a or an), a singular or plural demonstrative, or a possessive noun.

She was asleep for half the movie.

Was the night out worth half your paycheck?

Don’t forget half that reward is mine.

Half can also be used on its own as a pronoun.

I can’t eat a whole slice, so just give me half.

Like the other distributives, half can also be used with the preposition of. This is necessary when using it with a pronoun.

Half of them have never even played baseball before.

Additionally, half can be used with measurements, such as meters, pints, or minutes. In this construction, the measurement is always a singular noun with an indefinite article (a or an).

I need half an hour to get ready.

His car broke down half a mile from home.

Distributives are words used to discuss the parts of a group in relation to the whole group, such as all the class or every member of the club.

How are distributives used?

What are some examples of distributives?

The most common distributives include all, both, each, either, every, half, and neither.