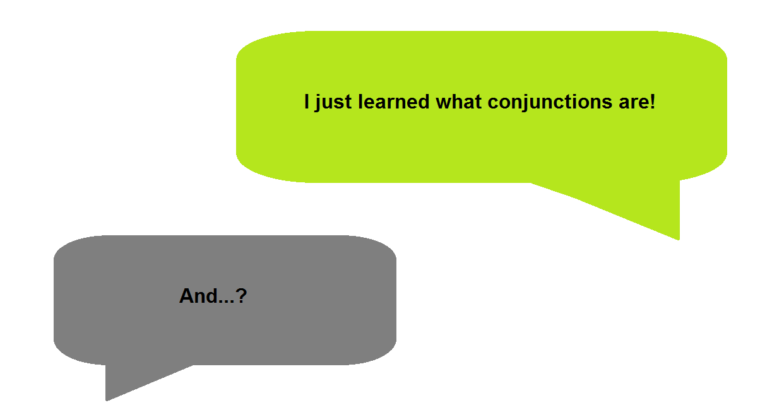 Without conjunctions, you’d be forced to express every complex idea in a series of short, simplistic sentences: I like cooking. I like eating. I don’t like washing dishes afterward.

Conjunctions are words that link other words, phrases, or clauses together.

I like cooking and eating, but I don’t like washing dishes afterward. Sophie is clearly exhausted, yet she insists on dancing till dawn.

Conjunctions allow you to form complex, elegant sentences and avoid the choppiness of multiple short sentences. Make sure that the phrases joined by conjunctions are parallel (share the same structure).

I’d like pizza or a salad for lunch. We needed a place to concentrate, so we packed up our things and went to the library. Jesse didn’t have much money, but she got by.

Notice the use of the comma when a coordinating conjunction is joining two independent clauses.

Correlative conjunctions are pairs of conjunctions that work together. Some examples are either/or, neither/nor, and not only/but also.

I can stay out until the clock strikes twelve.

Before he leaves, make sure his room is clean.

Starting a Sentence with a Conjunction

Have a safe trip. And don’t forget to call when you get home. Gertie flung open the door. But there was no one on the other side.

after, although, as, as if, as long as, as much as, as soon as, as though, because, before, by the time, even if, even though, if, in order that, in case, in the event that, lest , now that, once, only, only if, provided that, since, so, supposing, that, than, though, till, unless, until, when, whenever, where, whereas, wherever, whether or not, while