Affective vs. Effective: What’s the Difference? 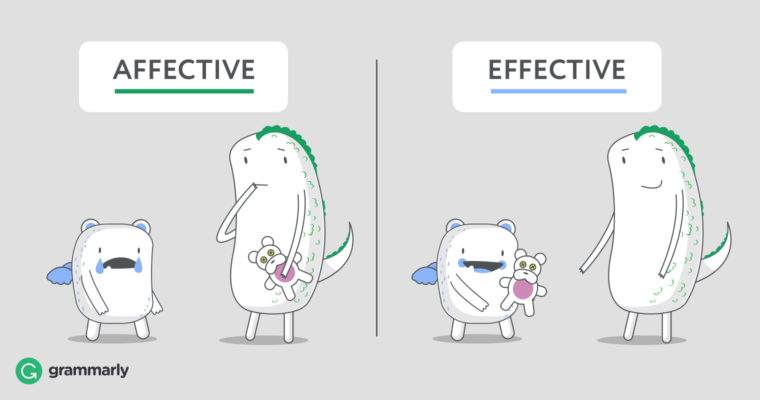 Affective is usually used in the field of psychology and addresses emotions and feelings. Effective is common in everyday language to describe something that produces a desired result.

Here’s a tip: Want to make sure your writing shines? Grammarly can check your spelling and save you from grammar and punctuation mistakes. It even proofreads your text, so your work is extra polished wherever you write.
Your writing, at its best
Grammarly helps you communicate confidently

The difference between affective and effective

Affective and effective are adjectives with no boundary issues, at least not with each other. There’ll be none of that nonsense “affect” and “effect” like to pull off, so let’s dive into what makes the two adjectives so different from each other.

Affective is an adjective formed from the noun affect, which appears quite frequently in psychology-related writing. Imagine that you’re looking at someone who is experiencing a strong emotion—every manifestation of that emotion you can observe is an affect. At least, that’s the easiest way to understand it.

When you want to say that something you’re doing is causing results, you can say that it’s effective. Specifically, something is effective when it produces the results you want. And that’s a very appropriate way to define effective, because we get the adjective from the noun effect—a result. It’s not too hard to remember the difference between affective and effective. You just have to use a small upside-down mnemonic device—when it comes to affective and effective, a is for emotion, and e is for action.

One reason it’s sometimes easy to mix up the meaning of the adjective affective is that the noun it’s derived from, affect, is spelled the same as the verb affect, but the two have very different meanings.

While affect the noun, as we already explained, relates to the emotions we experience, affect the verb means to cause an effect, or to influence.

Examples of affective and effective in sentences

Doctors also report they have patients who seem to experience a summer version of seasonal affective disorder.

Only humans were thought to have this ability of affective forecasting, in which prior experiences are used to conjure up mental pictures about totally new situations.

Educators are always on the look-out for ways to make their teaching more effective, and it seems the secret to effective learning may be less study not more.

Twitter’s rights to the MLB and NHL games are effective immediately.