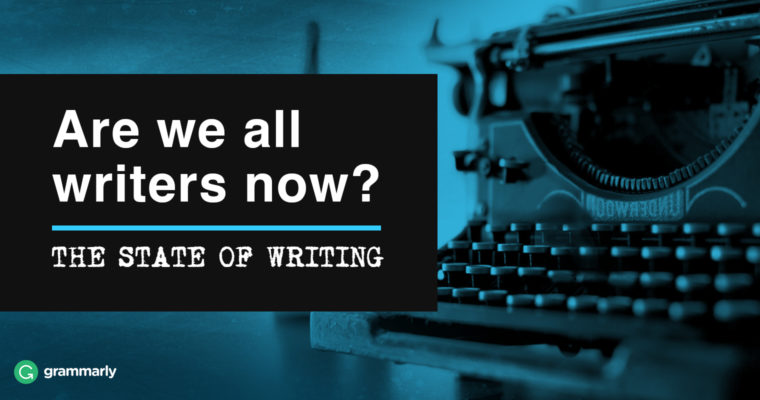 Whether you realize it or not, you’re a writer.

It’s hard not to be one in the information age, when writing is essential, if not inescapable. Maybe you’re keeping up with old friends and upcoming assignments. Or perhaps you’re trying to impress a hiring committee or a hot date. We’re constantly dashing off notes and status updates with a regularity that would’ve been the envy of anyone in the era of telegrams and typewriters, let alone the cloistered monks who hand-copied ancient scrolls by candlelight.

It’s easier than ever to hammer out reams of words on all manner of gadgets that can go just about anywhere. The act of writing is hardly confined to the monastery, er, office; we do it in coffee shops, on the train, and in bed. We send text messages and respond to emails when we’re half asleep, when we’re getting a ride home, or maybe having just stepped out of the shower.

At Grammarly, we help legions of writers just like you get their ideas down clearly and in ways that will help them look sharp. We also learn a lot about what writers are like – from what programs they use to what time of day their prose usually comes out looking its best. After proofreading and analyzing more than a billion words, here are a few of the patterns we’ve found particularly interesting about how you tend to write:

1 The average writer cranks out roughly a thousand words per week.

Among U.S. Grammarly users, the weekly average is 980 words, to be precise. Multiply that by 52 weeks, and you’re mashing out 50,960 words each year. That’s about equivalent to a light summer novel – enough of a read to last through several lazy days at the beach, at least.

2 That’s mostly in emails, according to user data, along with programs like Microsoft Word – but plenty of writing also happens online in social media and blogs.

Hundreds of thousands of new statuses and comments appear on Facebook every. single. minute. (Rules of punctuation trampled here for emphasis.) This is to say nothing of the perhaps dozens of text messages you might send back and forth each day. Frequent texters can crank out thousands of words per month, just in their preferred messaging app.

3 Most of the mistakes you make in emails are misspelled words.

Users averaged around a dozen mistakes per every hundred words – and more than half of those were spelling errors.

4 You’re especially prone to making gaffes on social media – nearly three times as likely as anywhere else you write.

This may not surprise you, as such platforms tend to be more casual and invite lots of slang and abbreviations, tbh. Here, we found an average of close to 40 mistakes in every hundred typed words.

5 What time of day you write has a clear impact on how often you make mistakes.

We found a decided difference between the patterns of early birds, who write from 4 to 8 a.m., and night owls, who work from 10 p.m. to 2 a.m. As you might guess, one seems clear-headed and fresh, while the other is a bit more more muddled. Indeed:

6 You tend to do your best writing early in the morning – before 8 a.m.

7 Those writing for blogs make the fewest mistakes after lunch, between 1 and 5 p.m. Even so, early birds still outperformed night owls, with the 4 to 8 a.m. crowd averaging 5.6 mistakes per 100 words, compared to the night owls’ 9.1.

8 Still, good writing can happen at any time.

It’s worth noting there is some evidence that staying up late to work may be an evolutionarily advantageous behavior associated with high intelligence – even if folks who do it need to be extra mindful of their writing.

9 Apostrophe mistakes were the most common source of errors.

A common example is let’s vs. lets. The former is a contraction of “let us,” while the latter means “allows,” as in “this lets us avoid similar errors.” (Of course, you can always brush up on sound apostrophe usage right here.)

10 Too vs. To was next down the list, followed by Everyday vs. Every Day

Rounding out the most common mistakes were such mix-ups as than vs. then, there vs. their, and of vs. off. As ever, you can find tips on our blog – answers to such questions and more are right there.

As we wrap up, there’s one more fun observation we’d like to share about writers online, which applies more broadly, not just to folks using Grammarly:

11 Bonus – Writers on the web may be using more and more languages, not just English.

English enjoyed something of a head start among early Internet users and was once regarded as the default language of the web. As the British linguist David Graddol wrote two decades ago in his paper “The Future of English?”:

The system has its origins in the academic and, in particular, scientific community, which is the longest connected community of all. English is deeply established among scientists as the international lingua franca and, from this beginning, English appears to have extended its domain of use to become the preferred lingua franca for the many new kinds of user who have come online in the 1990s…

In a reflection that looks increasingly prescient, Graddol goes on to note that at the time, some 90 percent of the computers online were connected through English-speaking countries, suggesting that in the years since, as the technology has grown ever more global, it’s gotten easier and easier to communicate in other languages.

Indeed, some estimate that now just over half of all content on the web is in English, but it’s not easy to track precisely; other experts believe it’s below 40 percent. Notably, in China, hundreds of millions of users blog and post updates in Chinese to social media sites like Renren and Sina Weibo.

Whatever your preferred language, platform, or time of day to work, it’s always worth a second look to make sure your writing is radiant and clear.