Who’s is a contraction linking the words who is or who has, and whose is the possessive form of who. They may sound the same, but spelling them correctly can be tricky. To get into the difference between who’s and whose, read on.

Here’s a tip: Want to make sure your writing always looks great? Grammarly can save you from misspellings, grammatical and punctuation mistakes, and other writing issues on all your favorite websites.
But, when you need “whom” to explain what “whose” means, more information is needed. Plus, even though who’s is a contraction and whose is possessive, put them together and you sound like an owl starting to fall asleep. That’s because these two words are homophones, meaning they sound the same, but mean different things. Keep your apostrophes where they belong by continuing through this explanation of who’s vs. whose.

First up, let’s introduce this exceptionally tricky pronoun. It has many forms, and many a brave soul has cowered in the attempt to use it correctly.

Who is a subject pronoun, like he, she, I, or they, but it’s the interrogative used for animate subjects. In other words, use it to ask a question about which person did something or is someone.

This is the bane of many an English-speaker’s existence. But it’s not as hard as you think: whom is an object pronoun, meaning if you could replace it with “him,” “her,” “me,” or “them,” you’re good to go.

“Whom are you referencing?” “Whom did you ask to go to the dance?” “To whom are you speaking?”

Yeah, we know—it sounds stuffy. But if you want to be correct correct, that’s how it works.

And now, on to the spelling culprits. 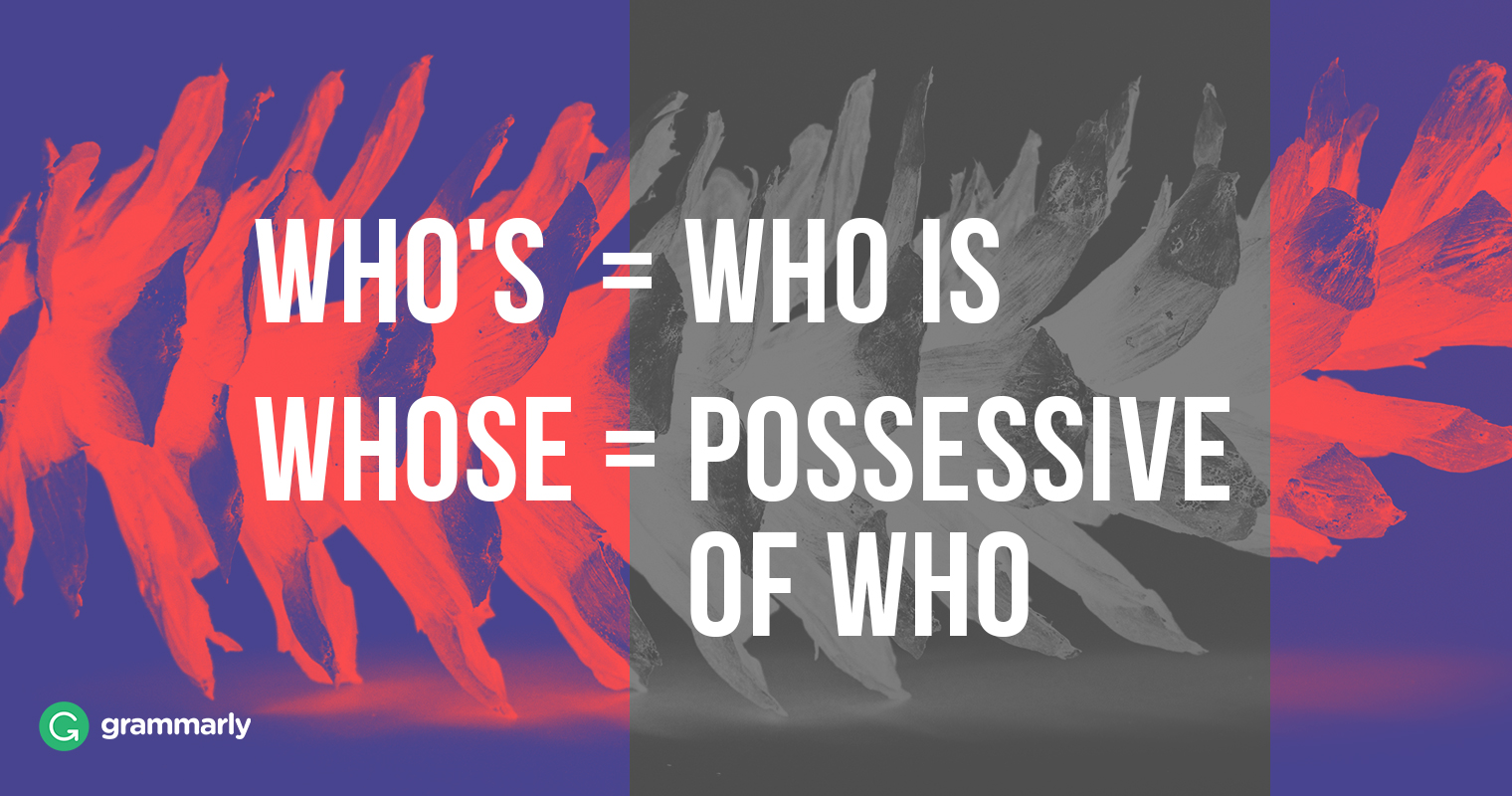 They sound the same: hoos. It rhymes with shoes.

So: is it who’s shoes? Or whose shoes?

To recap, “who” is the pronoun used to mean “what or which person or people.” Add the apostrophe and the s for these reasons:

Who’s is a contraction. That means the apostrophe stands in for a letter that goes missing to make pronunciation easier and quicker. Imagine saying “I do not know who is going to go.” Out loud, it’ll probably sound more like “I don’t know who’s gonna go.” The jury’s still out on gonna, but we’d guess you’ve already heard of using an apostrophe to mark an omitted word or sound. Wouldn’t y’all agree?

Whose shoes? Translation: to whom do the shoes belong?

Whose is a pronoun used in questions to ask who owns something or has something. In other words, whose is about possession.

Think of it this way:

Incidentally, Who’s shoes? would mean “Who is Shoes?” Some folks have strange nicknames. Like Blue. Whose clues? Blue’s clues.

Weirdly, the above sentence wouldn’t mean “Who has shoes?”—you’d probably say “Who’s got shoes?” if that’s the meaning you’re after.

Who’s Got Time for Examples?

Well, we hope you do. But whose time is it? Your time. We hope you’ll spend it looking at these examples of how to use who’s and whose.

If you have that tune stuck in your head the rest of the day, you can blame us.

Whose Line Is It Anyway?

Who’s against spicing up a grammar lesson with some ’90s comedy?

The People Behind the Tusks: A Who’s Who of the Cast of Warcraft

Consequently, their roles had to be filled by CIA officers whose identities had not been revealed to the Russians.

Bessie carried a lantern, whose light glanced on wet steps and gravel road sodden by a recent thaw.

This one’s worth an extra glance: “who” in all its forms generally refers to animate beings, but in the possessive there’s no equivalent for inanimate objects like Bessie’s lantern. The very awkward alternative is “Bessie carried a lantern, the light of which glanced on wet steps.” Not good.

And finally, a who’ve for good measure:

[They’re] Kids from wealthier districts, where winning is a huge honor, who’ve been trained their whole lives for this.

Yes, that means who have.

Who’s Clear on Who’s and Whose?

By now, anyone who has read this far, we hope. Just in case, let’s review:

Whose grammar got a boost from this read? Now you’re someone who’s ready to use these pronouns in style.