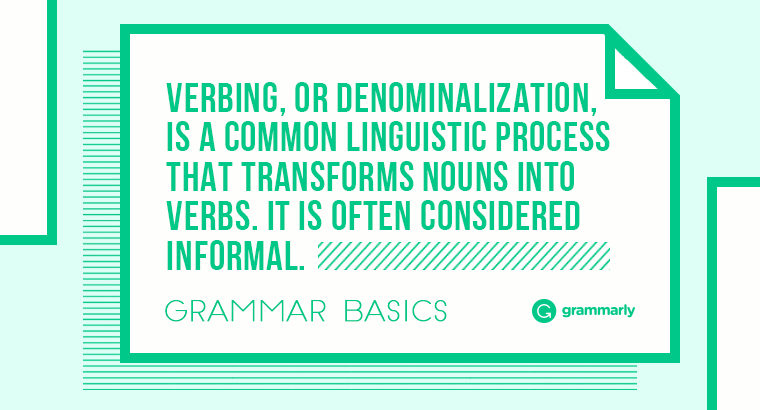 Have you ever friended someone on Facebook? Friend is a noun. Adding an –ed to the end to turn it into a verb is called verbing. Some nouns that people convert into verbs already have verb forms. For example, the verb befriend means to make friends with someone. However, social media made friending popular. Now, the dictionary defines the new verb as “to add a person to one’s list of social media contacts.” What else is there to know about verbing?

There are lots of ways to express the idea of turning a noun into a verb. The noun form of the act is verbification. Besides “to verb,” you might see “to verbify.”

Did you know that noun-to-verb conversions are abundant in English? People have been doing it for centuries. In fact, “verbify” is itself an example of the phenomenon. Nouns from all aspects of life are verbified:

Let’s table the proposal until we get more information.
I plated the asparagus next to the sweet potatoes to highlight the contrasting colors.
The flight has not yet deplaned.
The computer program is taking forever to download.

Before the first day of class, she googled her professor.
I had to xerox a hundred copies of my résumé.
When is the last time you skyped your relatives?

Some verbs, like to google and to xerox, become so common that they are included in lowercase form in dictionaries.

How do you feel about new verbs? Some are fads, but others might stand the test of time. If you’d like to try making some verbs yourself, social media is a great place to test your creations. If someone objects, you can always unfriend them!