To vs. For: What’s the Difference? 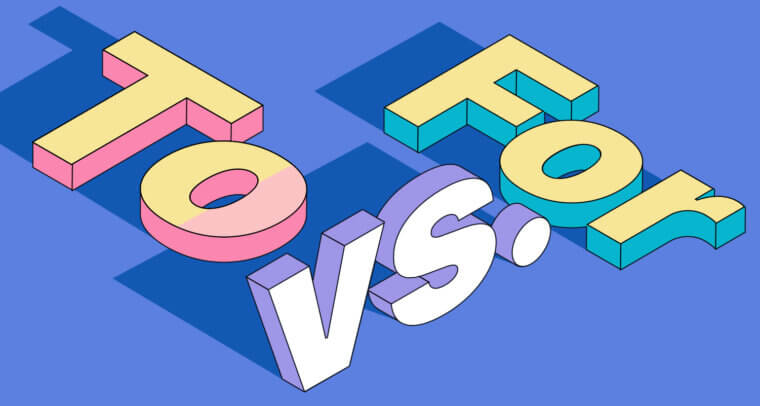 To and for are some of the most common prepositions in English—you see them everywhere, in almost every sentence. That’s what makes it so frustrating to get them mixed up; after all, the for and to difference isn’t exactly easy to understand.

Even people who use English as their primary language sometimes get confused about to vs. for, so we wanted to clear things up once and for all. Below we explain the difference between to and for, including when to use each, common mistakes, and plenty of examples.

What is the general difference between to and for?

To and for are similar, so it’s easy to get them confused. Both to and for are prepositions, one of the eight parts of speech, and both are used quite a lot. The difference between to and for lies in their meanings and the words they’re typically used with.

We explain those meanings in the next sections, but for now let’s talk about the differences between for and to. For example, to is one of the prepositions of direction, which means it can be used to express movement, whereas for is not (except in rare cases, where one could say “I think we’re headed for a dead end,” for example). Additionally, to can indicate the infinitive form of verbs, which for cannot.

Likewise, for has its own unique uses that to doesn’t have. For can sometimes act as a coordinating conjunction, meaning it can connect two clauses in a sentence, something to cannot do.

Aside from their usage as prepositions and special grammar situations like infinitives and conjunctions, both to and for are also used as parts of phrasal verbs. When used in phrasal verbs, however, they no longer act independently and instead take on the meaning of that particular phrasal verb.

When to use to

When do you use to in a sentence? Here are the main uses of the preposition to:

Expressing movement toward something

We’re going to the zoo this weekend.

Look to the left and right when crossing the street.

Showing who or what receives an action or item

Furlong passed the ball to Sexton at the last second.

We didn’t invite Karen because she was always mean to us.

I am married to my best friend.

This is Dwight, assistant to the regional manager.

The piece of paper was accidentally glued to my hand.

I chained my bike to a bench, but the bench was stolen.

Introducing the second part of a comparison

They preferred water to soda.

Describing why something happened, when the explanation uses a verb

He shouldn’t have joined the army to impress people.

I study so much to get good grades.

Other main uses of to

Infinitives—In the infinitive form of a verb, to comes before the root verb.

I want to be an astronaut.

To succeed in anything requires motivation.

Time—Especially in British English, to is used to mean “before” a certain time.

Synonym of “until”—To is often used colloquially as a replacement for “until.”

We’re open from dawn to dusk.

I’m with you to the end of the line, Bucky.

When to use for

When do you use for in a sentence? Here are the main uses of the preposition for:

Indicating agreement, allegiance, or favor toward something

I always root for the underdog at games.

If you’re not for the union, you’re against it!

Showing an action on behalf of or representing something else

I speak for everyone when I say that we’re happy you’re here.

I may work for Walmart, but I don’t shop there.

Introducing the second part of a purchase, deal, or trade

I’ll give you my potato chips for your mini-muffin.

He bought the entire Skrillex discography for only a dollar.

Indicating length of time or distance

She worked there for four years and the boss never learned her name.

Go straight for a few miles and then turn left.

Showing thanks or gratitude

Thank you for your email.

It isn’t much, but I’m grateful for what I have.

Describing why something happened, when the explanation uses a noun

She became a doctor for the money, not the long hours.

We have to practice extra for the tournament.

Other main uses of for

Conjunction—For is a coordinating conjunction that acts as a synonym of “because,” although today it’s a little outdated. (If you’ve learned the FANBOYS acronym, for is the F.)

Don’t go out past midnight, for it’s not safe.

The crops aren’t growing, for the weather is lousy.

Comparisons with what’s normal—You can use for to emphasize how something is different from the norm or general standard.

She’s tall for her age.

“You’re not bad for an elf,” said the dwarf.

Scheduling—For is used to indicate a planned arrangement in the future.

I have a dentist appointment scheduled for Tuesday.

Is our D&D session still on for later?

Common word pairings that use to and for

Certain words just go together, even when other words are technically correct too. When you’re familiar with a language, specific word pairings just sound “natural” because everyone seems to use them, but swapping one of those words with another doesn’t sound as good because the phrasing is less common. For example, we often say “save time,” but rarely use “conserve time,” even though both are correct and have the same meaning. These pairings are known as collocations.

For people whose primary language is not English, collocations can be difficult to remember, especially with prepositions. So below we’ve included a short list of the common words that usually pair with to and for. We’ve also included some popular phrasal verbs to help you understand which words use to and which words use for.

Word pairings that use to:

Common phrasal verbs with to:

Word pairings that use for

Common phrasal verbs with for:

Using to vs. for with purpose and reasons

Looking at the uses of to and for individually, you’ll notice there’s some overlap, particularly when it comes to reasons and explaining why. This topic alone creates a lot of the to vs. for confusion.

When it comes to purpose and reason, the simple difference between to and for is:

I came here to see you.

I came here for you.

It’s quite common to hear both “important to someone” and “important for someone.” While they’re both grammatically correct—and similar—their meanings have a slight difference that’s worth mentioning.

As an example, a job interview might be important for you as a way to make money and afford your lifestyle. However, if the interview is for your childhood dream job, then the job interview can also be important to you because it reflects a personal passion.

Using to vs. for with receiving something

Although to is more closely related to receiving something, people often mix it up with for. Because for indicates a reason that’s a noun—in this case, a person—it can get confusing.

Essentially, when you’re talking about someone receiving something directly, use to followed by the recipient (the person who receives something).

Every year I give a birthday gift to my dog.

If you’re talking about the reason or purpose behind doing something—but not the actual giving—use for.

I bought a birthday gift for my dog.

Notice how the action in the last sentence is about buying the gift, not giving the gift.

To vs. for FAQs

What is the difference between to and for when communicating the reason for or purpose of something?

What is the difference between to and for when communicating the recipient of something?

What is the difference between to and for when communicating the importance of something?