Than Vs. Then–What’s the Difference?

Shundalyn Allen
Updated on
May 7, 2019Grammar 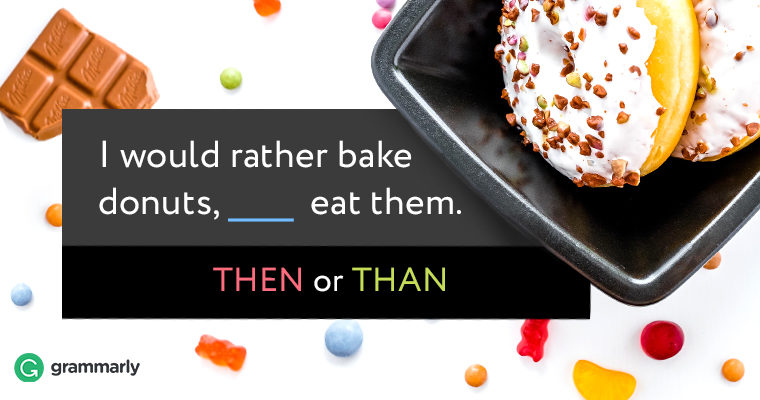 Two acquaintances who share many of the same features may be difficult to distinguish from one another. How can you tell them apart? One way is to get to know them better. Even identical twins have unique characteristics in their physical appearance and personality. A lot of people make errors with the nearly identical than/then pair, but you don’t have to be one of them. Just use the same strategy you use to tell one person from another—get to know them!

When to Use Than

A conjunction is a word that connects two clauses or coordinates words in the same clause. Than is a conjunction used to introduce the second part of an unequal comparison. It also introduces the rejected choice in expressions of preference. Finally, than can mean “except” or “when.”

Amanda is shorter than Annabelle is. She would rather die than wear high heels.

Than can also function as a preposition. A preposition connects a noun or pronoun to a verb or adjective in a sentence, usually to express a spatial or temporal relationship. As a preposition, than means “in relation to” or “by comparison with.” Here’s a (technically correct) construction you may not have seen before:

Annabelle is a friend than whom there is none more caring. 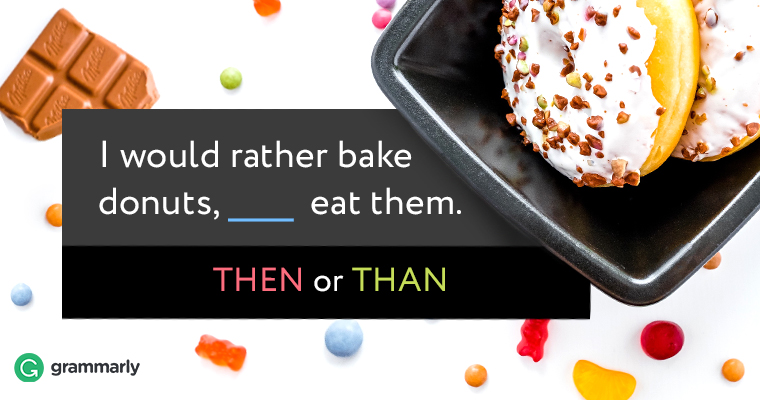 Than appears in a lot of idioms. Many of them, such as “more fun than a barrel of monkeys” or “more dead than alive,” feature comparisons. You’ve probably heard some of the most popular ones (e.g., “easier said than done,” “better late than never”) but many may be new to you. For example, have you heard of “more sinned against than sinning”? Wouldn’t it be a fun project to find out how these colorful expressions started?

When to Use Then

Then often functions as an adverb. Adverbs modify verbs, adjectives, or other adverbs. Dictionaries define then lots of different ways: in that case, at that time, next in order of place or time, at the same time, soon afterward, in addition, or as a consequence.

Standing next to Edwin is Ethan, then my roommate Claire, then me. Edwin told me, “If we are having fun together, then you should take lots of photographs.” There were no digital cameras then!

Sometimes, then is an adjective or a noun. As an adjective, or describing word, it means “being such, existing, or being at the time indicated.” As a noun, it means “that time.”

My then roommate Claire moved out and I have not seen her since then.

Then appears in some idioms too. One means “on the other hand”: Edwin is funny, but then I laugh at everything. Another idiom means “at that exact time and place, or at once”: Ethan asked me if I wanted to take a road trip, and I went home to pack my suitcase right then and there.