What Is Syntax? Learn the Meaning and Rules, With Examples 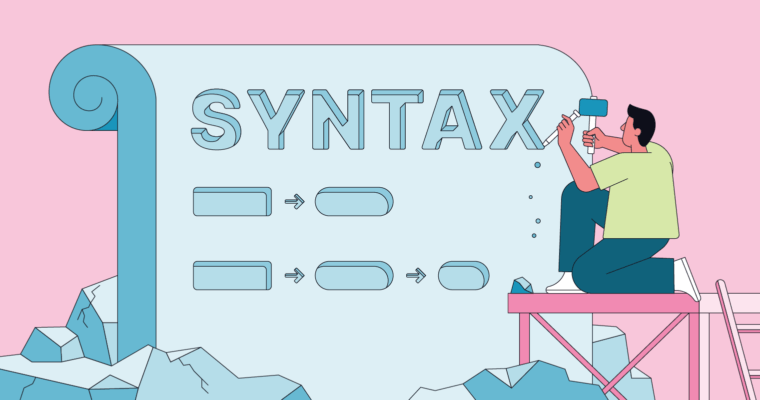 Syntax in English is the arrangement of words and phrases in a specific order. If you change the position of even one word, it’s possible to change the meaning of the entire sentence. All languages have specific rules about which words go where, and skilled writers can manipulate these rules to make sentences sound more poignant or poetic.

When it comes to language, syntax is an advanced topic, which can make it difficult to understand. In this guide, we discuss the basic rules and types of syntax so you can communicate effectively, including some syntax examples. First, let’s start with a more thorough syntax definition.

Give your writing extra polish
Grammarly helps you communicate clearly

What is syntax in linguistics?

Not to be confused with syntax in programming, syntax in linguistics refers to the arrangement of words and phrases. Syntax covers topics like word order and grammar rules, such as subject-verb agreement or the correct placement of direct and indirect objects.

Syntax is essential to understanding constituency, the term for multiple words acting as a single unit. In long and complex sentences, constituency is necessary to determine the hierarchy within the sentence, particularly with sentence diagramming.

Meaning: Batman is the only person who fights crime. No one except Batman fights crime, not even Superman.

The basic rules of syntax in English

If you want to get technical with the English language, there are dozens of rules about syntax you can study. However, these can get confusing, and some require an expert understanding of English, so below we list only the five basic rules of syntax in English, which are enough for constructing simple sentences correctly.

1 All sentences require a subject and a verb. However, imperative sentences (commands) do not need to include their subject because it’s assumed to be the person the sentence is directed at.

2 A single sentence should include one main idea. If a sentence includes two or more ideas, it’s best to break it up into multiple sentences.

3 The subject comes first, and the verb comes second. If the sentence has objects, they come third, after the verb.

5 Adjectives and adverbs go in front of the words they describe. If there are multiple adjectives describing the same noun, use the proper adjective order, known as the “Royal Order.”

Learning these fundamentals is the first step in understanding syntax. After that, you’ll be able to tackle more advanced topics, like the types of syntax.

Before we get into sentence structures, let’s discuss syntactic patterns. In English, syntactic patterns are the acceptable word orders within sentences and clauses. Depending on what kinds of words you want to use, such as indirect objects or prepositional phrases, there is a specific order in which to place them all.

We’ve already talked about subjects and verbs, as well as direct objects and indirect objects, on our blog, but before we get to the syntactic patterns, we first need to explain complements and adverbials.

Adverbials aren’t always complements, however. While adverbial complements are necessary for a sentence’s meaning, another kind of adverbial, modifier adverbials, can be removed without changing the meaning. Adverbials are usually composed of single adverbs (We ran quickly.), prepositional phrases (We ran in the park.), or noun phrases that relate to time (We ran this morning.).

Be careful not to confuse adverbials with adverbial clauses, which are more involved and include their own subjects and verbs.

Now let’s look at the seven types of syntactic patterns so you can make proper sentences and clauses with whatever words you want.

This is the standard syntactic pattern, including the minimum requirements of just a subject and verb. The subject always comes first.

The dog carried the ball.

The dog is playful.

The dog gave me the ball.

The dog made the ball dirty.

Object complements come after the direct object, similar to other complements.

The dog perked its ears up.

The syntactic patterns above can be used to form stand-alone sentences and individual clauses within a sentence. Both independent and subordinate clauses can be mixed and matched to form advanced sentences, which is ideal if you want to learn how to write better sentences.

There are only four types of sentence structures, which represent different combinations of independent and subordinate clauses.

1 Simple: Includes the minimum requirements for a sentence, with just a single independent clause.

We go to the beach in summer.

2 Complex: An independent clause combined with one or more subordinate clauses.

We go to the beach in summer when school is finished.

3 Compound: Two independent clauses joined by a coordinating conjunction or a semicolon.

We go to the beach in summer, but my cat stays home.

We go to the beach in summer, but my cat stays home because he doesn’t own a swimsuit.

We recommend using a variety of sentence structures to improve your paragraph structure. Using the same sentence structure over and over in a paragraph is technically acceptable, but it can be a little boring for the reader. For this reason, it’s a good idea to consider syntax early on, even when writing an outline.

What’s the difference between syntax and diction?

Syntax is often confused with another aspect of language called diction. While the two have some things in common, they are distinct concepts.

Diction refers to word choice. For example, you might describe a room as “clean,” or you might call it “spotless.” Both words have similar meanings, but with a tiny difference that can affect the reader’s understanding of that room.

Syntax, on the other hand, is about the arrangement or order of the words. There’s less choice involved, and there are more restrictions based on grammar rules.

Diction is a writing tool that directly affects writing style. For example, the author Mark Twain is famous for using simple, everyday words, while the author James Joyce is known for using longer, more sophisticated words.

However, because syntax has more grammar rules to follow, it tends to be more uniform among writers compared to diction.

In the hands of a skilled writer, syntax can make the difference between a bland sentence and a legendary quote. Combining syntax with certain literary devices, like antithesis, chiasmus, or paradox, can help anyone make their writing stand out. Just look at these famous syntax examples from literature.

In this famous passage, Dickens matches the syntax in multiple clauses to establish a connective comparison between events past, present, and future.

“Rather than love, than money, than fame, give me truth.”

The syntax in Thoreau’s excerpt may be peculiar, but it’s written this way to emphasize just how important truth is. Consider how the sentiment would have less impact if it were reversed: “Give me truth rather than love, than money, than fame.”

“People generally see what they look for, and hear what they listen for.”

—Harper Lee, To Kill a Mockingbird

One of the best applications of syntax for writers is parallelism, or using the same structure for different phrases. As this passage from Lee shows, parallelism allows for direct comparisons and also sounds poetic.

“The fool doth think he is wise, but the wise man knows himself to be a fool.”

Shakespeare here uses antithesis in his syntax to emphasize the difference between a wise man and a fool.

“I may not have gone where I intended to go, but I think I have ended up where I needed to be.”

—Douglas Adams, The Long, Dark Tea-Time of the Soul

As long as you deliberately choose which clauses come in what order, syntax can be used to subvert expectations and surprise readers with an unpredictable meaning.

What is syntax in linguistics?

In linguistics, syntax is the arrangement or order of words, determined by both the writer’s style and grammar rules.

How does syntax work?

Most languages have a predetermined order for the types of words in a sentence, but there is still enough freedom for creativity and the writer’s own unique style.

What are the different rules of syntax?

Syntax in English sets forth a specific order for grammatical elements like subjects, verbs, direct and indirect objects, etc. For example, if a sentence has a verb, direct object, and subject, the proper order is subject → verb → direct object.

What are the different types of syntax?

While there are specific rules for word order within a clause or sentence, the writer is still free to choose different types of syntax to order the words and clauses. For example, one could write a compound sentence containing two independent clauses or two simple sentences containing one independent clause each.