What Are Suffixes in English? Definition and Examples 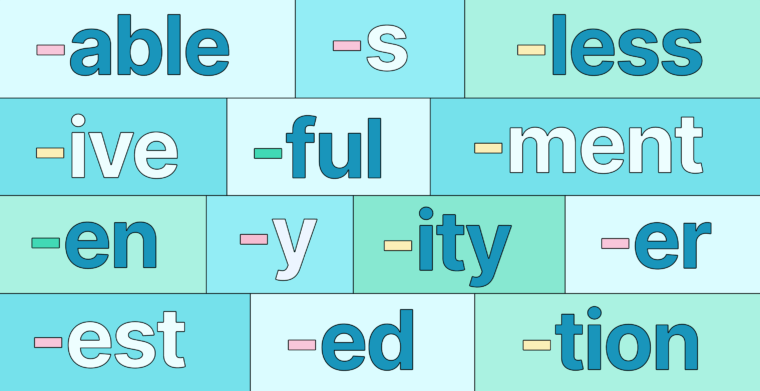 Suffixes play a major role in English, not only in grammar, but also in writing and reading comprehension. In this guide, we explain the rules and share examples of the most common suffixes in English. But first, let’s take a deeper look at what suffix means.

In English, the most common prefixes and suffixes are usually one or two syllables long (although the suffix -ology is three). The suffixes –s and –’s are not even one complete syllable; they simply add an ess sound to the end of a word.

While both suffixes and prefixes help to expand your vocabulary and writing skills, only suffixes are used for grammatical purposes, like conjugating verbs or pluralizing nouns.

When to use a suffix

However, you can’t use suffixes with every verb. For conjugation, irregular verbs usually rely on unique spellings rather than standard suffixes.

To create plural nouns, most of the time you add an –s or –es to show that you’re referring to more than one of a noun.

Ten cats are not enough! [more than one cat]

Just like with verbs, be careful with irregular plural nouns that use unique spellings for plurality. For example, the plural of child is not childs; it’s children.

Possessive nouns show ownership or a direct connection. For most singular nouns, you can show the possessive case by adding the suffix –’s. Plural nouns that already end in s can add just the apostrophe (’) to become possessive.

Keep in mind that possessive nouns are different from possessive pronouns and adjectives, which do not use suffixes.

Reflexive pronouns like myself or themselves use the suffix –self for the singular and –selves for the plural.

I gave myself a treat.

They pushed themselves as hard as they could.

I’m stronger than my brother, but the strongest in the family is our grandmother.

Not all adjectives use these suffixes. Adjectives of two or more syllables use the adverbs more and most instead of adding suffixes. If a two-syllable adjective ends in –y, the y is dropped and the suffixes –ier or -iest are used instead.

Most of the suffixes in English are used to show parts of speech, or word types. Frequently, you can add different suffixes to the same base word to change its type. For example, let’s look at different suffixes added to the adjective quick:

Suffixes are a necessary part of writing ordinal numbers correctly. If you’re showing something’s position in a series—such as first, second, or third—in informal writing you can add a suffix to the number instead of spelling it out.

There are two types of suffixes: inflectional and derivational. Don’t let those big words scare you—it’s actually quite simple.

Inflectional suffixes are used for grammatical purposes. These include all the word endings for verb conjugation, such as –ing and –ed; the additions for nouns, such as the plural –s; the possessive –’s; and the reflexive –self and –selves for pronouns. The suffixes for comparative and superlative adjectives (-er and –est, respectively) also belong to this group.

Derivational suffixes are used to change word types, such as changing a noun to a verb or an adjective to an adverb. Once you understand derivational suffixes, you’ll often be able to tell a word’s part of speech by its ending, even if it’s your first time seeing it.

Examples of suffixes in English: Inflectional

for present participles and to create gerunds

for the simple past tense and past participles

Suffixes for noun and pronoun grammar

the plural form of regular nouns

the possessive form of nouns

creates reflexive pronouns that refer back to the subject

Suffixes for comparative and superlative

the comparative form of adjectives for comparing two things

Examples of suffixes in English: Derivational

Suffixes are one or more letters added to the end of a base word to change its conjugation, word type, or other grammar properties like plurality. For example, you can add the suffix -s to the noun strength to make it plural (strengths) or add the suffix –en to turn it into a verb (strengthen).

What are the different kinds of suffixes?

When should you use a suffix?

Aside from changing the parts of speech, suffixes are used frequently in grammar. We use suffixes to show the plural or possessive forms of nouns, conjugate verb tenses, and demonstrate the comparative and superlative forms of adjectives.