Strikethrough and Why It’s So Popular 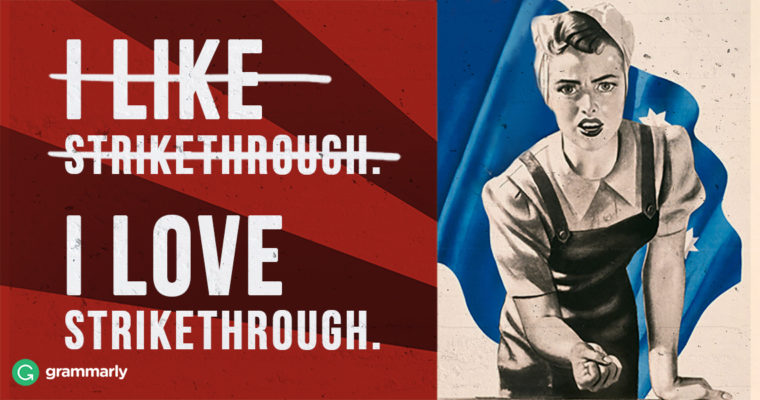 A very long time before any of us was born, there were no computers, typewriters, or printing presses. Books were written by hand, on pieces of specially treated leather called parchment or vellum. Back in medieval times, books were not only written but also illuminated, embellished by colorful drawings. And the lettering, even though you might not be able to read it easily, is a testament to the skill and patience of the scribes who wrote them.

Just think about the untold hours spent over rather expensive pieces of leather, writing page after page . . . only to make a mistake in the last sentence. Those things happened, of course, and there were a couple of ways scribes dealt with them. Sometimes, they were able to scratch the mistake off the surface of the parchment. But when that wasn’t an option, they sometimes resorted to drawing a line through the mistaken word—and the strikethrough was born.

If you like to spend a lot of time reading articles online, or hanging out on message boards or forums, you’ll notice that there’s usually nothing wrong with the words that have been crossed out with a strikethrough. This is because, today, on the Internet, a strikethrough is a way of saying something without really saying it. For example, a writer might use a strikethrough to indicate her own thoughts on the subject she’s writing about in a quick and annoying funny way. Did you catch that? The strikethrough is becoming the written equivalent of coughing and saying something at the same time, or mumbling something that you might not want to say out loud, but also wouldn’t mind for people to hear. You might also use the strikethrough to discern between official facts and either your opinions or things that are not official but are known by everyone. If you’re a journalist who does this, you might be accused of opinion journalism. You’re not likely to find a respectable media outlet that uses strikethrough in this way, at least not when reporting.

If you do see strikethrough text on the digital pages of a very serious media outlet, it’s possible you’re looking at information that was corrected after the original text was posted online. When this happens, some websites make a note of revisions at the bottom of the article. However, some use the strikethrough to the same effect—to show that they’ve made a mistake. So traditional media might still use the strikethrough in the traditional way, but new and user-generated media might use it for irony, humor, plausible deniability, or commentary.