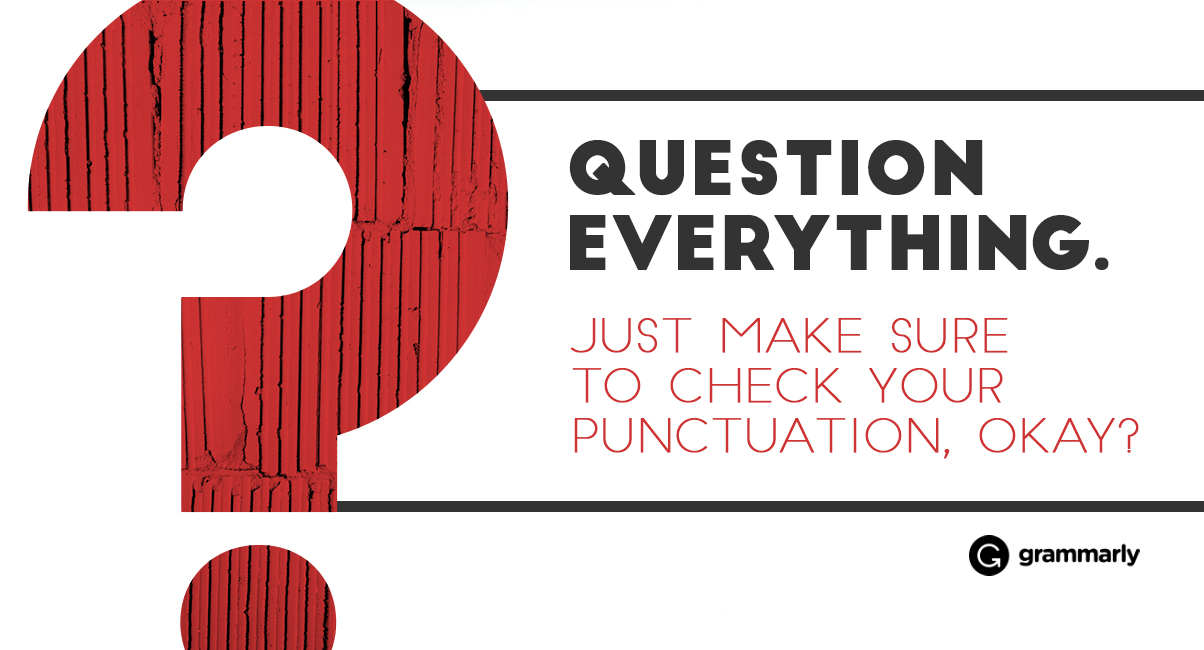 Without question marks, we’d miss out on all kinds of things: invitations, jokes, the Riddler . . .

No doubt, the question mark is a nice little piece of punctuation. And, best of all, it’s easy to use!

What Is a Question Mark For?

The main purpose of a question mark, perhaps unsurprisingly, is to indicate that a sentence is a question. Direct questions often (but not always) begin with a wh- word (who, what, when, where, why).

Why did the chicken cross the road? Who wants to know? Is it really that important?

But, not all questions are phrased as questions. Sometimes we phrase questions the same way we would phrase a declarative sentence. In speech, the way your voice rises at the end of the sentence usually makes it clear that you’re asking a question and not just making a statement. But in writing, you need a question mark to signal to readers that they should read the sentence as a question.

You came all this way to ask me about a chicken? Cross the road? Never!

Phrasing a question as an imperative or declarative statement is an emphatic way to express surprise, doubt, or disbelief.

When your sentence is a straightforward question, the question mark goes at the very end and serves as the terminal punctuation mark. But things can get tricky when you have other punctuation nearby.

The chicken asked, “Why is everyone so concerned about where I’m walking?” “What do you have to hide?” asked the nosy reporter.

If the question mark applies to the sentence as a whole instead of to the phrase inside the quotation marks, put it at the very end:

Haven’t you ever heard the expression “It’s a free country”?

This holds true even when you have a quotation containing a question:

“When I spoke to the chicken, she said ‘Why won’t you leave me alone?’” recalled the reporter.

And for a quoted question containing a quoted statement:

“What did the chicken mean,” the reporter wondered, “when she said ‘It’s a free country’?”

When you have a question mark that applies to both the quoted phrase and the rest of the sentence, just use one question mark:

Who said “Why did the chicken cross the road?”

I saw the chicken (or was it the rooster?) crossing the road.
The chicken wrote a bestselling memoir called My Road (published abroad as Who Needs a Crosswalk?).

When the question applies to the whole sentence, put it outside the parentheses:

Will the chicken cross the road again tomorrow (April 1)?

The chicken asked whether anyone wanted to cross the road with her. We all wondered why the chicken was so obsessed with that road.

As the chicken contemplated crossing the road, she asked herself why.

When a Question Mark Isn’t Enough

As useful as the question mark is, sometimes it’s tempting to embellish the end of your sentence with extra punctuation, especially when you’re trying to convey something really surprising and exciting.

Did you hear that the chicken crossed the road and found a million dollars on the other side??? Are you saying the chicken is a millionaire?! Can you believe it‽

Did you hear? The chicken found a million dollars on the other side of the road!

And that’s everything you need to know to go out and use the question mark. What are you waiting for?