Grammarly
Updated on
May 17, 2019Grammar 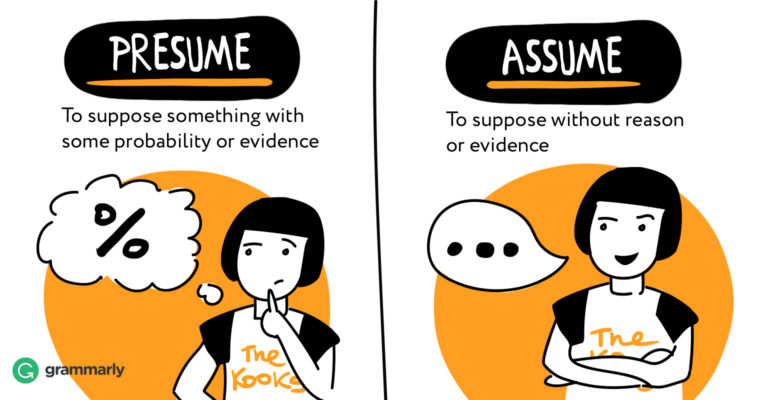 What’s the difference between “assume” and “presume”? “Assume” is to “presume” as a brother is to a sister. The previous statement is an analogy, a comparison of how two things relate to each other. Analogies are used to explain or to clarify. For those who confuse “presume” and “assume,” an analogy is just the thing!

Difference Between Assume and Presume

Just as a brother and sister have the same parents, “assume” and “presume” have the same etymological roots. “Assume” has Latin roots. It comes from a verb that means “to take up or adopt.” “Presume” derives from a Latin verb that means “to take upon oneself, to take liberty, or to take for granted.” Both Latin verbs can be traced to a common root, sumere, which means to put on or take up.

A brother and sister have similar features. “Assume” and “presume” are spelled in almost the same way, except for their prefixes. “Pre-” means “before.” The “as-” of assume might have been “ad-” originally. The “-ad” prefix means “to” or “up.”

A brother and sister are not interchangeable. Because of their unique personalities, parents may give them different chores. Assume and presume have different meanings and usages.

To assume means “to take for granted or to suppose,” and this is the meaning that leads to the most confusion between assume and presume. But that’s not the only thing you could be saying when you say assume—to assume might also mean to take responsibility for a duty, to appropriate, or to undertake a task. The same verb refers to adopting qualities or pretending to do so. So, you can assume a different identity, but also assume guard duty. In this sense, assume is synonymous with “take on” or “take up.”

To presume also means “to take for granted” or “to suppose,” and just like assume, it has another meaning as well. “To act or to undertake with undue boldness or without permission” is another meaning presume can take on. In law, it refers to accepting something as true in the absence of proof of its falsity.

Of course, brothers and sisters may share some responsibilities. Both “presume” and “assume” carry the thought of supposing or taking for granted that something is true. In that sense, presume is often used as another word for assume, and vice versa. But there is a slight difference even when they are used in this sense—when you presume something, it can be considered that you’re doing so on the basis of probability. When you assume something, you’re supposing without proof. After all, the adverb presumably means “by reasonable assumption.”

Examples: Assume and Presume in Sentences

Did the analogy help you learn the difference between “assume” and “presume”? Like brother and sister, they have the same parentage. While they share some definitions, they are unique as a brother and sister would also be. If this didn’t help, here are some examples of how assume and presume are used:

May’s deputy spokesman said Johnson would assume the position of duty minister after Philip Hammond, the chancellor, who took the role last week. —The Guardian

But even that argument is narrow-minded because it assumes women are monolithic and all have the same needs, interests and political positions. —Chicago Tribune

I hesitate to presume anything leggier than that, but a 2.8x multiplier like The Night Before gives Sausage Party a $37m debut weekend. —Forbes

Pressure has been mounting on policymakers to introduce presumed liability into civil law to protect vulnerable road users. —The Herald