What Is a Predicate, and How Does It Work? 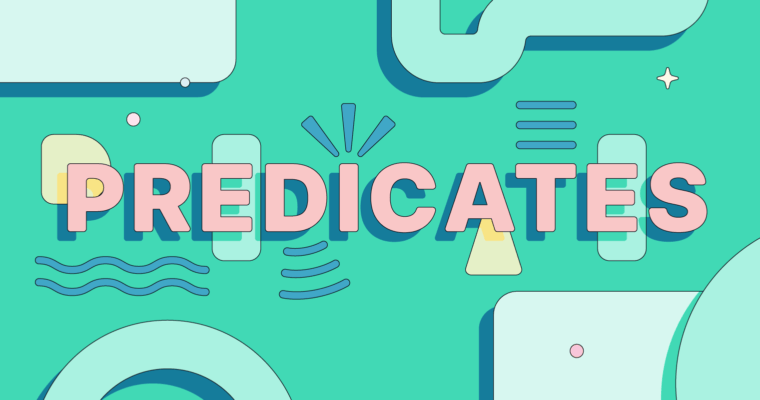 Predicates are one of the core building blocks of English sentences, so it’s good to understand how they work. Below, we answer your questions like, What is a predicate in a sentence? and How do you use a predicate? while explaining the different types of predicates through plenty of predicate examples.

What is a predicate in a sentence?

In English, a complete sentence or clause requires two parts: an action and the person or thing that’s performing the action. While the subject describes who is doing the action, the predicate describes the action itself. Along with subjects, predicates are a necessary part of English sentence structure.

Predicates always include at least one verb to represent the action, even if that verb is be. In complete predicates (which we explain below), a predicate can also include other words and phrases that modify the action, such as prepositional phrases or direct and indirect objects.

There are a few different types of predicates, each with its own unique qualities. Let’s take a more detailed look at each now.

What is a simple predicate?

A simple predicate is the most basic form of the predicate. It consists of only the main verb and auxiliary verbs, also known as helper verbs.

The little pig went to the market.

The simple predicate in this example is only the word went.

We have been waiting for hours!

In this example, the simple predicate includes the verb “waiting” and the auxiliary verbs “have” and “been.”

Modal verbs like can, might, will, or must are also auxiliary verbs, so they too are part of the simple predicate.

What is a complete predicate?

The little pig went to the market.

As you can see, the complete predicate can sometimes include nouns like “market” if they’re part of descriptive phrases that do not relate to the subject.

What is a compound predicate?

A compound predicate includes two or more verbs that all share the same subject.

He showered, shaved, and dressed in his finest clothes for his cat’s birthday party.

The verbs “showered,” “shaved,” and “dressed” all use the same subject, “he.” In this example, all the verbs belong to the same clause and therefore to the same compound predicate.

However, be careful with sentences that have more than one clause. In these cases, each clause has its own different predicate.

He showered, shaved, and dressed in his finest clothes for his cat’s birthday party, but the cat never showed.

In this example, there are two separate predicates: the original compound predicate and the second predicate “never showed” that uses a new subject, “the cat.”

What are predicate adjectives and predicate nominatives?

A predicate adjective is when the words following a linking verb are adjectives or adjective phrases that modify the subject.

Devaj was happy with the first date.

Similarly, a predicate nominative is when the words following a linking verb are nouns or noun phrases, again modifying the subject.

Amirah became the company’s first CEO under the age of 30.

How do you use a predicate in a sentence?

All types of sentences have predicates, but sometimes they are used in different ways.

Declarative sentences are the most straightforward: the subject comes before the simple predicate. This is the standard way to make a sentence and the most common sentence type. Likewise, exclamatory sentences follow this same format but with an exclamation point at the end!

Everyone loves my new outfit!

Meet me after class.

subject: although it’s not stated, we can assume the subject is you

complete predicate: meet me after class

Interrogative sentences, or questions, are when the predicate becomes tricky. When asking a question in English, you typically split up the predicate and stick the subject somewhere in the middle. A lot of the time, you put an auxiliary verb before the subject and the main verb after the subject.

Did you cry during the movie?

The word “did,” the past tense of the auxiliary verb do, comes before the subject “you.” The main verb “cry,” along with the rest of the complete predicate, follows afterward.

Why did I eat the entire pint of ice cream?

Interrogative pronouns sometimes work together with other nouns. In these cases, keep them together before the auxiliary verb.

What time did you take the dog out?

How do you identify the predicate in a sentence?

In the middle of a cold night during winter break, they quietly went to the dark basement.

When the ring was destroyed, the hobbits returned to their home.

Be careful with adjectives and adjective phrases that describe the subject. These are part of the subject, not the predicate.

At the age of thirty, Charlie had never eaten a pear.

In this example, the adjective phrase “at the age of thirty” is not part of the predicate because it describes the subject, Charlie, instead of the action of eating a pear. In this case, the complete predicate is only “had never eaten a pear.”

What is a predicate?

A predicate is the grammatical term for the words in a sentence that describe the action. Along with the subject, the predicate is one of two necessary parts that make a complete sentence.

How do you use a predicate in a sentence?

What are the different kinds of predicates?

What is an example of a predicate in a sentence?

GrammarWhat Are Contractions in Writing?

GrammarWhat Is the Present Perfect Tense?

GrammarWhat Are Modifiers? How to Use Them Correctly, with Examples

GrammarWhat Is a Participle? Definition and Examples
Writing, grammar, and communication tips for your inbox.