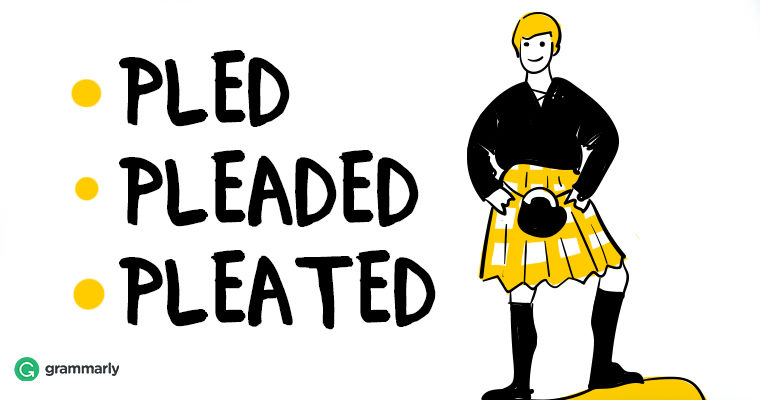 How serious does an argument about the proper way to form a past tense of a verb have to be for a bunch of lawyers to get involved? Not too serious, apparently, although the argument in question is a very heated one, and it shows no signs of cooling down. The word at the heart of all this controversy is the past tense of the the verb “to plead,” which comes in two forms—pleaded and pled. And both of them are correct. Sort of.

There are three major ways you can use the verb plead (pronounced PLEED): 1 To say that someone is making a serious and emotional appeal: “Everything that is right or reasonable pleads for separation. The blood of the slain, the weeping voice of nature cries, ’tis time to part. —Thomas Paine, Common Sense and Other Writings 2 To say that someone is arguing a case, usually in front of a court: “The development leaves no room for the victims to plead a case in a court of law.” —The Guardian 3 To say that someone is making a plea in court regarding their guilt or innocence: “Anibangel Molina, a Venezuelan businessman accused of defrauding dozens of investors, intends to plead guilty in the case later this month, according to Miami federal court records.” —Miami Herald

If you were to look up examples of what the past tense of the verb plead is, you’d see that there are two forms you can use: pleaded and pled. Sometimes, you’ll see both forms in the same publication: “Even though the guy had already pleaded guilty, even though this was a statement of emotional impact, not my actual testimony, the victim was not to be trusted.” —The New Yorker “One of the headliners of U.F.C. 187 is Anthony (Rumble) Johnson, an explosive light heavyweight with a troubling history of domestic violence: he pled no contest to a charge in 2010, and was accused again after a 2012 incident.” —The New Yorker However, you’ll notice that pleaded is the form that’s more commonly used by media outlets. And that makes sense if you consider the fact that The AP Stylebook and The Chicago Manual of Style both prefer the longer form. Oxford Dictionaries states that pled is the North American, Scottish, and dialect-specific way to form the past tense of plead. Merriam-Webster lists both forms. In the legal community, which seems to be very invested in the debate due to the frequent use of the verb plead in legal terminology, both terms are used more or less equally. Yet there is still much argument about which term is right, even though the outcome of the argument might not prove to be as consequential as other grammar issues have. But the bottom line is that pleaded is the commonly recognized past tense of plead, and pled is the form that can sometimes be used instead of it, especially within the North American and Scottish legal systems. If you have to follow a certain style guide, you work in the media, or you simply want to lay the issue to rest, you’d be better served by using pleaded.