Why Is the Oxford Comma a Heated Debate in 2017?

Daniel Potter
Updated on
May 7, 2019Grammar 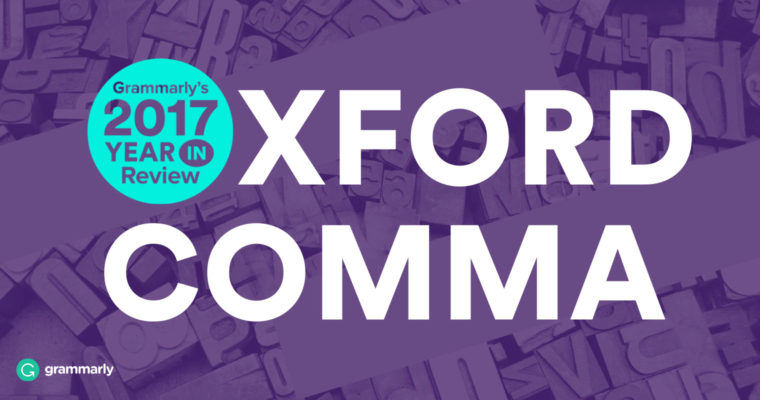 If you stare awhile at the string of characters that a sentence comprises, the squiggles lose all meaning. That humans somehow manage to agree on the use of these symbols well enough to communicate at all can seem miraculous.

But what about when we don’t quite agree—when it seems a writer has added a superfluous, bafflingly out-of-place comma, perhaps, or inexplicably used the wrong pronoun? Maybe they’re simply mistaken. Or maybe they’re in the vanguard of a futuristic linguistic trend that, decades or centuries hence, will be widely embraced and regarded as correct.

Our language is forever evolving, and 2017 was no exception. Two key authorities on proper usage—the Associated Press Stylebook and the Chicago Manual of Style—both made modernizing tweaks in their latest updates.

Examined closely, these offer glimpses into the past and future: “Often people think of language shifting over centuries,” says Grammarly copy editor Brittney Ross, “but some of these happened pretty quickly.”

We’ll give a rundown of a few of the recent changes that felt consequential, and then delve into one particularly contentious stylistic faultline we’re still watching—the Oxford comma.

Both style guides are through with capitalizing “internet” and “web.”

Associated Press editors made this move last year, and the Chicago Manual has now followed suit. Not to make anyone feel old, but if you remember the sound of a dial-up modem, you’ve witnessed the arc of these terms trending from exotic to mundane. Same goes for this one:

Chicago Style lagged a few years after the AP made this shift, but it’s now unanimous—no hyphen required. Similarly:

AP Style now has an entry for esports.

The e is not a typo; we’re talking about competitive multiplayer video games. One could argue that 2017, the year of Starcraft: Remastered, approximates a 20-year anniversary for esports, which have now become commonplace—and so lucrative that popular streamers on Twitch have their own agents.

It will likely be years before you get a chance to ride in a self-driving car, but in the meantime, journalists can’t stop thinking about them. (Guilty.) Just don’t call them driverless unless there truly isn’t a human onboard who can take the wheel.

They can now be singular—sometimes.

AP and Chicago Style editors both cracked this door open in 2017, but neither yet seems ready to charge fully through it, prompting the Columbia Journalism Review to declare “it’s the middle of the end for the insistence that ‘they’ can be only a plural pronoun.”

The style guides allow for a singular they when referring to someone who doesn’t identify as he or she, but they also note you can often just write your way around this by reworking the sentence. Here are highlights from the new AP entry:

They, them, their — In most cases, a plural pronoun should agree in number with the antecedent: The children love the books their uncle gave them. They/them/their is acceptable in limited cases as a singular and-or gender-neutral pronoun, when alternative wording is overly awkward or clumsy. However, rewording usually is possible and always is preferable…

In stories about people who identify as neither male nor female or ask not to be referred to as he/she/him/her: Use the person’s name in place of a pronoun, or otherwise reword the sentence, whenever possible. If they/them/their use is essential, explain in the text that the person prefers a gender-neutral pronoun.

Whether this shift heralds the widespread adoption of what’s known as the “epicene they,” we’ll have to wait a few more editions and see.

Whither the Oxford comma?

No discussion of warring (okay, not really) stylebooks would be complete without considering the Oxford (or serial) comma. For the uninitiated, that’s the last comma in a list of three or more things, as in this example:

“My goals for 2018 are to learn how to use commas like a champion, to run a half-marathon, and to get good at poaching eggs.”

Whether that last comma is necessary is hotly debated. It featured in a 2008 lyric by the band Vampire Weekend that might be politely paraphrased as “Who gives a hoot about the Oxford comma?” And this year a single Oxford comma was even the subject of a court fight with millions of dollars at stake.

Chicago style recommends its use in almost all instances, while AP style leans somewhat against it. The AP’s position is squishy, though, as it recently noted in a series of tweets that began “We don’t ban Oxford commas!” Rather, they say you should use it when it adds clarity and ditch it when it’s nonessential.

As AP Stylebook lead editor Paula Froke told a roomful of colleagues this spring, “The stylebook doesn’t ban the use of a serial comma. Whether you put it in at all times is a different debate.” That’s hardly a hard-and-fast declaration, but the Oxford comma is divisive, as anyone who’s served as a copy editor at a student newspaper can attest. Brittney, Grammarly’s resident style maven, puts it this way:

“Oxford commas are like the Ugg boots of the punctuation world. People either love them or hate them or don’t know what they are.”

Brittney notes that Grammarly is pro-Oxford comma, in part because many long-timers (“the OG Grammarly users”) have voiced fondness for it. “It’s really carried over into our blog, social media, emails,” even in settings where AP style might be more typical: “We’ve kept the Oxford comma just to keep things consistent.”

And consistency, alongside clarity, she says, should be more important than pitting one stylistic tribe’s abstract symbols against another.

“When it comes to AP vs. Chicago style, I think a lot of people forget the importance of the word style. The important thing to remember is when the style isn’t working for you, you should do what works.”

LifestyleThe Most Memorable Words and Sayings of 2021

LifestyleA Pandemic Guide to Communicating About the Holidays with Family