What Does Meta- Mean? 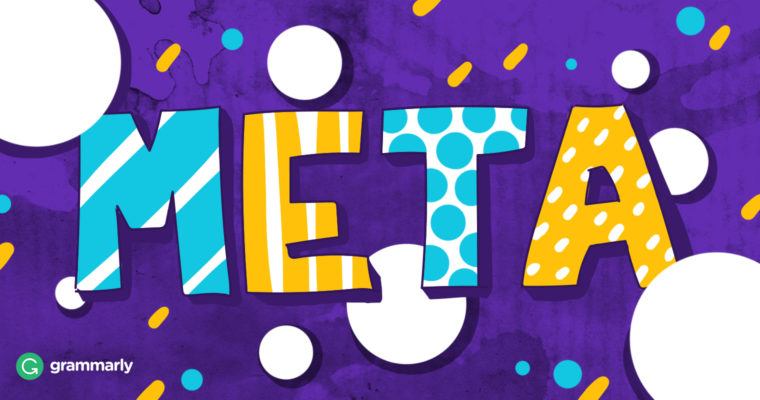 Meta is a word which, like so many other things, we have the ancient Greeks to thank for. When they used it, meta meant “beyond,” “after,” or “behind.” The “beyond” sense of meta still lingers in words like metaphysics or meta-economy. But that’s still not the meta most of us come across today.

One of the more popular uses of meta today is for the meaning best described by the formula “meta-X equals X about X.” So, if we take the word “data” for our X, and add the prefix meta- to it, we get metadata, or “data about data.” A meta-text is a text about texts, metacognition is thinking about thinking, and a meta-joke is a joke about jokes. The self-reflection sense of meta has also given rise to the use of the word as a standalone adjective, where meta is used to describe something that’s self-reflective or self-referencing.

The self-referencing sense of meta seems especially popular in art. In its simplest form, a book in which a character is writing a book or a movie in which a character is making a movie can be described as meta. Some works are more meta than others—the movie Birdman, for example, is a movie about an actor who played a superhero in a movie and who now tries to rekindle his career in theater, and that actor is played by an actor who really did play a superhero in a movie and is now trying to rekindle his career in a movie that looks more like a play than a movie.

In the world of gaming, meta is used in two ways. Meta can be used as an acronym for “most effective tactics available,” and calling something “meta” means that it’s an effective way to achieve the goal of the game, whether it’s to beat other players or beat the game itself. Meta can also be short for metagame, which is using information about the game, derived from the world beyond the game or its rules, to influence the outcome of the game or gain a competitive edge.

ProfessionalsRecent Grad? Here's How to Approach Your Job Search

LifestyleGrammarly’s Writing Encyclopedia: 2019 in Language From A to Z

GrammarAn Argument for Exclamation Points (!!!)
Writing, grammar, and communication tips for your inbox.