Invoke and evoke are two words that are very easy to confuse. They sound kind of similar when you say them—[in-vohk] and [ih-vohk]. They both come from the same root word, which can be traced to the Latin word for “voice”—vox. Their meanings are only slightly different, but it’s this slight difference that makes people uncertain about when to use which. When we’re invoking or evoking something, it means we’re calling for or upon it. But the way we’re doing it and the effects we would like to achieve are slightly different. For example, if we would like to invoke the spirit of Mozart, then we would want to summon the famous composer’s spirit into being (or, if séances aren’t your thing, we might simply mention his name to make people feel a certain way about what we’re describing). On the other hand, if we would like to evoke the spirit of Mozart, we would need to create or play music that reminds people of Mozart and his style. The difference between the two could be summarised like this: Invoke is active and direct, and it can have a material effect; Evoke is passive and indirect, and it usually has an emotional or intellectual effect. 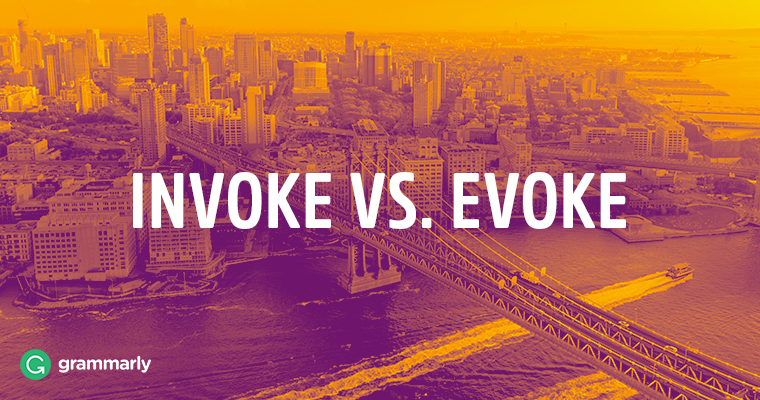 How to Use Invoke

Invoke has several meanings and can be used in several different ways: To call upon for aid: “From thence it is the God of breezes fair or foul is first invoked for favourable winds.” —Herman Melville, Moby-Dick To summon something into existence, to conjure: “Mario Cardona, 36 from Victoria, Gozo, today was acquitted of fraud in what can be seen as a bizarre attempt to invoke a 30,000 year-old demon with the name ‘Bezuzu’, to help a woman, Carol Milroy, get back at then husband Iain Gilbert Milroy following an alleged affair in October 2014.” —The Malta Independent To cite something, usually a law: “One decision is absolutely in London’s hands: when to begin the process of withdrawal by invoking Article 50 of the Lisbon Treaty.” —The Wall Street Journal To bring about or cause: “The ‘Devil’s Bible’ continues to invoke fascination and fear hundreds of years after it was written.” —News.com.au

How to Use Evoke

Evoke also has several meanings, and it can be used in several ways: To call to mind an emotion, memory, or image: “In the hideous picture which its presence evokes it seems to be most terribly a part of what it does. It is the executioner’s accomplice; it consumes, devouring flesh and drinking blood.” —Victor Hugo, Les Miserables “Baaba Maal’s tribute to Nelson Mandela, “Njilou,” begins with vocalisations that evoke traditional music from Senegal, but builds, assuredly and with the ecstatic cooperation of his audience, into a vision of a united Africa.” —The Guardian To call forth or bring about (this meaning is the closest to the meaning of invoke): “Depending on the context in which it is placed, drinking can signify evil, moral depravity or a slide into a personal hell. It can also be used evoke laughter, since it makes the drinker do funny and stupid things.” —The Wire