A Guide to Impersonal Verbs, With Definitions and Examples 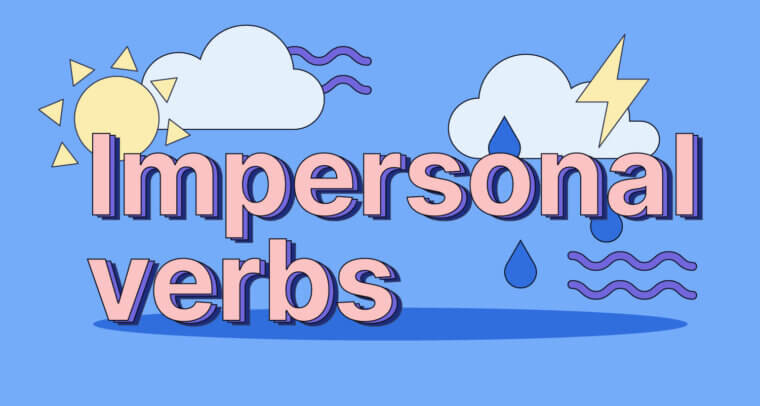 Impersonal verbs are verbs that do not use a specific subject, but instead use the generic subject it. They’re often called “weather verbs” or “meteorological verbs” because they’re commonly used to describe the weather, like in the impersonal verb examples “it’s raining” or “it’s snowing.”

Although they’re fairly straightforward, impersonal verbs can be confusing if you don’t know how they work. Below we explain what they are and how to use them, plus we provide an impersonal verbs list so you can learn to recognize them.

What are impersonal verbs and what is their function?

Unlike other verbs, impersonal verbs don’t use what’s called a “determinate subject,” which is a subject that describes something specific, like the person or thing doing an action. Instead, they mostly use the impersonal pronoun it, which does not represent anything in particular. In other words, impersonal pronouns don’t specify who or what does the action, the action just happens on its own.

Impersonal verbs usually refer to the weather or other general conditions, like light and dark, but they can also be used with certain idioms or common phrases, which we will explain later.

In other languages, stating the subject of a verb is sometimes optional, but English requires the subject be stated for all sentences except imperatives (commands), which use the “understood” second-person subject. So while in Spanish you can say that it’s raining by shouting “llueve!” in English it’s incorrect to shout only “is raining!” because that’s not a complete sentence. You need to add the impersonal pronoun it as the subject.

Some verbs are always impersonal, but sometimes normal verbs can act like impersonal verbs depending on how they’re used. For example, the verbs be and happen can act as impersonal verbs when used to talk about the weather or certain general conditions.

Why is it so hot today?

It’s darker in here than it is outside.

It happened to rain during our camping trip.

So it’s come to this.

Likewise, the verb phrase looks like can act as an impersonal verb when used in a generic sense or when used to talk about the weather.

The verb occur has one particular meaning that causes it to act as an impersonal noun: when something comes to mind.

It occurred to them too late that the whole thing was a scam.

Be careful not to confuse impersonal verbs with their noun forms. For example, the impersonal verb snow can also be used as a noun, in this case the mass noun snow. Although spelled the same, the verb snow functions very differently than the noun snow, so you’ll have to consider the context to tell the difference.

Why are they called weather verbs?

Some weather verbs are not always impersonal and have other meanings unrelated to the weather. For example, pour can be used to talk about moving liquids, and in this case it is not impersonal and requires a standard subject.

The scientist poured the acid into a safe container.

However, when the meaning of pour is “to rain heavily,” pour becomes an impersonal verb.

It’s pouring outside, so I’m taking an umbrella.

Impersonal verbs, however, have a valency of zero. That’s what makes them special. The only reason they take a subject at all is because English grammar rules require it.

It snows all the time here.

It has snowed every day this week.

It will be snowing all month.

It can snow as long as the temperature stays cold.

As you can see from these examples, impersonal verbs use the third-person singular conjugation to match the subject it, no matter the tense, even when used with the contraction it’s.

There is only one exception to this rule, which we will address below.

As mentioned above, some normal verbs can act impersonal depending on their usage. These include some irregular verbs or expressions that use irregular verbs, such as the idiom go without saying or the verb get when used to describe the weather or general conditions. Even when acting as impersonal verbs, irregular verbs still use their same unique conjugations.

It goes without saying that smoking is dangerous.

I thought it went without saying, but I guess not.

In summer it gets dark in the late evening.

Why has it gotten dark already?

They say all that glitters is not gold.

They say spring is a time of new beginnings.

Luckily, there aren’t many impersonal verbs, so you shouldn’t have too much trouble using them. Here’s an impersonal verbs list, featuring the most common ones in English. Words and phrases with asterisks mean that they are not always impersonal, depending on the meaning.

What are impersonal verbs?

Impersonal verbs are verbs that do not use a specific subject, but instead use the impersonal pronoun it as a generic subject.

How do impersonal verbs work in English vs. other languages?

Because English sentences almost always require a subject, impersonal verbs must use a generic subject, like the impersonal pronoun it. In some other languages, subjects are optional, so this rule does not apply.

Why are they sometimes called weather verbs?