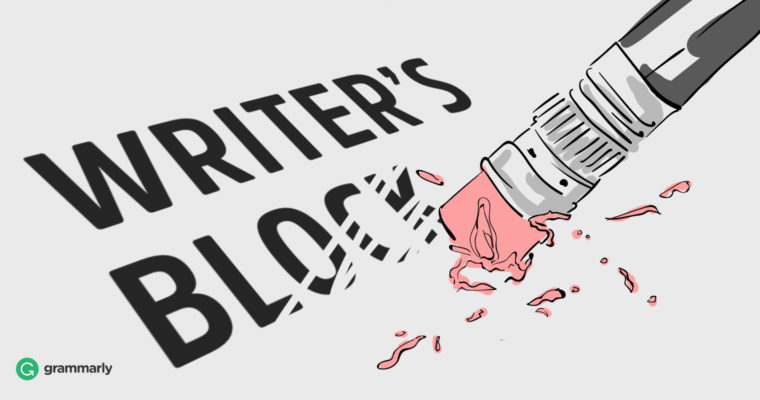 You’re sitting at your desk, staring at a flashing cursor and waiting for the words to flow. Every now and then, you write something, then mercilessly edit it or delete it all together.

You roll your head back and forth to work the kinks out of your neck and sigh. The words just won’t flow. You’re convinced you’ve got a serious case of writer’s block. But do you really?

Writer’s block is a myth.

I’m going to show you a trick to defeat writer’s block. First, place your fingertips on your keyboard. Once you have them comfortably poised over the home row, close your eyes. Take a deep breath, and repeat these seven magical words until you’re ready to write:

Better now? If so, then back to writing for you, word monkey! If not, have a seat and let’s talk shop.

I’ve been where you are. I’ve stared at my screen, dazed, until I felt like I could hear the tiny blood vessels in my eyes bursting. (No, you can’t actually hear them. It’s a simile. You with me so far?) I’ve convinced myself that the reason my works-in-progress were not progressing was that I had stumbled upon a horrible, irrevocable creative block, the likes of which I would never overcome. But then I did some soul searching.

Writer’s block, it turns out, is just an excuse for not writing. There’s a reason you never hear of librarian’s block or electrician’s block. Even when librarians and electricians feel less than inspired by the work at hand, they do it anyway.

We all have states of flow—those magical times when we’re bursting with creativity as if the muses themselves are whispering into our ears. And yes, those times are magical. But they’re also few and far between. Ultimately, those inspired times are not what being a writer is about. You’re not just taking dictation for the muses, dear wordsmith. The muses are fickle. It’s your job to write whether they show up or not.

Here are five ways to persevere and write even when you’re feeling stuck.

1 Give yourself permission to write terrible stuff.

If you sit around waiting for those mythical times when you’re at your absolute best, you’ll almost never get any writing done. So, just give yourself permission to be awful, and then write anyway. You’re going to edit later either way, right?

What I try to do is write. I may write for two weeks ‘the cat sat on the mat, that is that, not a rat.’ And it might be just the most boring and awful stuff. But I try. When I’m writing, I write. And then it’s as if the muse is convinced that I’m serious and says, ‘Okay. Okay. I’ll come.’

Accomplished writers don’t sit around waiting for inspiration—they write whether the words are flowing or not. The only sure way to dig yourself out of a creative hole is to write through it.

Set yourself a goal that’s so easy you have no chance of failing. Tell yourself, “I’ll just write for five minutes without stopping.” Or maybe challenge yourself to write one full page, or even just a single paragraph. If you’ve done the goal-setting right, you should knock this writing task out easily.

Then stop. Only do as much as your goal dictates.

The next time you sit down to write, make your goal just a little more ambitious. Don’t go overboard, though. You want to establish a pattern of easily achieving your goals. Then, once you’ve got a few wins under your belt, go ahead and write for as long as the words and ideas keep coming. Your block has been vanquished!

Keep a small can of WD-40 on your desk—away from any open flames—to remind yourself that if you don’t write daily, you will get rusty.

3 Quit while you’re ahead.

It sounds counter-intuitive, but try quitting when your writing is going along splendidly and you’re excited about what’s coming next. If you stop writing when you run out of ideas, you’ll likely be just as out of ideas the next time you sit down to write. Instead, stop when you’re brimming with them. You’ll be energized and ready to get back to it when the time comes.

The best way is always to stop when you are going good and when you know what will happen next. If you do that every day . . . you will never be stuck. Always stop while you are going good and don’t think about it or worry about it until you start to write the next day. That way your subconscious will work on it all the time. But if you think about it consciously or worry about it you will kill it and your brain will be tired before you start.

—Ernest Hemingway
Here’s a tip: When I quit writing for the day, I leave myself notes right on my manuscript telling me where I plan to go next. Not only does this give me the security of knowing that my next great idea will be waiting right where I left off, but it frees my mind to stop obsessing over it in the meantime.

If you’re not on a deadline, having several different creative endeavors that you’re working on can help you get unstuck. If one project stops clicking, simply switch to another until you get your momentum back. Either way, you’ll be making progress.

Sometimes a project needs a little time to think, a little time to breathe. So what I tend to do when that happens is I always have two or three other things that I’m doing at the same time. I can just go to one of the ones that’s working. Which is how I give this appearance of being prolific.

Pounding your head on your desk doesn’t get the words unstuck.

What does help unwedge those unruly words is physical activity. Even just taking a walk can give your creativity a boost.

I really wish someone had told me earlier that there’s a relationship between writing and exercise. Writing involves you being completely, revoltingly sedentary while your brain works overtime. But when you exercise, it’s the complete reverse – you more or less become brain dead while your body works like a bastard not to drown/collapse on the treadmill/die. Then after I exercise, I always come back to my laptop and it’s like I’m seeing the story for the first time. I know what I need to do.

You’re not blocked, you just can’t think of anything good to write.

In the 1986 John Hughes classic, Ferris Bueller’s Day Off, Ferris phones his friend Cameron to insist that he join him for a fun day of skipping school. Cameron declines because he’s already at home sick, and then hangs up the phone and moans, “I’m dying.”

As if psychic, Ferris calls back and says, “You’re not dying, you just can’t think of anything good to do.”

Your writer’s block is Cameron—it can’t think of anything good to do. And yet, anyone who’s seen Ferris Bueller’s Day Off knows that Cameron not only goes on to have a memorable day, but to trash his dad’s beloved Ferrari and, in the process, have a major life epiphany. So, the next time you’re feeling stuck, try some of these techniques to see your way clear.