A Short History of the Long S 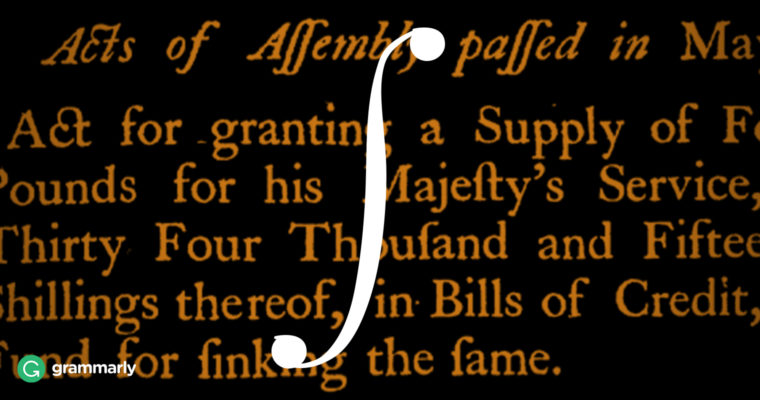 Looking at the original Bill of Rights, one of the defining documents of the United States of America, you might notice two things. One, it is written in beautiful longhand—the type of longhand that makes you think it’s a shame people don’t appreciate beautiful handwriting anymore. And two, there seems to be an error in the very first word of the document. It appears that the first s in Congress was written as an f: Congrefs. If you take an even closer look, you might notice that even that “f” isn’t written as it should be—the horizontal line in it, the bar, only extends to the left side of the letter.

That letter that looks like an f to us today is actually an s, one of the two that were in use at the time the Bill of Rights was written. It’s called the long s.

The Story of The Ss

The origins of the long s, ſ, can be traced all the way back to old Roman cursive, a script used in Rome for everyday, informal writing from the first century AD to about the third century. In this script, the letter s was written as a vertical downstroke with a small curve at the end of it, and a diagonal upstroke at the top. It looked almost like a check mark, with an added diagonal line on top of it. In new Roman cursive, which developed between the third and seventh century AD, s was written almost as we write the lowercase r today: a vertical downstroke, followed by an upstroke with a curve. This was the type of s that found its place in the Carolingian script, which was developed in the court of Charlemagne in order to provide a uniform and legible form of writing. It’s in this script that the r-like form evolved into the long s we see in the Bill of Rights.

If you’re wondering what the s we know and use today was doing during that time, don’t worry, it was there. It’s just that it was used as the uppercase S, mostly, up until the eleventh or twelfth century. Around that time, the long s started to be used when the letter appeared at the beginning or in the middle of a word, and by the fifteenth century, this practice seemed to become established. So, the word “sound” would have been written as “ſound,” and the word “rest” would have been written as “reſt.” The short s (also known as the round s) was used at the end of a word, or after a long s which appeared in the middle of a word. That’s why the word “processes” would have been written like this: “proceſses.”

Why Do We Have Only One S Today?

The way the long s was used changed over time. The Bill of Rights dates to the late eighteenth century, and in it the long s appears only in words that have a double s. “Congress” was written as “Congreſs,” “less” as “leſs,” and “necessary” as “neceſsary.” “Compensation” was written the same way we do it today, as were the words “representative” and “first.”

In fact, the late eighteenth century saw the long s dropped en mass from printed works. By the early nineteenth century, most printers had only one type of s in their arsenal—the short one—and the people who made the type for the printing presses stopped making the long s. The process was slower and more gradual in handwriting, though, where the long s hung on until the second half of the nineteenth century.

Why did the long s have to go away? Well, if you think about it, it makes perfect sense. The long s and the short s both represent the same sound, so you have an unnecessary doubling of letters. If you had to choose between the two, would you choose the one that’s easily confused with the letter f or would you choose the one that can’t be confused with any other letters? You’d choose the letter that makes it easier to read, and that’s the short s. Still, it’s good to know the history of the long s, if for no other reason than to understand why it appears in the Bill of Rights.

WritingRecent Grad? Here's How to Approach Your Job Search

LifestyleEverything You Need to Know about Father's Day
Writing, grammar, and communication tips for your inbox.