What Is a Gerund? Gerund Definition and Examples 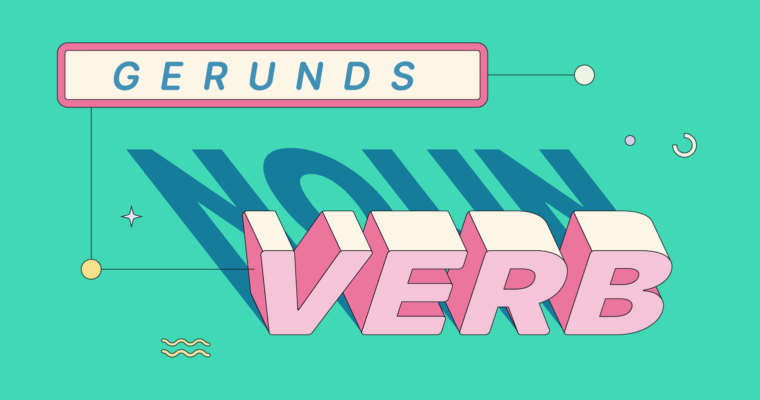 They bonded over their shared love of hiking.

I hope to set a new record in swimming.

What do these two sentences have in common?

They both end in verbs, but those verbs aren’t just verbs. They’re gerunds. Think about what these verbs are doing for a moment—they aren’t describing the action in these sentences like verbs normally do. That’s because gerunds don’t describe action—they act as nouns.

Gerunds are a flexible, useful type of word because they enable us to speak and write about actions in a more abstract way, positioning those actions as reasons for specific outcomes, hobbies, and receivers of subjects’ actions.

What is a gerund and what is its function?

A gerund (pronounced JER-und) is a verb that’s acting as a noun. By that, we mean that the verb—the word that describes the action that’s happening, like “biking,” “thinking,” “running,” or “speaking”—becomes a thing, a concept that can now be the sentence’s subject, direct object, indirect object, or the object of a preposition.

It doesn’t stop being a verb, but the role it plays in a sentence shifts from describing the action to being a focal point.

Here are two examples of sentences that contain gerunds:

As you see in these examples, gerunds are verbs in the present participle form. This means they’re the root verb + “ing”:

But that’s not what makes them gerunds. To be a gerund, a verb has to act as a noun in its sentence. Present participle verbs are not gerunds when they describe the action in a sentence, like the verbs in these:

Gerunds aren’t the only instance where a word (or group of words) plays a role that’s typically taken on by another type of word. For example, an adverbial clause is a clause that functions as an adverb. An adjective phrase is a phrase that describes a noun the way an adjective typically does.

A gerund phrase is a phrase that contains a gerund and a modifier or an object and, in some cases, both of these. Here are three examples of gerund phrases:

A gerund phrase, just like a gerund, acts as a noun in a sentence. Take a look at how these gerund phrases play this role:

A phrase is a small group of words that communicates a concept but can’t be an independent sentence on its own. There are lots of different kinds of phrases in English, like verb phrases, adjective phrases, prepositional phrases, and noun phrases.

Gerunds can also be used in conjunction with phrasal verbs, two-word phrases that combine a verb and an adverb or preposition to communicate a unique concept that can’t be expressed by either of the words individually. Common phrasal verbs include:

And here are a few sentences that demonstrate how phrasal verbs and gerunds can work together:

There are six types of gerunds:

1 Subject: Biking is my newest hobby.

5 Object complement: I see myself biking every day.

6 Object of a preposition: I blocked out a few hours this Sunday for biking.

Gerunds are almost as versatile as actual nouns. Just like nouns, they can be replaced by pronouns:

Gerunds aren’t the only kind of verb that act as nouns. When you need to use a verb as a noun, you can also turn it into an infinitive.

An infinitive is the word “to” + a verb’s root. There are two ways you can use an infinitive: as a noun that communicates a single concept and as an adjective to describe a noun within the sentence. Here are a few examples, with infinitives bolded:

As you can see, infinitives are similar to gerunds, but they aren’t exactly the same. In a sentence where the infinitive acts as a noun, you can easily swap in a gerund and it will still make sense:

But you can’t always go the other way—notably when the gerund is the object of a preposition: “I blocked out a few hours this Sunday for to bike.”

You could remove the preposition in this sentence (“for”) and it would make sense: “I blocked out a few hours this Sunday to bike.” But if you do this, you no longer have a prepositional phrase.

In contrast, some transitive verbs can work only with an infinitive. Take a look at these examples:

An easy rule to keep in mind is that you should use an infinitive when you’re discussing something that’s abstract, not real, or only might happen:

And use a gerund when you’re discussing something that’s specific, real, or has already happened:

How do you create a gerund?

Gerunds are incredibly versatile. Here are a few more examples of gerunds and gerund phrases in sentences:

When you’re writing, whether it’s an essay, a short story, a blog post, or even an email or text message, you’ll probably naturally use gerunds. Next time you write something, challenge yourself to pick out the gerunds in your work. They can be tricky, but being able to recognize them will make you a stronger writer and reader.

What is a gerund?

A gerund is a verb in its present participle form (root verb + “ing”) that acts as a noun in a sentence.

What are the different kinds of gerunds?

Writing is easy with Grammarly

Pop quiz time! What’s the gerund in the header above?

If you said “writing,” you’re correct. And when you’re confident that your writing is free of grammatical errors, digging deeper and tackling bigger ideas in your work doesn’t seem quite as daunting. Grammarly catches grammatical mistakes you may have missed and makes suggestions you can use to polish your first draft into perfectly publishable prose.